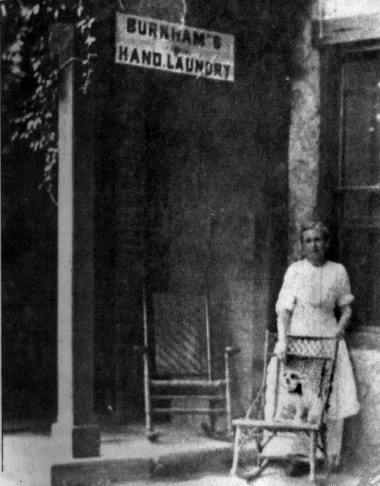 SARATOGA SPRINGS — On Thursday, July 2, Matthew Veitch, Chairman of the County Board of Supervisors, together with his two brothers Kevin and John, presented the Saratoga Springs History Museum with the sign from Burnham Family Laundry which was located at 123 Maple Avenue.

123 Maple Avenue is surrounded in history. The building was built in 1826 by John Bryan, son of Saratoga Spring’s first permanent settler Alexander Bryan. Following the Bryans, the building was home to a succession of businesses, including the Burnham Hand Laundry, was operated by Beatrice Veitch. The building was purchased by the Veitch family in 1954 and remained their home until 1979 when it became the Olde Bryan Inn. James Parillo, Museum Director said “We can’t thank the Veitch Family enough for recognizing the importance of preserving this sign and contributing it to the Museum so we can share it with the community.” Matthew Veitch said “We are so proud today to be turning over this small piece of Saratoga’s History to the Museum. As a child, I remember this sign in my Grandparents’ basement, and once I became a trustee of the museum, I knew that in order to protect it for future generations, it should be given to them so they could properly care for it. My Grandfather would be happy to see that it has survived all these generations.”

Petty Officer 1st Class Sean Wells is part of a unique group of Americans who serve their country in uniform part-time while also working full-time jobs outside of the military. Created in 1915, the Navy Reserve has played a major role in nearly every conflict the U.S. has been involved with during the past decade.

“I went from being active duty for 13 years and wanted to finish my time to retirement,” said Wells. His current assignment is with Naval Mobile Construction Battalion 27, based in Gulfport. “I enjoy being able to participate in hands-on work,” said Wells. As a reservist, Wells is continually balancing both the expectations of working as a Sailor and as a civilian. Wells said that he gained unique skills and experience on both sides and that he’s become a better-rounded person because of it.

“Being in the reserves helps me to experience different things on a day-to-day basis,” said Wells.

Wells’ commanding officer, a reservist himself, said he is impressed every time the battalion meets to train throughout the year by the professionalism of his sailors.

Since Sept. 11, 2001, there have been more than 70,000 Selected Reserve mobilizations, along with an additional 4,500 deployments by full-time support sailors, including more than 8,000 who have done a second combat tour. Since the Reserve’s establishment in 1915, five U.S. presidents have served in the Navy Reserve.