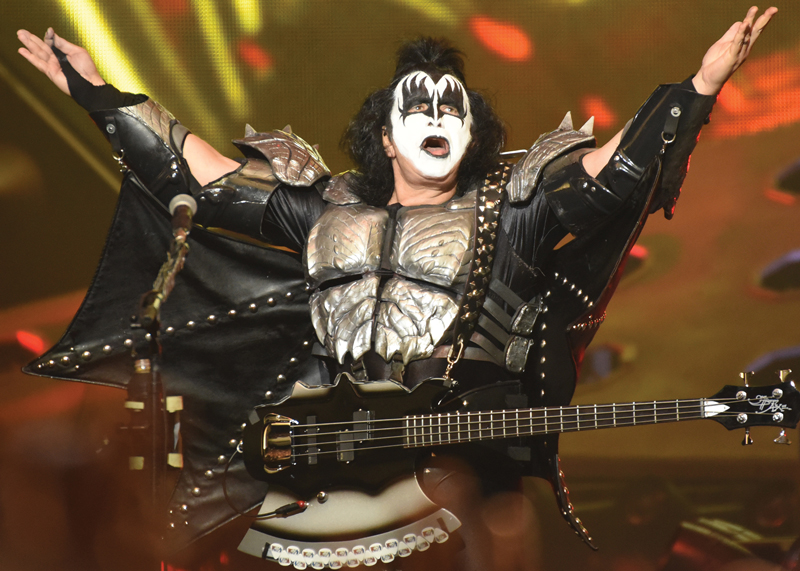 All photos by SuperSource Media.

SARATOGA SPRINGS — As the clock inched closer to midnight on Aug. 24, Gene Simmons was serenaded by several thousand of his closest Saratoga friends with a group sing of “Happy Birthday,” celebrating the conclusion of the bassists’ 70th year on earth.

Simmons and bandmate Paul Stanley – two of the four founding members of Kiss – performed Saturday night at Saratoga Performing Arts Center, in what is anticipated as the group’s final regional appearance.  The group had performed at the same venue while on their “Farewell Tour” in 2000.This time around, it’s the “End of The Road Tour,” which is ultimately expected to conclude at the end of the calendar year.

Saturday night, the band emerged atop the stage alongside a fury of bombastic explosions, heat-bearing flames and a slew of pointed laser beams, opening with “Detroit Rock City.”

Overall, the 20-song set took mightily from the group’s early years, with a dozen titles dating to the 1970s, including a trio - “Deuce,” “Cold Gin,” and “Black Diamond” released on Kiss’ 1974 debut album. More than 46 years have passed since the band first performed on stage, which took place at a club on Queens Boulevard on a January night in 1973.

Gene (The Demon) Simmons was in full tongular assault throughout - a menacing God of Thunder bound in some feathery sort of breast plate and spewing blood in the stage haze of puke-green illumination.

For his part, Paul (The Starchild) Stanley, when not slinging ‘round his six-string signature guitar with the sparkles, provided voluminous quantities of between-song banter. “Let Me Hear Ya Say Yeah!” and “How Ya Doin’ Saratoga!” his two most popular go-to incantations. Drummer Eric (The Cat Man) Singer, and guitarist Tommy (The Spaceman II) Thayer completed the Kiss 2019 quartet.

Kiss is an arena show that’s played for decades and, depending on your point-of-view, is kin to a long-running staged musical, or a band on auto pilot, albeit blending with a mix of catchy choruses.

Among the high points was Kiss’ recreation of their song “Deuce” - the band performing in sync with a video performance of their similar staging of the tune decades ago, the “Rock and Roll All Nite” anthemic conclusion, and Stanley’s across-the-amphitheater zip-line which delivered him atop a small platform stage for performances of “Love Gun,” and “I Was Made For Loving You.”

SARATOGA SPRINGS — Fifty years after the weekend he famously played Woodstock – that’s 18,270 days, give or take – Carlos Santana staged a concert at Saratoga Performing Arts Center that kept the crowd packed into the amphitheater on their feet for most of the near two-hour show.

It was an ode in tribute to that three-day celebration of Hippiedom in 1969 during which Santana emerged on the SPAC stage. The stage-side video screens flashed through a ten-minute introductory interlude - accompanied by the horn-musings of a cool jazz soundtrack - that displayed groovy lights and peace symbols, barefooted children, fringe vests, and hordes of denim-wearing, mud-sliding, granola-eating Woodstock festival goers.

Fittingly, as Carlos Santana brought his 10-member entourage onstage to a live performance of “Soul Sacrifice” as the video screens simultaneously depicted him performing the same tune at the Woodstock festival all those years ago.

Carlos excelled in his six-string virtuosity most notably with songs such as “(Da Le) Yaleo,” wringing notes and soliciting screaming wails from the neck of his guitar, in his sonically signature style.

The setlist was a mix of vintage and modern-day Santana. The latter brought classics such as “Evil Ways,” “Black Magic Woman/Gypsy Queen,” and a rendition of Tito Puente’s “Oye Como Va” - whose decaying sustain was uprooted by One Big Power Chord that changed up the momentum, and moved it all into the modern day.

A handful of tunes revisited from his monster 1999 album ‘Supernatural,’ included “Smooth,” the sultry undulations of “Maria Maria,” and an emotionally stirring performance of “Put Your Lights On,” during which thousands engaged their smart phone electro-lights, illuminating the amphitheater in a surreal glow. There were also musical snippets, or entire renditions of tunes in tribute to other artists such as Miles Davis, John Coltrane, The Chambers Brothers and Olatunji.

At his best, Carlos led the ensemble in a series of cadences that alternately beat with rhythmic intensity or pulsed in a seductive flow, ultimately culminating in the manic boogie jump-jump of his song “Foo Foo,” before bringing it back full circle with The Youngbloods’ inspired encore “Get Together.” The Doobie Brothers performed earlier in the evening.

Photos of Slipknot on stage at Saratoga Performing Arts Center on Wednesday, Aug. 21 at Knotfest Roadshow 2019.