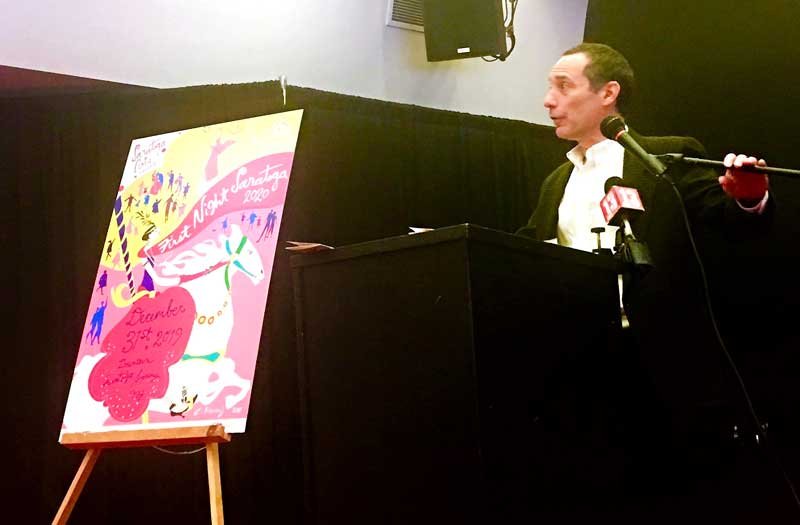 There will be variety: live music – from symphonic to rock ‘n’ roll, dancing, theater, and comedy and skateboard demos will be among this year’s offerings.

Billed as “First Night Saratoga 2020: A New Dimension,” the goal is to entertain and to inspire, while offering interactive possibilities for thousands of revelers of all ages. The Dec. 31 event will mark the 24th First Night gathering in Saratoga Springs and the 10th such event since it was taken on by Saratoga Arts.

“We’re not just presenters of the arts, we encourage everyone to be engaged and to find the art within themselves.” - Joel Reed, executive director of Saratoga Arts, said Tuesday, unveiling this year’s event poster. First Night programmer Bobby Carlton stressed the desire to create an interactivity between performers and the public played a major role in organizing the Dec. 31 event, and to that point encouraged dialogue between festival attendees and performers when not on stage. There will also be a variety of dance events in which revelers can take part held in different locations.

The New Year’s Eve event will feature about 70 acts in more than 30 venues - about 230 sets over six hours - as well as a 5K road race which will kick off the night. New this year is an interactive “Digital Midnight” event that will replace the annual fireworks show. The audio-visual presentation will broadcast online and enable revelers to “enjoy midnight anywhere.”

Typically, more than 10,000 people ring in the New Year with Saratoga Arts and First Night Saratoga in downtown Saratoga Springs.

Admission, by way of a special First Night Saratoga button – is $20. That cost is $15 if purchased online or at Saratoga Arts, located on Broadway, through Dec. 25. Free CDTA bus service will be available downtown. Children 12 and under are admitted to events free of charge. For more information, go to: www.saratoga-arts.org/first-night. For a more detailed list of performers and venues, please see next week’s edition of Saratoga TODAY.

Saratoga Arts Seeks Volunteers for First Night Saratoga 2020
First Night Saratoga would not be possible without the help of over 250 volunteers. Last year, volunteers assisted in overseeing 30 performance venues, answering questions, and ensuring that over 10,000 revelers rang in the New Year in a fun and safe manner. Volunteers are required to attend a one-hour training session on one evening in December. All volunteers receive a free First Night Saratoga admission button, and a First Night poster. Area Managers and Site Captains also receive a complimentary membership to Saratoga Arts. Get the jump early this year, especially if you have a favorite venue in which you would like to be placed. If you have questions, please contact Mary Henninger, First Night Volunteer Coordinator, 518-584-4132, ext. 208 or email: This email address is being protected from spambots. You need JavaScript enabled to view it.

Registration Open for First Night Saratoga 5K Run
The Saratoga Arts' First Night 5k - a family friendly event - begins at the Skidmore College gymnasium at 5:30 p.m. on Dec. 31 and traces a 3.1 mile loop around the campus. This is a moderately challenging course, including both hills and downgrades. Registration is $30 through Dec. 25. To register, visit www.saratoga-arts.org/first-night/first-night-5k.