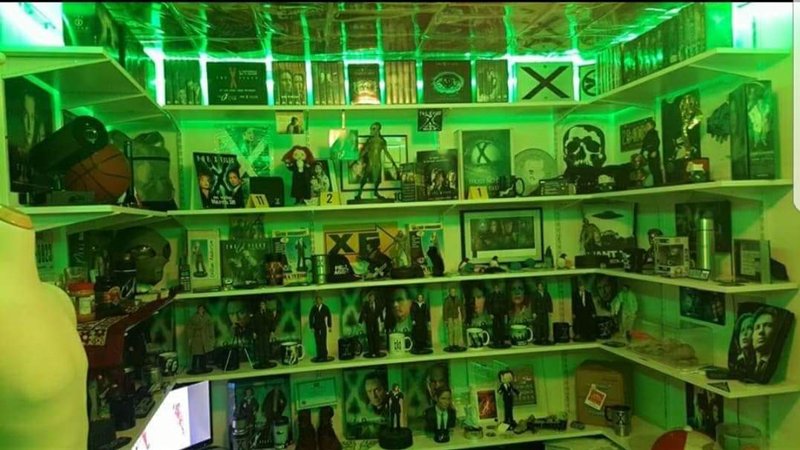 Part of the Collection. Photo provided.

Jim Thornton glanced across his living space filled with a variety of office furniture first seen on TV. There are side-desks and tables. There is an alien cryo-pod chamber that climbs six-feet high. “It’s all in our house,” said the man behind an extensive collection of X-Files props, memorabilia, and commercial pieces. “We have no room.”

When asked what initially drew him to the show, Thornton’s response was simple: “It was a creepy show. I’m a horror fan.” But it’s evidently clear how deep this rings true when he lifts up his paint-covered t-shirt to reveal an arm full of horror movie inspired tattoos.

His collection of X-Files goods began in stages, going from commercial, mass-produced items like trading cards, to promotional pieces and then to gifts crew members received. His first official prop was a camera battery.

“When I got a binder of trading cards, it felt like I owned part of the show,” he says. “From there, I just had to have more. The battery, it was the same feeling — but a little different. It felt more like the real deal, like this was touched by an actor, by a camera guy.”

It’s safe to say Thornton, and his wife Kelly Anthony, have moved far beyond a single camera battery. In fact, most of their house is dominated by the props. This includes an alien cryo-pod chamber from the Fight the Future film, which is about six and a half feet tall, four and a half feet wide. He also owns a good handful of office furniture from the show, like side desks and tables.

This past year the couple rented a moving truck, piled much of their collection in, and drove to Chicago for X-Fest, an X-Files convention. Once they arrived and set up, fans were blown away — and so were the stars. It was here that people encouraged the couple to open a museum.

Since then, Karen Connavol, who acted in a few episodes, has contributed to the couple’s museum fund-raiser. Frank Spotnitz, an executive producer, made a donation of his own personal merchandise. And on Feb. 27, TMZ mentioned that a Saratoga couple is looking for a museum and that they caught up with David Duchovny who gave his blessings.

And now, Thornton feels a sort of responsibility to put this into motion. Although, he does hesitate to use the term “museum,” for its connotations of stuffy, classical art that visitors look at but don’t interact with.

The plan is to bring back what Thornton refers to as “old-school stuff.” He wants to have Windows 95 computers available for visitors to play X-Files computer games, and have original PS1 games as well. Everywhere in the room, of course, will be televisions screening episodes.

As of right now, they are looking for a space in Saratoga. Despite finding the rent to be extremely high, they are adamant to stay in this area because “One, it’s Saratoga. You have the track, you have SPAC, you have the tourists.”

The point for the museum — and the reason why Thornton and Anthony find it so important — is so “[The fans] have a space where they can all get together and enjoy the show they all love. They’re going to see props from their favorite episodes that everyone thought would be gone.”

If any readers have leads on available spaces for Kelly and Jim’s collection, the couple urges you to contact them at Twitter, Facebook, and/or  This email address is being protected from spambots. You need JavaScript enabled to view it..