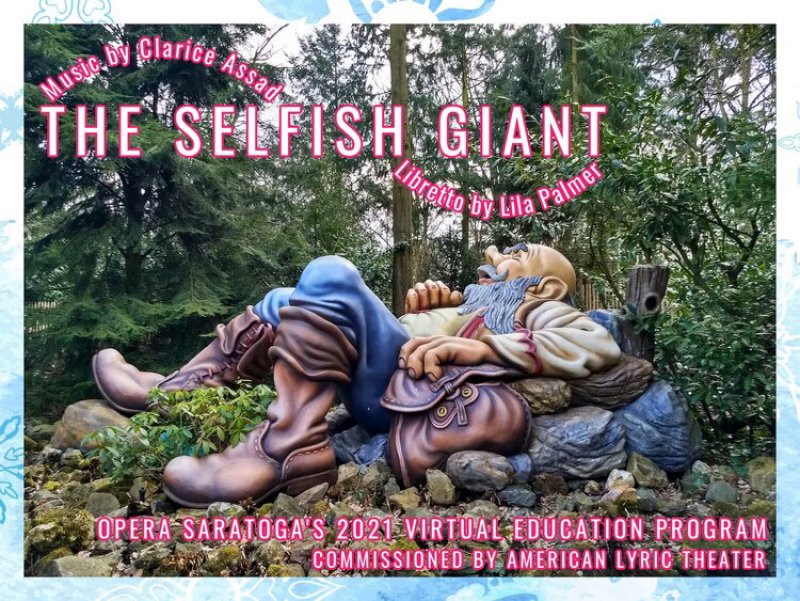 SARATOGA SPRINGS — Opera Saratoga announced last week that the company has converted its popular in-school OPERA-TO-GO tour into an interactive, virtual program this year to ensure safety for all while continuing to provide a unique and enriching arts education experience.

The new program will feature the digital world premiere of The Selfish Giant, a new one-act opera based on the short story by Oscar Wilde, written by Brazilian-American composer Clarice Assad and librettist Lila Palmer, commissioned by American Lyric Theater in New York City specifically for young audiences.

“While we love visiting schools and introducing children to opera, proceeding with an in-person tour this winter and spring would not only be impractical, but also irresponsible. Safety must come first. However, we are still committed to providing access to the performing arts to students as well as robust arts education resources to educators – whether they are teaching virtually, in person, or in some combination of the two,” company artistic and general director Lawrence Edelson said in statement.

Over the past six months, Opera Saratoga has re-envisioned the OPERA-TO-GO program as a digital initiative that will be available for free to educators for their students.  The program will be available to schools in late February, and is comprised of the following elements:

• Opera Saratoga is creating a series of short video lessons on opera, aligned to New York State Common Core Standards in Music, Theater, Visual Arts, and English/Literature at grade levels from K-5, as well as the National Social Emotional Learning Standards. For each grade level, there will be a series of 6 videos, each 10 to 15 minutes in length, available for use in class, or for at-home viewing. Each video is accompanied by a comprehensive teacher’s guide that includes details of the alignment to State standards, and grade appropriate follow-up activities for students.

• Opera Saratoga is making a professional audio recording of the new opera THE SELFISH GIANT, by composer Clarice Assad and librettist Lila Palmer, based on the short story by Oscar Wilde. This recording will be fully integrated into the digital curriculum, providing opportunities to explore subjects including adaptation (how a short story becomes an opera), the role of the librettist, the role of the composer, collaboration, how words and music come together to create sung theater, the textual and musical “building blocks” of opera, and how opera is produced on stage.

• Using the recording, students will have the opportunity to make their own film versions of THE SELFISH GIANT by creating art that reflects the story and music. A scene-by-scene breakdown of the dramatic action of THE SELFISH GIANT will be provided to each class participating in the program, along with very clear, grade appropriate instructions. Students will be assigned specific moments of the opera to illustrate in a manner appropriate to their age/grade level, through drawing, painting, collage, or digital photography. Opera Saratoga will then create films of THE SELFISH GIANT, synching the recording of the opera to the art created by the students that bring each scene to life. Each school or class will have the opportunity to create their own versions of the film. In the spring, these videos will be completed and made available to share with family members as well as on each school’s website and social media channels. Opera Saratoga will also create an online library of student-created films of the opera, which will be hosted on the company’s website.

Educators interested in offering this program to their students in Kindergarten through Grade 5 should register at www.operasaratoga.org/virtual-education no later than Jan. 22.

Opera Saratoga is able to provide free access to the entire video lesson series with educational support materials for all teachers and all schools. However, as the company does have limited capacity to create the opera-video projects, this portion of the program will be limited to schools in Saratoga, Warren, Washington, Essex, Albany, Rensselaer, and Schenectady counties, and will be limited to the first 50 schools or classes that register for the program.

Opera Saratoga, formerly known as Lake George Opera, began with a production of Die Fledermaus at the Diamond Point Theatre on July 5, 1962, playing to an audience of 230. The Company now calls Saratoga Springs home and performs for more than 25,000 people annually. Opera Saratoga celebrates its 60th Anniversary this season. For more information, visit www.operasaratoga.org