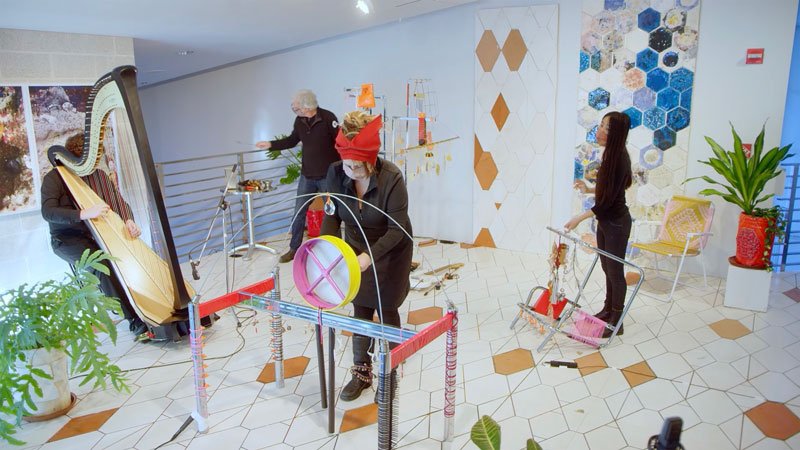 Still of a performance by Silver the Void with sound sculptures by Susan Jennings in Nicole Cherubini: Shaking the Trees, Jan. 7, 2021, Tang Teaching Museum at Skidmore College.

SARATOGA SPRINGS —
The Frances Young Tang Teaching Museum and Art Gallery at Skidmore College invites the public to experience a double feature of exclusive videos starting this week on the Tang website at tang.skidmore.edu.

In an online version of the Tang screening series, Whole Grain: Experiments in Film and Video, the Museum presents a limited-access presentation of Eve Fowler’s With It Which It As It If It Is To Be, Part II (2019) in conjunction with the exhibition Never Done: 100 Years of Women in Politics and Beyond.

Fowler’s video is the second installment in her planned ten-part video series that explores the working practices of women artists in their later years of their career, in their studios, and interacting with their art. In this collaborative work, Fowler visits the studios of women artists in New York City and Los Angeles. The soundtrack consists of different artists and writers reading Gertrude Stein’s 1910 story Many Many Women. The repetitive stream of consciousness oration is hypnotic and provocative in its consideration of the lives and works of these prolific artists. The video will be available for streaming on the Tang website through Feb. 7 at tang.skidmore.edu.

Also this week, the Tang will release a special recording of a commissioned performance by Silver the Void in the installation Nicole Cherubini: Shaking the Trees - an improvisational music/art project of artist Susan Jennings, who makes sculptures and plays those sculptures with her husband and daughter. Watch the video on the Shaking the Trees exhibition page.

This double feature is part of the Tang’s ongoing commitment to supporting artists and to bringing engaging experiences to its audiences, even as the Museum building remains closed to the public at least through the end of the spring semester.

Access to the online videos is free and open to the public.

The museum has also announced the release of a new publication - Culture as Catalyst – focused on the most urgent issues of the day. The book is a collection of compelling dialogues and new writings by artists, scholars, activists, and influential thinkers who present new perspectives that disrupt the status quo by encouraging a “getting comfortable with discomfort” attitude to work through big ideas to drive change.

Edited by Isolde Brielmaier, the first Curator at Large at the Tang Teaching Museum, Culture as Catalyst accompanies the 2017–2019 Accelerator Series of public conversations she organized at the Museum to shed new light on the topics of whiteness, migration, mass incarceration, feminism, monuments, citizenship, cultural appropriation, forgiveness, and food justice. These dialogues were part of a three-year project called Accelerate: Access & Inclusion at The Tang Teaching Museum, which was supported in part by The Andrew W. Mellon Foundation.

Culture as Catalyst (276 pages; $30) is edited by Isolde Brielmaier, designed by Beverly Joel / pulp, ink., and includes an introduction by Brielmaier and a welcome by Ian Berry, Dayton Director of the Tang Teaching Museum. It is now available from the Tang website at tang.skidmore.edu/shop.

Every other Thursday through May 27, the Tang Teaching Museum will launch a video trailer on social media for each chapter of the book and make that chapter available as a downloadable PDF on the Museum’s website at tang.skidmore.edu.