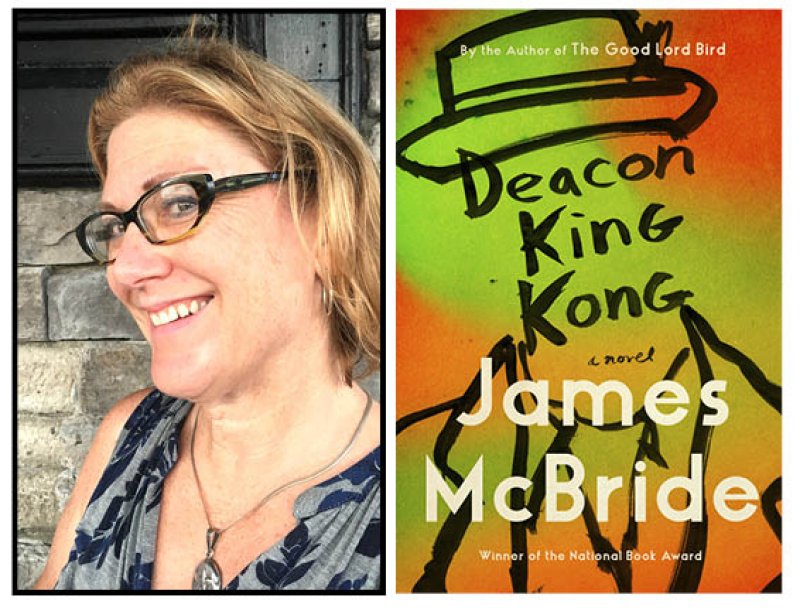 SARATOGA SPRINGS —James McBride’s most recent novel, Deacon King Kong, is a poignant and clever portrayal of 1960’s Red Hook Brooklyn. Saratogians with family ties to the city will find the setting and characters familiar and if not highly entertaining.

The novel begins with the  shooting of 19-year-old, up and coming heroin dealer, Deems Clemens by the 71-year-old affable, drunk handyman/church deacon Cuffy Lambkin a.k.a. Sportcoat. This single act ignites the community that is the Causeway Housing Projects with unpredictable results. More than a solitary act of violence in a tough neighborhood, this shooting, and its aftermath, tells the story of a neighborhood, a way of life and the power of collective struggles and heartache with humor
and pathos.

Our shooter – Sportcoat - is fumbling through life as he is being pursued by the local police for the shooting for which he has no memory.  He is aided kindly by his friend, Hot Sausagewho provides him with homemade hooch he calls King Kong.   Sportcoat’s community includes his fellow project residents, his Five Ends Baptist Church members and clergy, his blind 20-year-old son Pudgy Fingers, and his deceased wife Hattie who mystically appears to him every day mostly to nag him from the great beyond.

Through great charm and irony, McBride intertwines competing drug gangs, Italian mobsters, devoted church members, sympathetic police and a handful of romances to produce a tale of morality in which the reader is not always sure of where the greater good lies. Throw in the government free cheese program of the time, some missing Christmas club church funds, a hidden religious relic and you have quite a story. This book is perfect fodder for endless conversations of right and wrong, struggle and practicality and personal and societal responsibility.

“I had the great pleasure of hearing James McBride speak at our own Northshire Bookstore this past March to discuss Deacon King Kong. It was the last public event I attended prior to shelter in place and am awfully glad he made it under the wire.  (Mr. McBride was way ahead of social distancing when he preemptively apologized for not shaking hands and instead waived to all attendees. He confessed that a downside of celebrity was the general public’s desire to always shake your hand.) Mr. McBride discussed his conveying of history through fiction as a preferable and more illuminating way to bring realities of a people and a place to life.  This was clearly evident in his 2013 pre-civil war John Brown novel “Good Lord Bird” for which he won The National Book Award for Fiction.  To fully appreciate the unique prism through which author McBride views the world, I would urge readers to get his nonfiction biographical “The Color of Water” which takes us through his Brooklyn upbringing with a white, orthodox Jewish mom, a Black pastor father and numerous siblings.

Through the foibles of each of his characters, James McBride brings us back to Brooklyn in the 60’s with the influx of the heroin trade, poverty, racism, neighborhood segregation all with relevance to today’s world.  His characters’ complexities nuance immoral acts in moral people, kind acts in seemingly immoral people and love of an individual versus bias of a group.  The themes of friendship through familiarity, acceptance and spiritual presence are throughout this wonderful read.

If you want to be able to produce a smile on demand, read this book and keep its characters ever ready in your memory bank.”

Elise Gotimer is a Saratoga resident and avid reader. She is a mother of three grown children and a practicing attorney in the social service field. She may be reach at This email address is being protected from spambots. You need JavaScript enabled to view it.