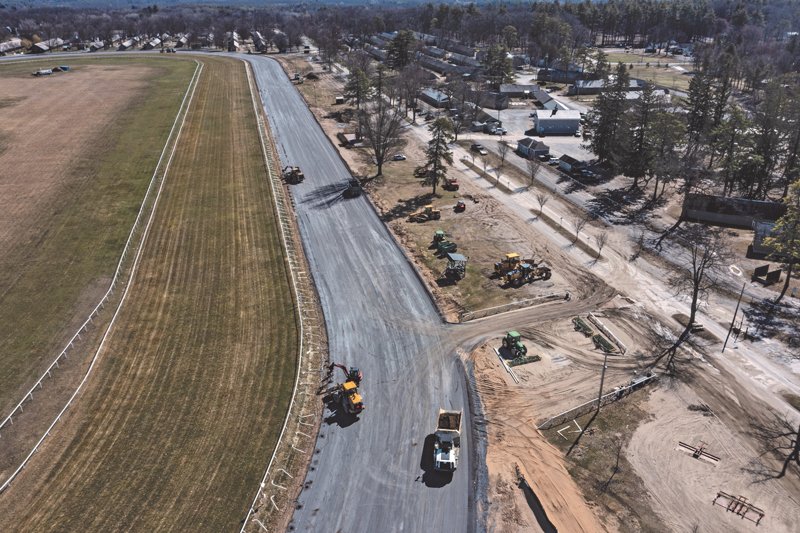 The Oklahoma Training Track, depicted in this overhead shot on March 30, 2021, is undergoing a $1 million upgrade. Photo: SuperSource Media.

SARATOGA SPRINGS — The work continues at the Oklahoma Training Track where an approximate-$1 million project is underway.

The New York Racing Association received approval from the New York State Franchise Oversight Board in January to proceed with improvements of the training track in advance of the anticipated 2021 racing season.

The upgrades will include a new base, improved drainage, a width expansion of the track where possible, and a plan for new safety railings – which specifically accounts for about $350,000 of that estimated $1 million cost.

Members of the Franchise Oversight Board said in January they were working with Saratoga preservationists related to the width expansion of the track, as the project will likely impact existing pine trees that were planted alongside the track in the mid-1980s. The training track has not had any significant renovation in 40 years.

The Oklahoma Training Track signals the start of “spring training,” in advance of the summer racing meet at the main track located across the street at Union Avenue. It typically opens in April, although in the pandemic-affected year of 2020, a delayed opening pushed the opening to the first week of June. Last year’s summer meet was held without fans in attendance.

More in this category: « Skidmore College Ice Hockey: Back on the Ice Ageless Dancer, Ballet Barre & Balance Series at Dance Museum »
back to top