A Lifetime in Pictures: Spa City has Played a Role in a Number of Films 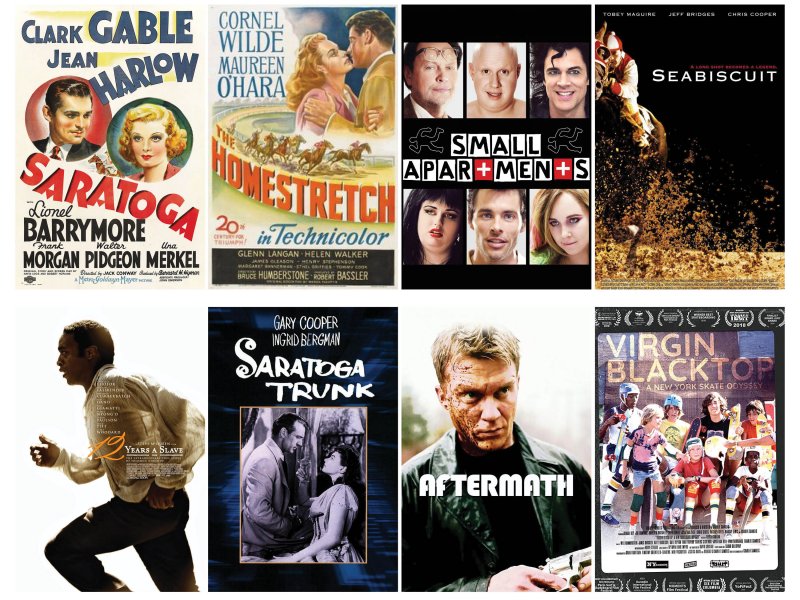 SARATOGA SPRINGS —Film crews set up a series of shooting locations in the Spa City the past week - Railroad Place and Caroline Street among them - where segments for an independent movie titled “Paint” are being captured.

The film – directed by wBrit McAdams – features Owen Wilson, Michaela Watkins, Wendi McLendon-Covey, Ciara Renée, Lusia Strus, and Stephen Root. The script centers on “Carl Nagle” – a fictional character whom, in visual context anyway appears not unlike the late Bob Ross – best known as the host of the instructional PBS TV program in the 1980s and ‘90s, The Joy of Painting.

While not the most common occurrence, the Spa City has performed a number of times as a setting for the film industry.

“Saratoga” filmed in part at Saratoga Race Course, stars Clark Gable, Lionel Barrymore, and Jean Harlow – the latter in her final film. Harlow collapsed on set during the making of the film, and her unfinished scenes were completed by using a stand-in actress. A few years later, the racecourse made another appearance with the 1947 film “The Homestretch.”  Here, a Boston socialite – portrayed by Maureen O’Hara, navigates across a landscape of various American racetracks and through one rocky marriage. The racecourse also was featured in the 1979 made-for-television drama film “My Old Man,” starring Kristy McNichol.

Perhaps the most prominent appearance of the racecourse, at least in the modern day, was in the adaptation of Laura Hillenbrand’s nonfiction bestseller, “Seabiscuit: An American Legend.”  During a week-long shoot following the conclusion of the 2002 summer meet, a crew of more than 200 people settled into the Saratoga region transforming the racecourse into a circa-1920s and ‘30s setting. When the film was released the following year, locals scanned the silver screen for their own faces as film extras alongside actors such as Tobey Maguire and Jeff Bridges.

A number of Victorian-era homes on and around North Broadway provided the setting for the 1981 film “Ghost Story,” that showcased performances by John Houseman, Douglas Fairbanks Jr. and Fred Astaire, and multiple scenes across the Saratoga County region were used alongside additional settings in Montana and California in the 1998 movie “The Horse Whisperer.” Robert Redford directed and starred in the film, which garnered praise and attention for a 13-year-old relatively unknown Scarlett Johansson, portraying a teenager traumatized by a riding accident.

In the fall of 1990, 3,000 area hopefuls tried out as extras for the filming of “Billy Bathgate.” Approximately one-third were chosen for the three-week shoot at Saratoga Race Course, the Hall of Springs and at the Gideon Putnam Hotel. Film fans snooped around the region for the film’s stars Dustin Hoffman, Bruce Willis, Nicole Kidman and then-boyfriend Tom Cruise. Kidman was filmed dancing in the Hall of Springs in the Saratoga Spa State Park.

Historically incorporating portions of the Saratoga story is “12 Years a Slave” (the Solomon Northup story) – released in 2013, and “Saratoga Trunk,” released in 1945 with Gary Cooper and Ingrid Bergman.

In 2005, the city provided a setting for the films  “Aftermath” - which featured Anthony Michael Hall, Tony Danza and Chris Penn - and the dramatic thriller “The Skeptic” -  with a cast that included Tom Arnold and Tim Daly.

Some of the rest: “Virgin Alexander” – a 2011 comedy depicts a young man who attempts to stave off eviction turns his Saratoga house into a brothel, and “Isabelle,” is a horror-filled 2018 film that showcases the life of Matt and Larissa, a young couple who move into their dream home in Saratoga Springs.