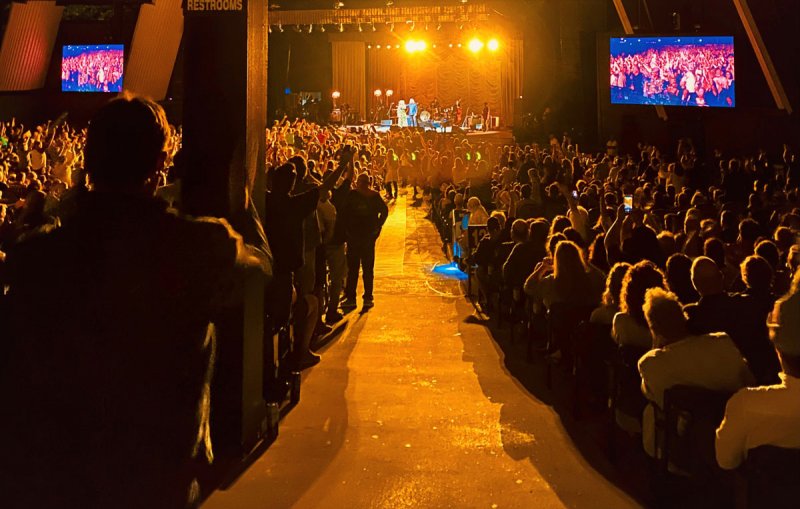 Robert Plant and Alison Krauss on stage at SPAC June 3, 2022, shining the white lights and turning everything to gold. Photo by Thomas Dimopoulos.

They performed 20 songs, the majority culled from the duo’s two albums together – 2007’s “Raising Sand,” and the more recently issued “Raise The Roof,” which dropped in the age of the pandemic sequester. This year’s stagings presented the first opportunity to perform the songs in front of a live audience.

“It’s a big deal for us. We’re very thrilled to be back on the circuit and thrilled to be in this great room that has seen so many magnificent people…like The Dead!” Plant announced from the stage, eliciting a roar of approval from the crowd, a smattering of whom wore T-shirts emblazoned with Led Zeppelin’s Swan Song décor.

More than a half-century has rambled on since Robert Plant first performed in the region. Back then, it was a newly formed Led Zeppelin that played the Aerodrome nightclub on State Street in Schenectady on an August night in 1969 - two days after Jimi Hendrix had famously wrung the notes of the Star-Spangled Banner from his guitar atop the Woodstock Festival stage.

Plant and Krauss came onstage at SPAC with little advance fanfare and arrived from different entry points. Krauss dressed in florals and entered from stage right; Plant from stage left, an oversized shirt draped over his pleatherette trousers.  A backlit swatch of classy draperies, swooping and beveled in looping arcs illuminated like an ever-changing mood ring, conditioning the atmosphere with an art deco hue.

In addition to their own collaborative songbook, the duo performed a trio of Everly Brothers tunes, and an assortment of rhythm & blues odes to Little Milton and Allen Toussaint, Plant cultivating the roots of his bluesy garden, Krauss providing sympatico vocals and displaying her fiddling talents as reigning bluegrass queen.

They also dipped into the Led Zeppelin songbook. “The Battle of Evermore” fit perfectly into the ensemble’s overall presentation, and a tastefully ominous “When The Levve Breaks” (covering Led Zeppelin who covered the chilling 1920s song), had Plant throttling maracas and Krauss unsheathing her bow across the strings of her fiddle.

“I got a few moves from Elvis and one or two from Sonny Boy Williamson and Howlin’ Wolf and threw them together,” he once laughingly explained his stage moves to the New York Times’ Neil Strauss.

In some ways the event was not dissimilar to Bruce Springsteen’s showcase at the same venue, when Springsteen came to town during the Seeger Sessions Band Tour: well-known tunes offered up for a different way of hearing.

McPherson performed double duty, delivering a lean and clean set of twang-a-billy as the night’s opening act, which included a stripped-raw rendition of Iggy Pop’s “Lust For Life” that reminded you how just much fun that song is when distanced from the overplay of commercial TV, as well as just how weird Iggy’s lyrics can be.

On a night that largely celebrated the music of 20th Century Middle America, there existed also a memorable nod to the nostalgia that was Robert Plant’s earlier offerings, particularly in those moments when his voice climbed to the aspirations of classic upper-register screams. Ringing familiar bells, the crowd loved it.