Banned Books: A Special Night of Readings and Music at Caffe Lena Aug. 24. 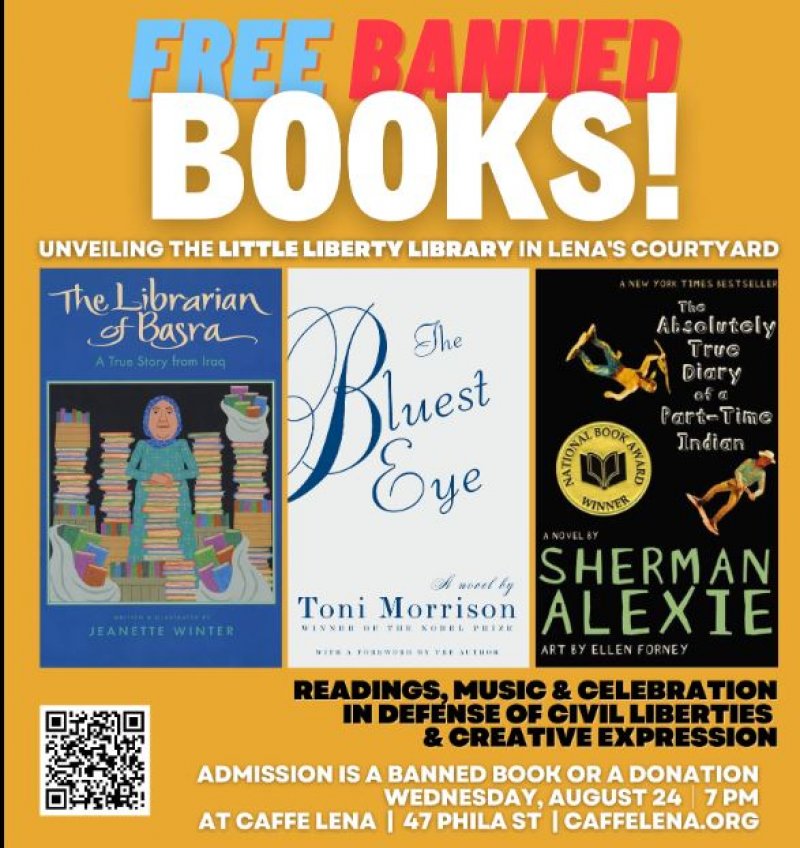 Donate a book, get in free. A night of readings and music at Caffe Lena Wednesday.

SARATOGA SPRINGS — James Joyce to Henry Miller. Hemingway and Huxley to Vonnegut are some among the many who have seen their written words challenged by the powers-that-tried-to-be, or in some cases outright banned for a spell.

“Most of the trouble in this world has been caused by folks who can’t mind their own business, because they have no business of their own to mind,” wrote William Burroughs, whose own writings in his book “Naked Lunch” was banned in several American cities and resulted in an obscenity trial.

The event introduces a Little Liberty Library designed exclusively to circulate banned books, which will be housed in Caffe Lena’s courtyard. The event features excerpt readings from banned books. Barbara Lombardo will serve as emcee.

The aim of the library and the evening program is to recognize the value of all literature, increase public awareness of the censorship occurring today, and encourage action to preserve access to so-called controversial books.

The American Library Association (ALA) is the oldest and largest library association in the world. The organization’s list of frequently challenged books includes: The Catcher in the Rye, by JD Salinger; The Grapes of Wrath, by John Steinbeck; To Kill a Mockingbird, by Harper Lee; The Color Purple, by Alice Walker; Ulysses, by James Joyce; Beloved, by Toni Morrison; The Lord of the Flies, by William Golding; Of Mice and Men, by John Steinbeck.

Attempts to dictate what people may or may not read, however, have greatly been a failed exercise.

When Burroughs’ pal Allen Ginsberg published “Howl and Other Poems,” attempts by authorities to “suppress the beating pulse of a generation,” Allison McNearney writes in a Daily Beast piece published earlier this year, “instead ended up giving it and the entire countercultural movement it helped spawn a totem and rallying cry.”

Admission to the Caffe Lena event is free and reservations are not required; donations of a banned book or a monetary donation to be used for buying banned books for the library are encouraged.