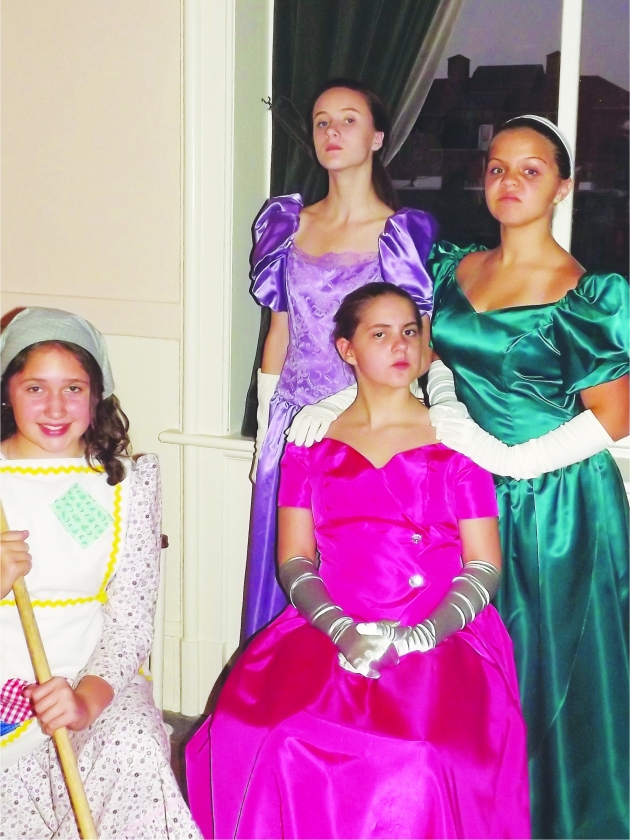 Saratoga Children’s Theatre Proves It Once Again with Cinderella G2K

SARATOGA SPRINGS — Beauty is valued in cultures throughout the world, yet graciousness is a truly priceless commodity. When Cinderella triumphs by fitting into her glass slipper, she reaches a rarified and legendary perch by forgiving her evil stepsisters. That is the common moral lesson among the thousands of versions of the beloved fairy tale which stretch across all continents and well back into the 1600s.

Over 30 local children will be providing their rendition of these versions as Saratoga Children’s Theatre (SCT) presents Cinderella G2K at the Saratoga Music Hall on the Third Floor of City Hall, 474 Broadway, Saratoga Springs. Performances are on Friday, October 25 at 7 p.m. and Saturday, October 26 at 2 and 7 p.m. Tickets are $10 for adults, $5 for children and are available at the door.

Cinderella G2K is directed by Tony Rivera, with music direction by Maria Laurenzo and choreography by Rosie Spring.

The G2K refers to the “Getting to Know” Series, which are uniquely adapted musicals specifically for youth performers. In this specially created version, all the beloved songs and familiar characters are present and accounted for. However, the entire script has been condensed to better suit young attention spans and the plot is slightly altered to highlight a few important lessons.

The cast is, as is the case with all SCT offerings, uniformly excellent and precocious, and given the cast’s young average age, surprisingly accomplished.

A good example is Spencer Boyce, 9, who plays both a white horse and a townsperson. When asked if this was his first time on stage, he replied that “actually, I brought along my resume,” which he preceded to fish out of his pocket and unfold with great theatrical flourish.

In addition to nine previous SCT roles as diverse as a genie in Aladdin to a rooster in Annie, Spencer also has made a mark in singing in several talent shows, offering his takes on tunes by Michael Jackson, Elvis and Dean Martin (“You’re nobody till somebody loves you” is a particular favorite). Spencer is most excited about his next SCT role, where he will play young Marley in A Christmas Carol.

He is also a long-time supporter of big brother Matthew, 14, who is cast as the Prince. Unfortunately, the Prince’s royal duties prevented him from attending our sit down, yet Spencer appeared confident that Matthew’s glass slipper dispensing technique would be well-received by the audience.

Cast in the role of slipper recipient is Emory Garber, 11. Emory studied several Cinderella’s for this role, preferring the 1997 remake starring Brandy (with Whitney Houston as the Fairy Godmother) as most inspiring. Such was her dedication to her craft that she graciously consented to see Cinderella on Broadway as well, starring Laura Osnes. This is Emory’s first SCT production, yet the Forts Ferry Elementary sixth grader has already been slotted for their January production of Jungle Book, in which she will play Bagheera.

An old theater expression is that there are no small roles, only small actors. In this case, about 30 small actors are all playing a large role in making Cinderella G2K a SCT production that everyone in the family can enjoy.