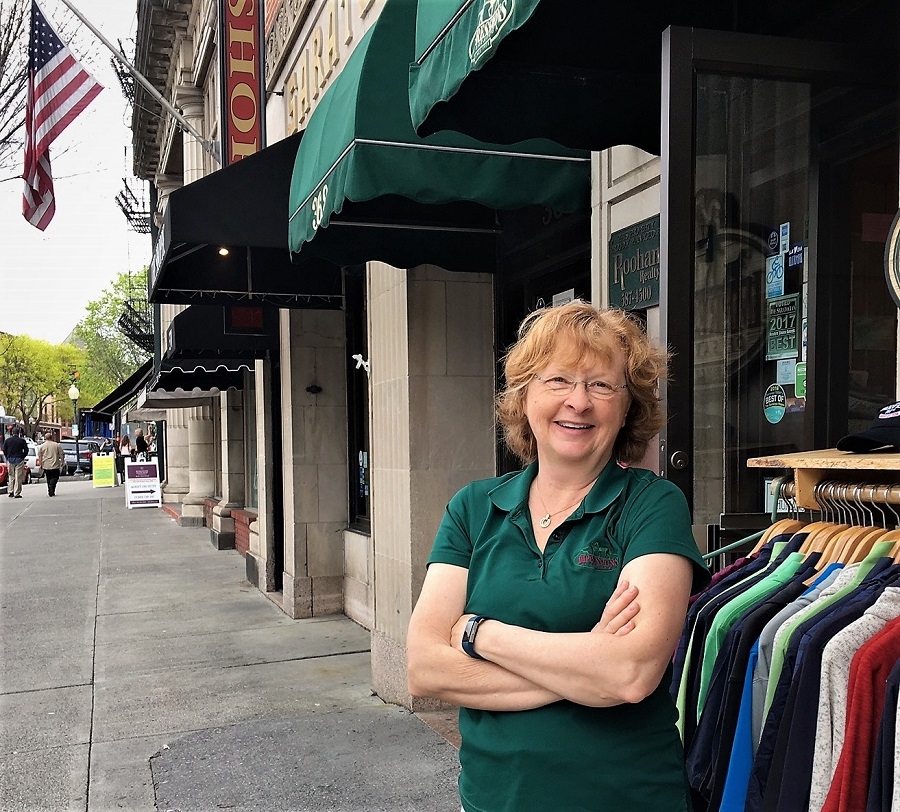 Where: Impressions of Saratoga, Broadway.

Q. When did you first come to Saratoga Springs.

Q. What’s the biggest change you’ve seen in the city in that time?

A. It’s gotten so much busier.

Q. What’s the biggest challenge the city faces in the future?

A. Managing the growth and maintaining the character of downtown, its independent nature. The growth is great, it’s a sign of progress, but it also changes the dynamic.  So, maintaining a balance.

Q. What are you doing today?

Q. What did you want to be when you were a kid?

A. A veterinarian. I was going to be a large animal vet. I was on my way to do that when I met Dave, my husband. He started a screen printing company and I said: well I’ll help him for a couple of years then go back to school. I deferred my acceptance to Cornell, and here I am, without a single regret. I love this.

Q. Do you have animals?

A. I’ve always had dogs, kitties, horses on and off. We have a mini-horse here, he’s a mascot for the store. His name is Upset, named for the horse that beat Man o’War.

Q. What brush have you had with fame?

A. I was lucky enough three years ago to be invited by Congressman Tonko to go to the State of The Union address. So, I did that. There was President Obama, and Michelle Obama was sitting with one of the guys from “Duck Dynasty.” That was pretty cool. Just sitting in this crowd of people and thinking of all the historical things that happened in that room was amazing.  I still get chills thinking about it.

A. Garth Brooks. It was a fantastic show, country music fan or not. And Tina Turner has to take the cake at SPAC. That’s my favorite.