SARATOGA SPRINGS – Brad Paisley stood atop the stage surrounded by hundreds of local high school seniors and asked for the details of their school mascot.

“Blue Streak? What is a Blue Streak?” he pondered. “You guys are a streak of lightning,” he said, finally. “That’s very cool!”

And so it went Wednesday night at the Saratoga Performing Arts Center, where Paisley put the finishing touches on the stage show for his Weekend Warrior World Tour which officially debuted Thursday night at SPAC and will travel across North America and touch down in Norway and Sweden before concluding in late September.

Wednesday night’s “dress rehearsal” came with the issuance of an invitation to hundreds of high school seniors at Saratoga Springs and Averill Park. Many were thrilled to attend the free preview.

“Oh. My. God. I’m so excited. Me and my dad listen to him all the time, but this is my first time seeing him,” gushed Saratoga Springs High School senior Cheyanne Mattison, who alongside fellow classmates Marisa Pantoja, Larissa Benton and Alyssa Concho secured elbow space at the front of the stage on a May night that boasted temperatures near 90 degrees.

The West Virginia born singer-songwriter strolled the catwalk, took selfies, and showcased his guitar skills, mixing strains of Prince’s “Purple Rain” and the Rolling Stones’ “Honky Tonk Women” into a slew of tunes for more than one hour, as the band tweaked its sound and technicians tested the pulsating lights and flashy screen graphics, all to the joy of the kids who gathered to witness the event.

“I’ve never been to anything like this,” Paisley explained, casually dressed in black jeans, a T-shirt, street sneakers. A baseball cap rested atop his head.

The musical presentation was combined with casual back-and-forth banter with students which effectively gave the large amphitheater the feel of an intimate living room. When informed that the Blue Streaks had just secured a Section II title in tennis, Paisley offered his congratulations alongside some advice.

“It’s great you won. Tennis is good, but make sure you guys get a back-up career,” he instructed, before sharing his thoughts with the assembly of 17 and 18-year-olds of something to look forward to.

“You know, people will tell you high school is the best part of your life. That’s bull-crap. It’s not,” Paisley said. “But, now college…” he said with a smile.

Paisley made his musical debut in 1999. He has released nearly one dozen studio albums and topped the country music singles charts numerous times.  His new release, “Love And War,” features appearances by Mick Jagger and John Fogerty, among others. 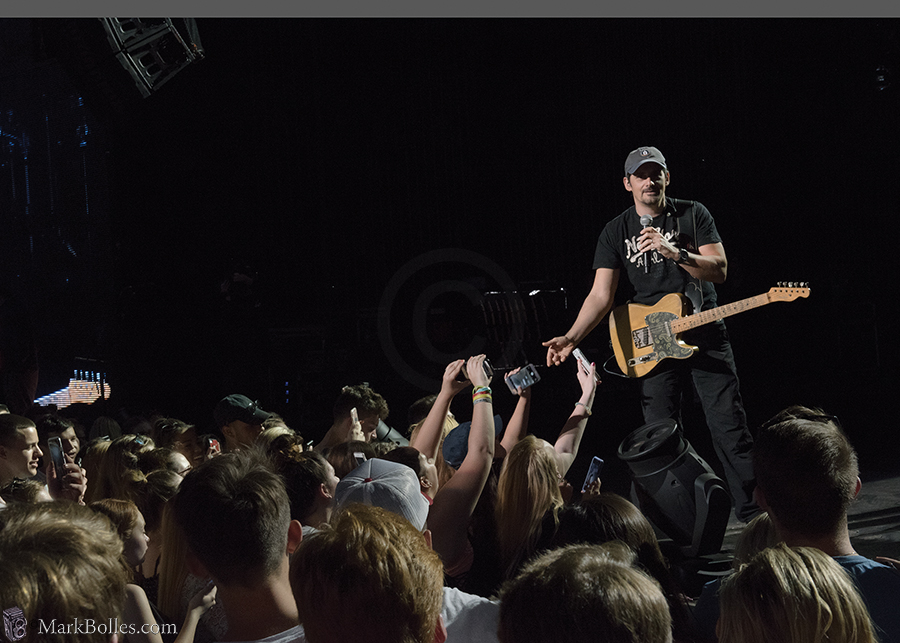 More in this category: « Hale Oprah: Local Artist Hopes Kids’ Book Inspires Audience with Winfrey Neighbors: Snippets of Life From Your Community »
back to top