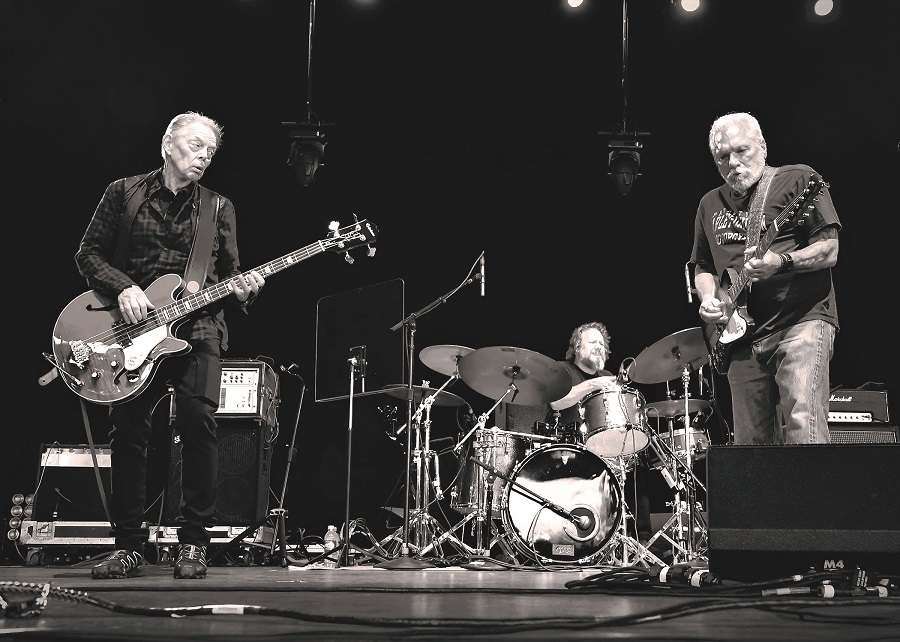 SARATOGA SPRINGS – Jorma Kaukonen stepped into the sunlight and rode an E chord for all it was worth:

“Down in the mine,

circled ‘round the diamond,

Serpent of your expectations,

Electric Hot Tuna – these days a power trio led by longtime bandmates Jorma Kaukonen and Jack Casady, and aided amply by the grounding beats of drummer Justin Gulp, came to Saratoga July 3 and staged a show at the Saratoga Performing Arts Center in support of the Tedeschi Trucks Band, and the Wood Brothers.

It was 49 years, nearly to the day, when Kaukonen and Casady graced the front cover of Life Magazine beneath the headline: “Music That’s Hooked The Whole Vibrating World.”  Perhaps best known for their respective roles in helping create the Jefferson Airplane’s signature sound – try imagining songs like “White Rabbit” sans Casady’s "Bolero" bass, or “Somebody To Love” and “Lather” without Kaukonen’s soaring guitaristry - the Hot Tuna duo has done well in creating their own legacy during the past 45-plus years, alternating between the moody electric wailing of Kaukonen’s wheezing guitar and elaborate acoustic fingerpickings, and Casady’s melody bass. Add to that hipping an entire generation of guitar players to the music of Robert Johnson and Jelly Roll Morton, Jimmy Reed and Rev. Gary Davis.

Much of that legacy was on full display at SPAC, where the band’s set began with a pair of acoustic numbers and took off in earnest when Kaukonen strapped on his electric Firebird that bent through the wave of a Wah-Wah flange and delivered a string-bending swoon of vintage psychedelia, blown in on a breeze from the west coast of America.

The three-piece ensemble allows ample space for each instrument to be well-defined by the human ear, and as Kaukonen displayed a mental fixation on his fretboard delivering his searing notes, Casady plunked, boomed, slid and slapped out the low tones on his Wine Red hollow-body bass, his undulating eyebrows rising and falling with the plonk of the beat.

“The last time I remember that Jack and I were here was in ’89 on the (Jefferson) Airplane reunion tour,” announced Kaukonen, a black Harley T-shirt clinging to his 76-year-old frame. Truth be told, the band had been here with The Further Festival in the late ‘90s and on a bill with the Allman Brothers in 2000, but no one seemed to mind the historical misstep inside the amphitheater and out on the summer lawn where fans of the music swooned and grooved, transported to some heavenly place in a world of song.

More in this category: « Opera Saratoga: "It’s really going to be a historically significant event for Saratoga Springs” Neighbors: Snippets of Life From Your Community »
back to top