SARATOGA SPRINGS – A few months into her tenure at the helm of the Saratoga Performing Arts Center, Elizabeth Sobol explored the venue’s historic stage, the jigsaw pieces of a unique concept formulating in her mind.

“One day I was standing out in the amphitheater and looked up at this massive stage while thinking about this crazy idea,” recalled SPAC’s president and CEO.  “I wondered: How many people can we seat up there? As it turns out, it’s 300.”

Earlier this week, the fruition of that “crazy idea” went on full display when the venue hosted the first of four SPAC On Stage events, which spins the performers’ podium 180 degrees and places audience members at the back of the stage to face the musicians. A panoramic of the setting sun. the great lawn of SPAC and the columned architecture of the Hall of Springs lazily recline in the distance.

The four-part series will be staged consecutive Monday nights in August. The grand experiment kicked off Aug. 7 and by all measures of sound and vision was a major success.

“Tonight, we’re doing this for the first time together, so let’s let our hair down and have a ton of fun,” Sobol announced, the foundation of a rollicking piano punctuated by the brassy horns of The Hot Sardines.

The visuals are splendid, with no seat more than a few meters from the stage, and however it was done, the sound on this night is perfect: each musical intonation easily observed, and the volume boosted at an enjoyable level.

The experience is both intimate and surreal. The lawn and amphitheater, absent of patrons, is eerily quiet, and even the venue’s security detail collectively wear perplexed looks. Audience members are directed to their seats via an ascending staircase at stage left, warmly greeted as if entering a gallant eatery, and are directed to their pre-numbered seats by walking across the historic stage where everyone from Jim Morrison to Mikhail Baryshnikov have strutted their stuff.

The U-shape seating configuration cradles the stage, with a half-dozen or so rows flanking the band podium on either side and a bleacher-type fixture housing seats that climbs at its center.

SPAC on Stage takes place Mondays at 8 p.m. in August. Time for Three will perform Monday, Aug. 14, Black Violin on Aug. 21 (tickets for this show are sold out), and three-time Grammy nominated Afro-Cuban music group Tiempo Libre will conclude the series on Aug. 28.

“When the notion of SPAC on Stage was born, there were bands that I wanted to bring in that I thought would do this so perfectly,” Sobol said. “We’re almost sold out of the whole series and 22 percent of our ticket buyers for this series have never been to SPAC before, so that’s huge. I wanted to introduce a type of music we weren’t really touching on at SPAC and this was the way to do it. You’re bringing the audience out of the amphitheater and onto the stage to be with the artists.” Sobol said audiences can expect the series to be revisited in future seasons.

Time for Three will be showcasing a lot of their new material during their SPAC appearance Aug. 14.

“Inviting the audience on stage to get that close to us is going to be awesome,” said Time for Three founding member Nick Kendall. “I think it plays into the unexpected characteristics of Time for Three. You’ll really get to witness the interplay between the three of us. So much of (our sound) seems like it’s being created in the moment and by being a lot closer you’ll be able to see that interplay that sometimes is missed at a big concert hall or a stadium.

“We have played at SPAC before with the orchestra, so iIt’s going to be really cool to turn that on its head, and bring the audience on stage.”

Time for Three and its three classically trained musicians — violinists Nick Kendall and Charles Yang, and double-bassist Ranaan Meyer defy traditional genre classification. The trio performs music from Bach to Brahms and beyond, playing originals and their own arrangements of everything from bluegrass and folk tunes to mash-ups of hits by the Beatles, Brittany Spears, Kanye West, Katy Perry, and others. The group has performed at venues as diverse as Carnegie Hall, to the ABC TV show “Dancing with the Stars.”

The variety of venues well suits the SPAC on Stage series as well as the ensemble’s performance chops. “It reflects the energy of our band. We love the surprise nature of it. We’re just as comfortable playing on street corners as we are in concert halls,” said Kendall, adding that the group’s three co-creators inspire a fusion of sound that creates a larger symphonic fourth.

“At the root of my desire in music is the appetite to create,” Kendall said. “There’s such a reciprocal energy, especially with my bandmates when we perform; I’ll go out, spark an energy and if the energy comes back – well, that’s what I live for, whether it’s with another musician or with the audience.”

Monday night the energy created in that magical place between audience and band will be given a whole new sea of possibilities in which to flourish. 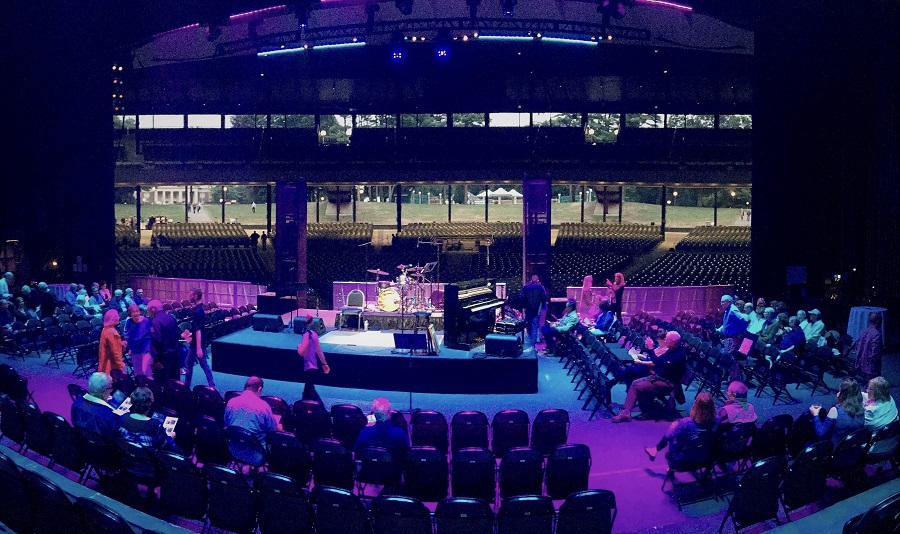 Audience filing in to the U-shaped seating configuration during first of four SPAC on Stage performances Aug. 7, 2017. Photo by Thomas Dimopoulos.

More in this category: « Ramblin Jug Stompers Take It to The Roof on Thursday Neighbors: Local Marine To The Rescue »
back to top