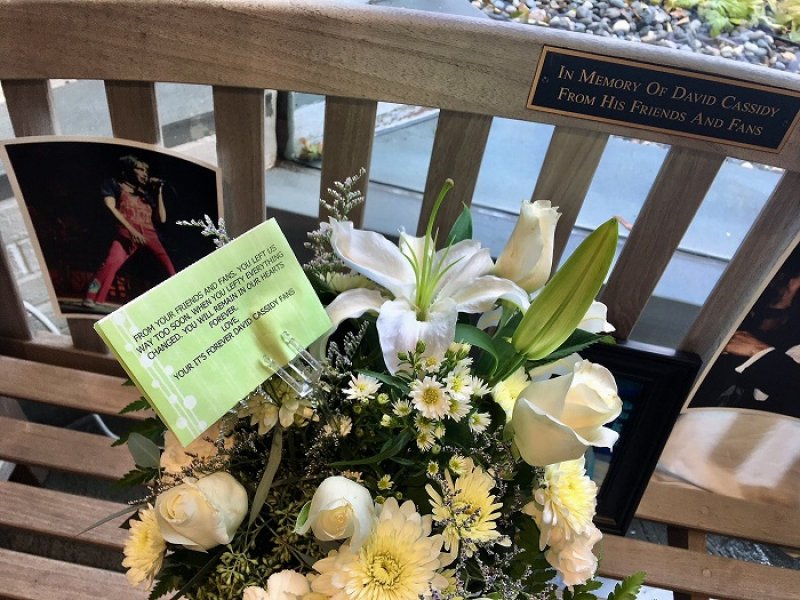 36- “In Memory of David Cassidy: From his Friends and Fans.” One of two benches honoring David Cassidy in the courtyard of the National Museum of Racing and Hall of Fame. Photo by Thomas Dimopoulos.

Last year, several dozen David Cassidy fans – some of whom embarked on their journey from a few thousand miles away – descended on the Spa City last year to celebrate the life of David Cassidy. The popular singer died in November 2017 at the age of 67.

The inaugural event, billed as “A Celebration of David Cassidy’s Life,” was initiated by Cassidy fan Samantha Cox, from her home in Indiana. “I chose Saratoga because he was into horse racing and he mentioned it as his favorite place in the world,”said Cox, adding that she took on as her New Year’s Resolution a mission to do something to honor Cassidy’s life.

Cassidy appeared on The Partridge Family TV series, which aired on ABC from 1970 to 1974, and subsequently launched a solo music career. He charted more than one dozen Top 100 hits in the early 1970s, both as a solo artist and in his role as a member of the Partridge Family.  Cassidy’s passion for equines frequently brought him to Saratoga, where he bought his first yearling and where in 2001 he purchased a home.

This year, a gathering to honor Cassidy will be held May 19-20.

10 a.m. - Re-dedication of the David Cassidy Benches at the National Museum of Racing and Hall of Fame, Union Avenue, Saratoga Springs.

6 p.m. to midnight - Author Johnny Ray Miller will sign copies of his book “When We're Singin',” and will be joined by Michael V. Pomarico – the multi-daytime Emmy Award winner who for over 27 years directed the soap opera “All My Children.” Live music will be performed by 45rpm and the event will include a silent auction. Up for auction: a boat once owned by David Cassidy, donated by his friends Dr. Jerry Bilinski and his wife, Darlene. Horse trainer Gary Contessa is also scheduled to perform on stage for a couple of numbers.  Location: King Neptune's Pub, 1 Kurosaka Lane, Lake George. Tickets: $35.

Noon to 4 p.m. at King Neptune's Pub - Johnny Ray Miller and Michael V. Pomarico will return for a brunch catered by King Neptune's Pub.  The celebration of David Cassidy's life will take place with people giving testimonials of how much David meant to them, live and on video. The silent auctions will also continue. Tickets: $50. Proceeds will go to the Thoroughbred Retirement Foundation, The National Museum of Racing and Hall of Fame, Columbia Greene Humane Society, Adirondack Save A Stray.

For more information on all events and to purchase tickets, go to:  www.kingneptunespub.com.

More in this category: « Art of the Dance: Posters from Hollywood’s Golden Age Coming to the National Museum of Dance Doris Day: Renowned Actress and Singer was a Dancer at First »
back to top