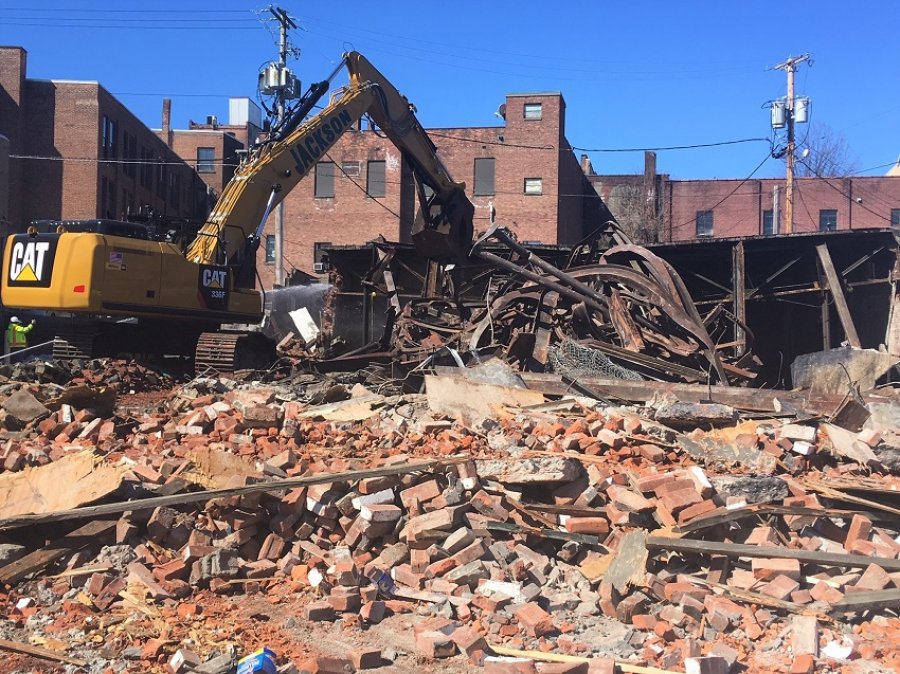 SARATOGA SPRINGS – An eyesore that stood for decades on Putnam Street was demolished Monday afternoon. In its place will rise a five-story mixed-use building with plans calling for a restaurant at the street level and approximately two-dozen condominium apartments upstairs.

“Everyone I know has loathed that building for decades,” said Jason Letts, shortly after a massive excavator, boasting more than 80,000 lbs. of operating weight, extended its 20-foot boom and clawed at the architecture, laying to waste the last wall standing and leaving a debris field comprised of twisted metal and broken bricks, splintered wood and chunks of concrete.

“Before I got involved with this, whenever I’d take my son to the library (across the street) I’d think: somebody’s got to do something about that, so I’m glad to be doing something about it,” said Letts, one of the co-owners of the proposed “Five-Three” development that will be located at 53 Putnam St., opposite the Saratoga Springs Public Library.

The initial intent was to revamp the existing two-story building and create a performance venue with a food service component. Those plans changed after the site was revealed to be contaminated from its earlier use as a dry clean facility as well as sustaining oil contamination from an offsite source.

“When we learned about all the environmental conditions, it wasn’t feasible,” Letts said. “The building had asbestos and was completely dilapidated. It had to go. The next step is removing five feet of soil, and also some oil.”

Environmental remediation is being conducted via the state’s Brownfield Cleanup Program –an alternative to greenfield development and intended to remove some of the barriers to, and provide tax incentives for, the redevelopment of urban brownfields.

Late in 2018, the group proposed the development of a six-story building featuring 40 condominium units in the $400,000 to $800,000 price range topped by a roof deck, pergola and a stair tower – which would top-off at 84 feet above ground-level.

Those plans have since been scaled back to a proposal of four floors and a partial “setback” fifth floor, Letts said. The number of condo units has also been amended to about 23 apartments in all. The price point will stay the same as initially proposed.

Earlier plans for a ground floor communal-type kitchen have also been amended and will instead likely feature a restaurant. Letts said there is strong interest from Capital Region based restaurants seeking to move into Saratoga.

The group is currently responding to some unresolved questions posed by the city’s Land Use boards, but the hope is that approvals will be secured in short order.

“We’re hoping to really get going in the fall. From that point, our construction manager is talking about an 18-month construction period,” Letts said. There are no plans for on-site parking. “That’s something we’re still working out,” he added. “We’re excited about making our city cleaner and more vibrant and we think this will be a big revitalization to some of the slightly off-Broadway areas.”

SARATOGA SPRINGS — A lifelong city resident who led efforts to preserve and enhance the oldest cemetery in Saratoga Springs was posthumously honored with the placement of a plaque and the planting of a tree in the Gideon Putnam Burying Ground.

The tree, an American beech, is expected to rise to a height of greater than 50 feet, grow to a spread at maturity of about 40 feet and for generations overlook the west side neighborhood where Eugene Corsale made his home. Corsale engaged the help of the Department of Public Works, local businesses and volunteers, and is credited with providing the leadership through which $120,000 in grant funding was secured to underwrite the restoration of the burial grounds, which had fallen into disrepair.

Graffiti marred the stone wall of the Putnam family plot and trash was strewn about. Broken tombstones were used as skate board ramps and some residents used the dirt paths of the overgrown landscape as a short-cut to Broadway. “The cemetery was ignored, overgrown, and misused,” explained Samantha Bosshart, executive director of the Saratoga Springs Preservation Foundation.

The cemetery was established in 1810 by Gideon Putnam. The Massachusetts-born visionary relocated to the area in his twenties. He laid out a wide street scheme for a broad way, built Saratoga’s first boarding house hotel, and donated a plot of land to be used as a public burial ground. While working atop scaffolding during the construction of nearby Congress Hall, Putnam fell and suffered severe injury. He died a year later. In 1812, he became the first person interred at the cemetery named for him.

In addition to the walled enclosure of the Putnam family plot, hundreds of Saratoga Springs residents were laid to rest at the cemetery through the 1840s. A century later, fewer than half of the original 232 stone markers remained. Accurate records of those buried within were not kept, and the cemetery fell into disrepair. With Corsale’s leadership, stone walls were restored, gravestones cleaned, the landscape trimmed and grass reseeded, and a perimeter fence installed to prevent vandalism.

“What we see here today is in large part (due to) Gene’s legacy,” said Bosshart, choking back tears as she recalled many purposeful visits to her office by Corsale, who died in March 2014 at the age of 85. “Gene would come by, usually with some butterscotch candy or a lollipop he got from the bank, and say: ‘You know what we have to do.’ It was a privilege and an honor to know him.”

The Gideon Putnam burying ground is the city’s oldest cemetery in the city and is listed on the National Register of Historic Places as well as being designated a City Landmark. It was preceded by the Sadler Cemetery, where bodies were first interred in the 18th century, but those bodies were mostly relocated to other cemeteries. The memorial tree was purchased and planted by the Heritage Garden Club with the assistance from Sustainable Saratoga, and a bronze plaque recognizing Corsale was provided by the Saratoga Springs Preservation Foundation.