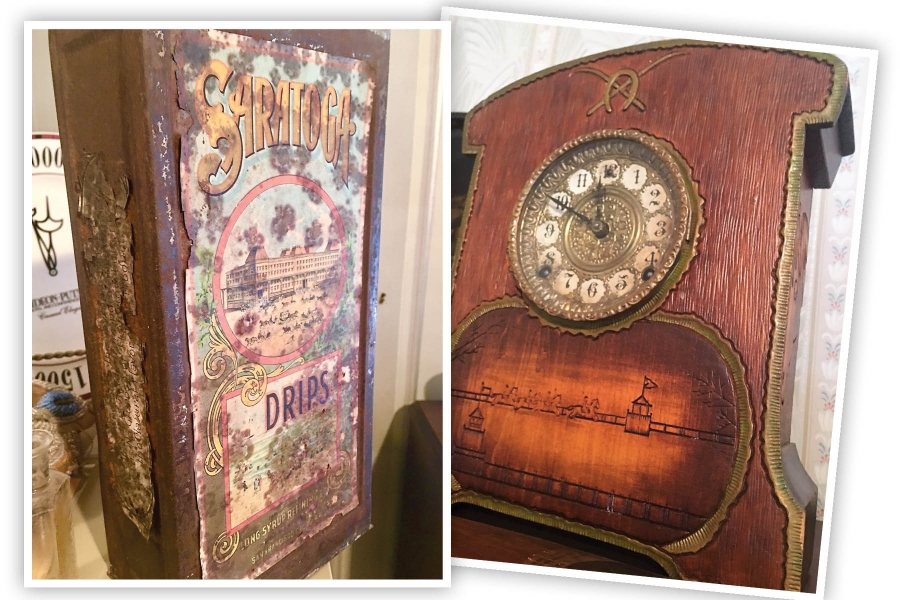 Bolster, who died last December at the age of 97, collected Saratoga Springs related memorabilia for more than a half-century. Several thousand pieces of her collection will be offered in a public sale, which begins Friday morning.

“She tried to save everything, from all the hotels and the restaurants: the menus, the keys, photographs and posters, some bottles,” says Rosemary Gold, Bolster’s niece and one of a group of a half-dozen family members coordinating the estate sale.

“I had asked her what she envisioned and we’re trying to do this the way she would have wanted,” Gold says.

The initial thought was to have everything go to one buyer. When that didn’t pan out, the family thought to offer the items individually and stage the sale of Saratoga memorabilia in Saratoga.

“There are so many things we’ve come across - all from her 50-year-plus of collecting Saratoga. She was just dedicated to Saratoga. She grew up here and she loved the city,” says Gold. A sale of some antiques was held at the end of June. “It was successful, but it was antiques. You can put a value on that. This one: how do you put a value on something where you’ve never seen another one like it?”

Bolster, whose brother-in-law was photographer and photo collector George Bolster, served as president of the city's historical society for nearly a decade, chaired the annual antique show for more than a quarter century and was the longtime secretary to the late state Supreme Court Judge Michael Sweeney.

During visits to her home, she would happily tell you she was born and raised on the city's West Side and proudly offer that she was a Saratoga Springs High School graduate of the Class of '38. With the confidence of a historian - and while flanked by drawings of bemonocled men beneath top hats and well-dressed ladies pinched at the waist - Bolster would explain how the springs originally brought visitors to the city, but it was the grand hotels and the racing that kept them coming. Bolster published a handful of books about her family and Saratoga. Her collection is so vast, researchers would visit her home to review and peruse the many pieces of the city’s past.

“She’s preserved things for the next generation, or two,” says Gold, seated in a room Bolster called her Revolutionary War room, draped with wallpaper that depicts soldiers at the Battle of Saratoga. Upstairs, in the “Saratoga Room,” vintage newspapers are collaged onto the walls. In between, there are rarely seen maps, engraved souvenir silverware, and a banister from the United States Hotel that was made into a lamp. There is a plethora of glassware, shelves lined with books, paperweights, miniature cups engraved with intricate designs and vintage chairs. There are room keys that once opened the doors inside the city’s grand hotels that are now, no longer there. There is a baton with a ribbon and accompanying dried flowers that date to the city’s floral fete in the late 19th century. And there are thousands of photographs.

“I think we’ll probably have a long line at the door,” Gold says. “We’re hoping people turn out to get a little piece of her history.”

Minnie Clark Bolster has collected thousands of pieces of historic memorabilia related to the city which she has called home for nearly a century. A new book, “Elegant and Fashionable as Seen Through the Eyes of Artists and the Words of Writers, 1787-1847,” depicts local life and architecture in prints and text, and was inspired by the research initially conducted by her friend, the late Sonia Taub. The 102-page publication features over 40 engravings, woodcuts and lithographs, many of which are extremely rare. Proceeds from the sale of the book, which is $24.95, benefits the Saratoga Springs History Museum.  The museum, located in the Canfield Casino in Congress Park, will host a book signing and reception with Minnie Bolster at 7 p.m. on Thursday, June 8. The event is free and open to the public.

Where: At home in Saratoga Springs.