SARATOGA SPRINGS — On Wednesday, November 25, 2015, Fred “Freddy” Jurgens of Saratoga Springs journeyed to his final heavenly home. At his request, he was able to spend his last days in the home he built and passed away peacefully within the presence of his family. He was 84.

Fred was born in Bochum, Germany and throughout his childhood lived in different areas of Germany. He faced many difficult and dangerous times as a consequence of WWII. The ability to survive those times instilled an inner strength in Fred that he maintained throughout his entire adult life.

In search of a better life after the war he sailed to Canada in 1951. It was there that he met his British future wife, Anne Porter. They were married in Hamilton, Ontario, Canada in 1954 and emigrated to the USA to begin their new life together in 1956. They became US citizens in 1962.

Their first years in America were spent in Rochester and Pulaski, NY. In 1962, Fred was transferred to Saratoga Springs to work on the Northway Highway project. With a strong desire for his family to have a permanent home, Fred began his own construction business in Saratoga. This enabled him to build a house on Patricia Lane while also engaging in the completion of many projects in and around the Capital District.

Fred was well known for his outspoken and passionate views on politics. Tuning in to MSNBC daily was as important to him as his cup of coffee. “Freddy” shared his opinions and knowledge of history with everyone . . . even if they didn’t want to hear it. His unique understanding of world events has always been a source of education for everyone who knew and loved him.

Many heartfelt thanks to Saratoga Hospital and all of the fine people there who helped keep him going through some rough times in recent years. Fred had a zest for life that did not want to quit. Hospice helped him find peace at the end, and for that the Jurgens Family is grateful and so thankful for the time they had with him.

Fred is survived by his beloved “Bunzie” and their five children; Kathy (Dan) Gregory, Nora Reed, Ron (Soni) Jurgens, William Jurgens and Julie Jurgens. He is also survived by his seven grandchildren; Ryan, Robert, Kasi, Chelsea, Meghan, Lauren and Max. He will be loved eternally by them all, and never forgotten.

SARATOGA SPRINGS — Walter Youngmann passed away on Saturday, November 21, 2015 at Saratoga Hospital. He was born on August 31, 1926 to the late Martin and Ottilie Youngmann in Brooklyn, NY.

A veteran of World War II, Mr. Youngmann proudly served in the Air Force. Walter was a 60-year member of the Wantagh Morton Masonic Lodge and he was also a parishioner at St. Paul’s Lutheran Church in Saratoga Springs.

Mr. Youngmann enjoyed reading, traveling with his wife and was an avid fan of the show, Thomas the Train Engine.

Calling hours took place on Tuesday, November 24 at the Tunison Funeral Home, 105 Lake Avenue in Saratoga Springs. A funeral service will be held this morning, Wednesday, November 25, at 10:30 a.m. at St. Paul’s Lutheran Church, 149 Lake Ave, Saratoga Springs. Burial will immediately follow at Gerald B. H. Solomon Saratoga National Cemetery, Deuel Road in Schuylerville. Arrangements are entrusted to the Tunison Funeral Home. Online condolences may be made at Tunisonfuneralhome.com.

Ann was born the daughter of Ann (Plasay) and Frank Ruggeri on March 9, 1961 in Saratoga Springs, N.Y. She was educated locally and graduated from Saratoga Central Catholic High School, class of 1979.

On October 23, 2010 she exchanged vows with Tyler McLaughlin. They were married in a simple service at the Ashuelot River Park in NH with close family and friends in attendance. They have been married for five years.

Ann was Catholic and attended St. Bernard’s Parrish in Keene, NH. She enjoyed collecting stamps, antiquing, going to garage sales and cooking. She was a lover of birds and dogs, and had many over the years. Ann enjoyed going to new restaurants to try various cuisines. Family and friends were very important to Ann, and she loved keeping in touch any way possible.

Mrs. McLaughlin is survived by her husband, Tyler McLaughlin of Swanzey, her children, Brandy K. Lehrer of Brooklyn, and Jacob Majors of Belize, Central America. Her parents, Frank and Ann Ruggeri of Saratoga Springs, siblings, Mary R. Offenburg and her husband Robert of Durham, NC, Frank A. Ruggeri and his wife Toni of Cuyler, NY and Grace E. Spicer and her husband Brian of Fremont, OH. In addition she leaves cousins, nieces, nephews, extended family and friends. Ann is predeceased by her son, Nicholas R. Lehrer who passed in September of 1992.

Born in Amsterdam on April 1, 1925, she was the daughter of Carrie (O’Brien) Dopp and Edward Dopp. Maryetta was predeceased by both parents, as well as her brother, Laverne Dopp.

In her early years, Maryetta was an accomplished vocalist, and was a member of the Mohawk Mills Choral Society for 15 years; she also had her own radio program on WGFM in 1946.

Maryetta was predeceased by her beloved husband, David E. Harris. Maryetta and David loved an adventure, and traveled annually to the island of Jamaica. They created many wonderful memories (and friendships) in Jamaica throughout the years.

Special thanks to Dorothy Blake, LPN, formerly of Saratoga Center for Rehab and Skilled Nursing, for always being Maryetta’s greatest advocate (from Day 1!). Also, a special thank you to the many wonderful caregivers (past and present) at Saratoga Center…your caring and compassion will never be forgotten. Words cannot express the gratitude felt toward Maryetta’s amazing Hospice nurse, Dorothea “Dorothy” Sperry, and Hospice Social Worker, Sally Yellin. Special thanks to Maryetta’s dear friends, Steve and Gary Nicolaus, Annemarie Stahl, Kathy Lacy, Cathy Desfosse, and Jeanne Brooks. In addition, our sincere thanks to Rolland Hoag and the wonderful staff at Compassionate Funeral Care in Saratoga Springs, for always helping make difficult times a bit easier.

At Maryetta’s request, there will be no calling hours or service. A private interment will be held in the spring at the Gerald B. H. Solomon Saratoga National Cemetery in Schuylerville.

He was born in Woodside, Queens and was the son of the late Jose and Aurora Blandino Azon. Glenn graduated from Music and Art High School in NYC in 1974. He was very involved with the music and played a variety of woodwind instruments. Music was a very important part of Glenn’s life. He began playing with a band at age 15 that performed at weddings and parties. Glenn was blessed with perfect pitch and was known to irritate many of his teachers when he had to correct them. Glenn attended John Jay College where he studied criminal justice and became a police officer for the Metro North Police Department. In 1979, he began working at the Long Island Railroad where he attained the rank of Sergeant. In 1986, Glenn entered a vigorous 15- month training program to become a Locomotive Engineer, retiring in 2009.

Glenn is survived by his loving wife of 31 years, Paulette and his precious daughter Aurora of whom he was so proud. Glenn was loved by many and will always be remembered for his quick wit and NYC sense of humor. Those who knew him will miss his kind smile and warm heart.

If you wish to express your online condolences or view the obituary, please visit our website at www.compasionatefuneralcare.com

He was born on September 18, 1944 in Saratoga Springs to the late Francis Duffney and Gertrude Bennett.

He was an avid fan of NASCAR, the New York Yankees and cherished his time with his grandchildren.

A funeral service was held on Monday, November 23, 2015 at Compassionate Funeral Care, 402 Maple Ave. (Rte 9 and/or Marion Ave.) in Saratoga Springs. Calling hours were held prior to the service at the funeral home.

If you wish to express your online condolences or view the Obituary, please visit our website at www.compassionatefuneralcare.com

Published in Obituaries
Tagged under
Be the first to comment!
Read more...
Wednesday, 25 November 2015 00:00

Born in Boston, MA on March 17, 1932, she was the daughter of the late Arthur and Grace Russo Ferullo. In 1962, Elaine moved from Texas where she met her husband Lynn McCormack back home in the Northeast to Braintree, MA. She raised her daughter Deborah as her husband worked for General Dynamics Shipbuilding Division in Quincy, MA and Groton, CT for over 29 years. Elaine enjoyed spending time with her cousins, family and friends during these happy years.

After Mr. McCormack’s retirement form General Dynamics, the couple moved to Queensbury, NY to be with their family. Most recently Elaine worked with her husband and daughter at their family business, Friendly Spirits Wines and Liquors in South Glens Falls. She enjoyed helping raise her granddaughter Amanda Grace at the family business which was established the same month of Amanda’s birth in June of 1997.

After Lynn’s passing in 2003, Elaine moved to Saratoga Springs to live with her daughter and granddaughters. She was tremendously proud of her two granddaughters. Tara, the oldest is currently pursuing pharmaceutical research at Albany College of Pharmacy and Amanda, the youngest, is pursuing nursing at the University of Vermont. She enjoyed most notably spending time with her family and extended family of friends.

Elaine is survived by her daughter, Deborah Ann Britton-Duval and her husband Robert John Duvall III; her two granddaughters, Tara Lynn Britton and Amanda Grace Britton, all of Saratoga Springs and her cousin, Camille Collins of Braintree, MA.

Relatives and friends may call from 3 to 6 p.m. today, Wednesday, November 25, 2015, with a funeral service to be conducted at 3 p.m. at the William J. Burke & Sons/Bussing & Cunniff Funeral Homes, 628 North Broadway in Saratoga Springs.

Published in Obituaries
Tagged under
Be the first to comment!
Read more...
Thursday, 19 November 2015 16:32 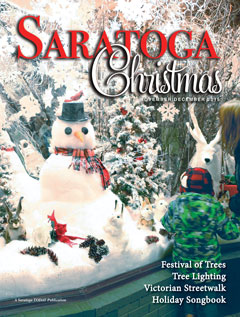 Published in Saratoga Christmas
Tagged under
Be the first to comment!
Read more...
Thursday, 19 February 2015 13:27 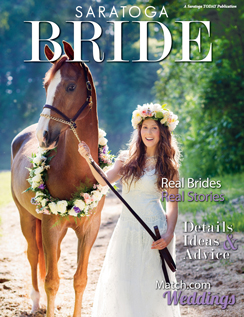 Published in Saratoga Bride
Tagged under
Be the first to comment!
Read more...
Thursday, 19 February 2015 13:08 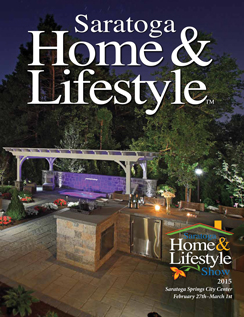 Published in Home & Lifestyle
Tagged under
Be the first to comment!
Read more...
Page 7 of 13