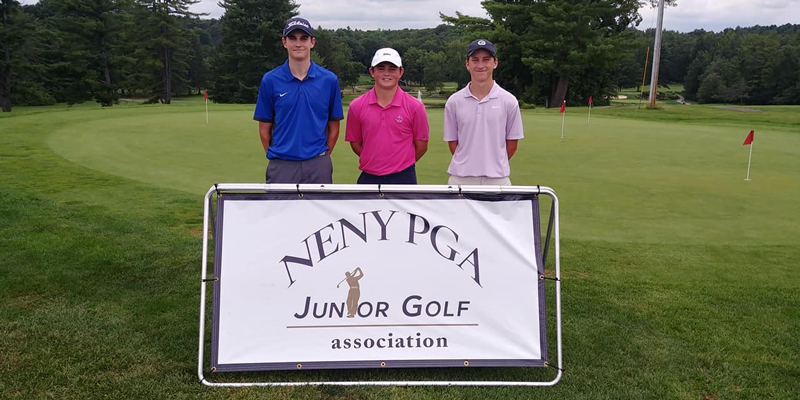 SARATOGA SPRINGS — With a two-day total of 141, winning the Northeastern NY PGA Junior Golf Tour on July 17, and again on July 19 with a score of 73, Clarkie Carroll, 16, recaps how mental stamina and persistence lead to his success.

Carroll has played golf for what seems to be his entire life. It wasn’t until he was 12 when he began playing competitively.
But before that, he overcame a physical setback – a rare form of bone cancer called, Ewing Sarcoma, which resulted in 17 rounds of chemo and replacing a portion of his femur bone with a titanium prosthesis and donor bone.
“It kind of feels good to get out of treatment and know your good, but then it’s a lot of physical therapy and working out just to get yourself back to where you were,” said Carroll. “It’s a lot of walking, and mobility I have to do to stay fit.”
With a positive mindset and a supportive team, Carroll slowly but surely began training again and working diligently to regain his skill set.
“It was frustrating being sore after every round, but I knew it would eventually get better,” said Carroll.
Throughout the process of recovery and returning to golf Carroll had his familial support system, who Carroll says are not only his biggest supporters but his biggest inspiration.
“They put the work ethic that I have into me. And also, they just support me through anything,” said Carroll. “When I first started playing, I was getting really frustrated because I was working hard, I would get nothing out of it. But they wouldn’t give up on me, and they knew I had something.”
Persisting athletically in spite of physical ailments played a role in the development of the mental stamina Carroll uses in his golf game.
“I like how much you have to put into the sport to be good at it. When you’re playing, it’s a roller coaster of emotions,” said Carroll. “You have to focus for five hours at one time. If you make a mistake you have to keep your cool and kind of get your head back in there.”
Carroll plans to participate in future American Junior Golf Association tournaments (AJGA) during the summer months, and on the Varsity golf team at Saratoga Springs High School. While only an incoming Junior, he is working towards continuing his golf career in college.
Read 1731 times

More in this category: « Rowing To Worlds: This Story Will Surprise You Camp Abilities Saratoga: Another Year of Continuing Vision »
back to top