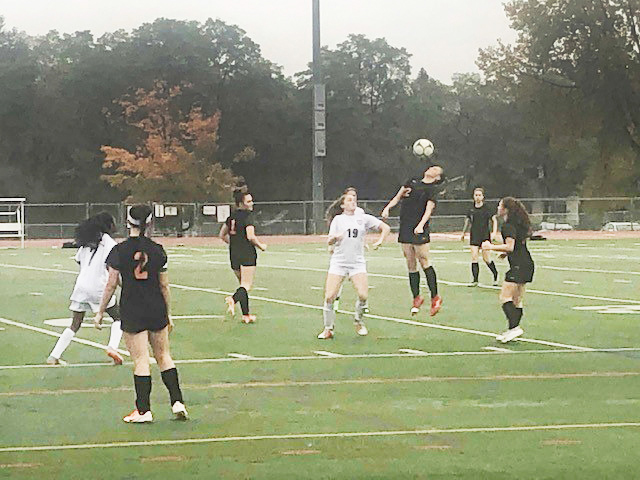 SCHUYLERVILLE — A heavy set of rain did not dampen Schuylerville girls’ varsity team as they took on Gloversville and came out with a 2 - 0 win.

Going into the game against Gloversville, Coach Paul Rogan was prepared to take on the challenging team.

“Gloversville is a tough team. They, unfortunately, have had to deal with a couple of injuries, which I think was tough for them. But we were obviously hopeful to get the victory,” said Coach Rogan.

The black horses were off to a strong start as Cassandra Cooper scored the first goal at minute 6:22.

The game maintained a consistent back and forth drive up and down the field. By the last minute of the first half, both teams aggressively hustled through quick plays as two balls went out of bounds. By the end of the first half, the score remained 1 - 0, Schuylerville in the lead.
With just over 10 minutes remaining in the game, the score still 1-0, Schuylerville player Rachel Stortz came off the field due to an injury, but that setback didn’t stop Schuylerville from putting another ball in the net and walking away with a 2-0 victory over Gloversville.

The final goal in the last five minutes of the game was a penalty kick by midfielder Brooke Keefer whose growth as a player has become a notable team asset.

“Overall the team is really coming together, so I’m excited for us coming into sectionals,” said Coach Rogan.

More in this category: « Sarah Rule: Athlete of the Week Blue Streaks Hall of Fame 2019 Inductees »
back to top