Athlete of the Week: Ava Dallas 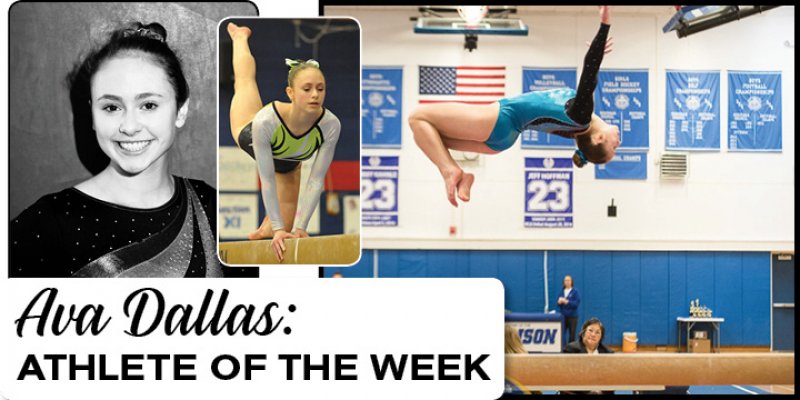 SARATOGA SPRINGS — “Gymnastics has made me strong. I feel like it broke me down to my lowest point, but at the same time, it has given me the greatest strength anyone could ask for.” – Olympian Shawn Johnson.

Ava Dallas is a record-breaking 17-year-old junior at Saratoga Springs High School with a passion for gymnastics that she pursues, regardless of the injuries or other things she sacrifices to succeed.

“I started when I was really little, around two years old, and I stopped for a while but then I started to get serious about it when I was 10,” she explained.

“Just watching college gymnastics on TV and the summer Olympics, I got really inspired and then I started taking classes at the Y and then I joined the team there.”

Dallas then switched to a club team which was more serious and eventually made the choice to join the school’s team full time. She was with Stepping Star for three years and then switched to the high school team because she wanted something more team oriented and with less hours in the gym. From November to the end of February, the gym is where you can find her.

"Right after the season is over, we have about a month and a half off and then we go back to practicing on Sundays and then when it gets into the summer, we practice twice a week,” Dallas specified.

Dallas currently holds the Section II record for vaulting, which is 9.475.

"My freshmen year on the team, I broke the record for the first time and then last year I broke it once in the beginning of the year and then once again at the end of the year at the state meet,” she explained.

However, she is still recovering from a stress fracture in her back from over the summer.

“It was very hard for me to do anything because it was so painful. When I went to the doctor, he advised that I slow down and possibly stop to prevent any further injury. I didn't want to do that and compromise my junior season so I modified my routines to do skills that didn't hurt me and now I’m building back all of my skills and all of my routines to get back to where I want to be,” Dallas said.

Dallas also coaches the little girls the basics of gymnastics at the Wilton YMCA.

"Coaching the little girls definitely provides a different perspective on the sport. As a coach, you have to think about putting the skill into words that the little kids would understand and sometimes it takes multiple times to explain things so it really makes you think about every single little part of each skill that you do. Also, to see them enjoy it as much as they do, it really brings a new enjoyment for me,” she mused.

Her family supports one another tremendously. Her sister cheers at Syracuse and the family goes to watch her games whenever they can.

She cites her father as her biggest fan: "it means a lot, I can always look over and see him cheering for me… He's like my number one fan," she laughed.

More in this category: « Athlete of the Week: Joe Amodio Climbing to the Top »
back to top