Athlete of the Week: Luke Baringer 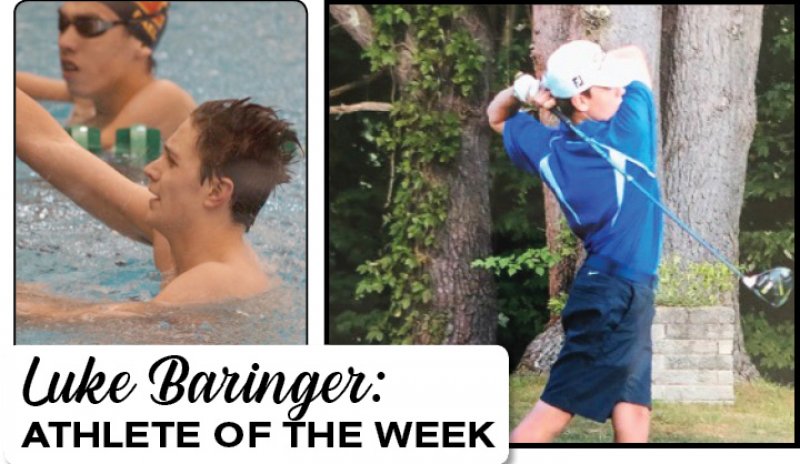 Eleventh grader Luke Baringer understands how swimmer Phelps feels. He is a top student, with a 95 average last quarter, at Saratoga Springs High School, and he is an asset to their swimming and golf teams.

“I started swimming the summer before third grade competitively. When I was in 8th grade I decided to swim on Saratoga’s team,” Baringer explained.

He swam for the Sharks competitively which is the Schenectady/Saratoga swim club.

“I just loved to swim, I thought it was interesting. I practiced a lot the summer before I started in a pool where I could swim laps,” he said.

This year, Saratoga had a small team of only 20 swimmers, and that was their biggest challenge and greatest asset.

“We were a close team, we’re all good friends. After every swim meet, we’d go to McDonald’s and it was a lot of fun,” Baringer said.

He loves the team mentality the most about swimming.

“Being on a team and making that team effort instead of being on your own and having to fight for yourself, it’s really fun to have everyone cheer you on,” he said nostalgically. His coach, William Asay, was “excellent.”

Baringer is also a golfer, which he says is a drastically different mentality from swimming.

“They’re both so different. Golf is a big mental sport and it takes a lot of practice. Swimming is just about training hard,” he said.

Golf is Baringer’s favorite sport, and he intends to play in college.

With one year of high school left, he intends to swim again next season and start training in the summer.

“This summer I plan on doing some open water swimming with my friends to prep for next season. Last summer I went to the Gators Club in Glens Falls. I swam there twice a week to train and get in shape for this past season,” he said.

School is also very important to him and last quarter he had a 95 average.

“Typically, after a day of practice I’ll get home around 6 o’clock and I’ll spend time on my academics. I probably do homework for about two and a half hours every night, I work hard,” Baringer explained.

He cites his parents, Mike and Amy, and his teammates as the biggest support system on his swimming journey.

More in this category: « SRYMCA Kicks Off "Imagine a Better Us" Campaign Athlete of the Week: Orion Anderson »
back to top