Off to College: B-Spa Athletes Signed 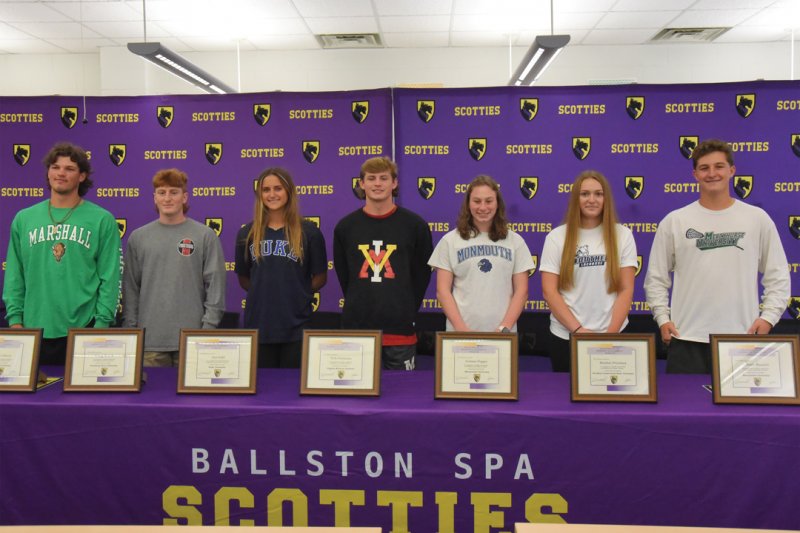 On Thursday, June 3, the annual recognition ceremony was held at Ballston Spa High School for the seniors who will be continuing their athletic careers at DI and DII colleges and universities in the fall.

“They have done special things for the district and their teams,” said Athletic Director Dave Sunkes at the ceremony on Thursday. “Unfortunately, they got the raw end of the deal, with Covid for the remainder of their career here.”

These seven seniors are:

• Chance Checca who will be attending Marshall University to play baseball.

• Gregg Dort Jr. who will be attending Frostburg University to play lacrosse.

• Ana Gold who will be attending Duke University to play softball.

• Erik Gottmann who will be attending the Viginia Military Institute to play lacrosse.

• Corinne Pepper who will be attending Monmouth University to swim.

• Heather Pritchard who will be attending Southern Connecticut State University to play lacrosse.

• Antonio Rossetti who will be attending Mercyhurst University to play lacrosse.

The Senior Awards Night also took place later that evening on June 3. Ana Gold and Erik Gottmann received the Suburban Council Excellence in Leadership Award. This award is given to a male and female student-athlete each year who have demonstrated outstanding leadership in athletics.

“I picked the Virginia Military Institute because of its prestigious academics, good athletic teams, and because I want to join the military,” said Erik Gottmann, who wants to study civil engineering. “Lacrosse has helped me become hard working and shaped me into the person I am.”

Erik’s peers have also found colleges that will be good fits for their respective futures, playing the sports they love and keeping up with their studies.

The academics and life on campus of Marshall University are what Chance Checca likes about his future school. Chance said that at Marshall he can continue what he wants to do in life – play baseball and study business, and possibly physical therapy too.

These student-athletes have all learned something from their time in the athletic programs and from the coaches at Ballston Spa that they will take with them to college.

Heather Pritchard said that when she visited Southern Connecticut State University, she fell in love with everything they had to offer, and she plans on studying nursing. Heather has found her group of friends through playing lacrosse at Ballston Spa, and has also learned how to take leadership roles.

Corinne Pepper said she picked Monmouth University because they had both the major she wanted and a fast swim team. She plans on studying Physical Education and Health.

“Swimming for Ballston Spa has taught me hard work and dedication,” said Corinne. “And it has brought me a good group of friends.”

Read 513 times
More in this category: « Explore the Great Outdoors This Summer at West Mountain Grand Slam!: Challenger Night »
back to top