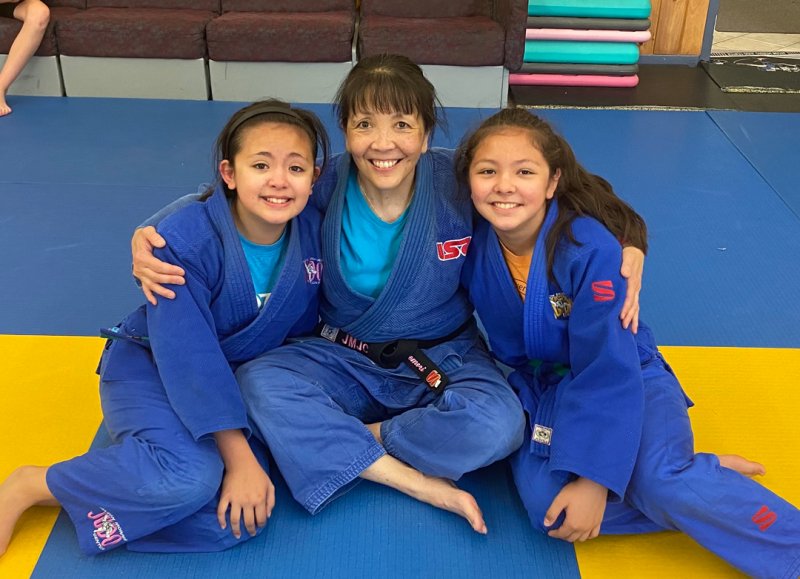 Teri Takemori with her twins, Randi (left) and Dani (right).

Takemori is originally from Alexandria, VA where she started Judo at her father’s (Jimmy Takemori) nationally renowned club, Washington Judo. Teri started at the age of 10 and quickly was a top junior competitor winning High School Nationals. She then went to school at San Jose State, who had a good college Judo team. After graduating from San Jose State, she moved to the Olympic Training Center in Colorado Springs, CO to continue her Judo training.

Teri enjoyed a prolific senior career which was highlighted by her 1985 Gold Medal at the prestigious Pacific Rim Championships held at the famed Kodokan in Tokyo, Japan. Teri medaled at the US Senior Nationals eight times and reached the podium at the US Open five times. After her prolific competitive career, Teri rose in the ranks of the refereeing world to achieve the highest international level, which was an “A”, culminating in being chosen to referee at the 2003 World Championships in Osaka, Japan. She was also an Olympic alternate referee for the 2004 Games. Takemori also co-founded the internationally renowned Jason Morris Judo Center (JMJC) in 2000 with her husband, 4x Olympian, Jason Morris. The JMJC has created 9 Olympians, 408 International Medalists, and 133 US Senior National Medalists in its 21-year history. The JMJC also hosts the annual Morris Cup Judo Championships held at the Burnt Hills High School.

More in this category: « The "Ultimate" Sport 2021 Summer Sports Camps »
back to top