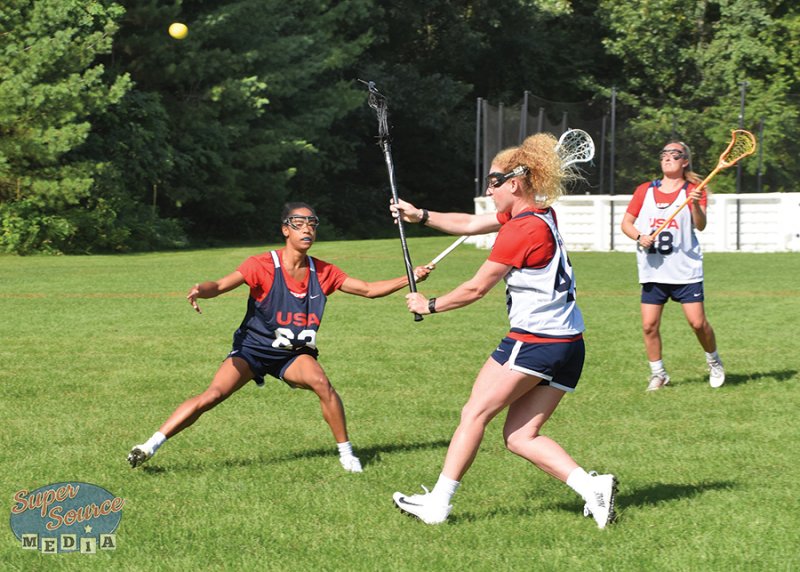 SARATOGA SPRINGS — Team USA Men’s and Women’s Lacrosse geared up in their red, white, and blue to practice in Saratoga this past week.

The Saratoga Youth Lacrosse Association hosted the teams at their lacrosse complex for practices on Aug. 2, 3, and 4 in preparation for their exhibition games in Lake Placid on Aug. 3.

These practices and exhibition games, as Skip Lichtfuss, Director of National Teams & High Performance for USA Lacrosse, explained, also served as an “exploration tryout camp” for the national team. The United States will field both a men’s and women’s national team at the 2022 World Games, a multi-sport Olympic-style event, in Birmingham, AL next summer.

These practices in Saratoga were the first co-training sessions with both the men’s and women’s teams on the same field at the same time, as they are adapting to the new “sixes” style of play.

“It will allow for a better showing of the sport,” said Lichtfuss. Adding that the new style and these practices are a “great way to expose younger players to lacrosse.”

Some players on the team are collegiate-level athletes and some are pros in the PLL (Premier Lacrosse League). They come from across the United States to play on the teams, but one player in particular got the chance to return to her hometown.

Amy Moreau, who sported #43, is a rising senior at the University of Massachusetts Amherst and graduated from Schuylerville High School in 2018. She grew up playing on the fields at the Saratoga Youth Lacrosse Association complex and has now come full circle to practice there as a part of Team USA.

“Coming back here to play with USA across my chest has been a surreal experience,” said Moreau.

The Saratoga Youth Lacrosse Association is a 501(c)(3) organization that provides Saratoga’s youth with an opportunity to play one of the fastest growing sports – lacrosse. To learn more about USA Lacrosse visit usalacrosse.org.