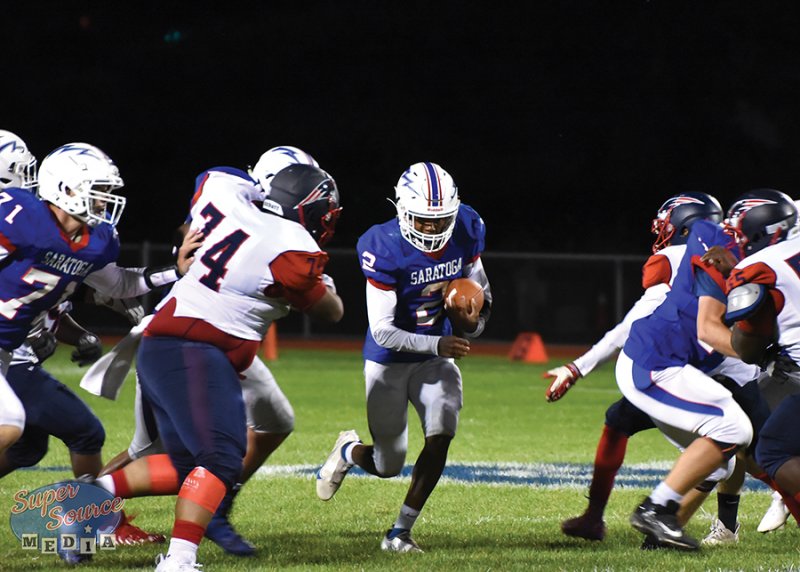 Guilderland defeated Saratoga Springs 33-0 in a Class AA matchup on Oct.1. The Flying Dutchmen honored lineman/linebacker Troy Berschwinger at the start of their homecoming game by carrying his jersey onto the field; Berschwinger was recovering from emergency surgery at Albany Medical Center.

After going 73 yards on their first possession, Guilderland’s Devon McClaine punched it in from 5 yds. out. Dillion Blanchard pushed the score to 10-0 on a 27 yd. field goal in the second quarter. With seconds remaining in the first half, Ty Santabarbara found Mitchell Mackissock on a 6 yd. TD pass to make the score 16-0.

In the second half, Blanchard kicked another field goal from 26 yds. out and Marcus McClaine would later score on a 30 yd. punt return. Eli Molchan closed out the scoring with an 11 yd. TD run after intercepting a Blue Streak pass on their prior drive.

On defense, the Flying Dutchmen held the Blue Streaks to five first downs on 88 yds. of offense.

Burnt Hills opened the scoring with Tyler Manning connecting to Kevin Carney for a 55 yd. TD pass. After Jaleel Joseph’s two rushing TDs, one for 45 yds. and the other for 4 yds., Burnt Hills had a 21-0 lead at halftime. Michael Subuttoni was 3 for 3 on extra points at the half.

In the third quarter, Queensbury got on the board with Trevon Bailey’s 52 yd. rushing TD. Burnt Hills battled back with an 18 yd. TD pass from Manning to Carney.

Passing, Manning was 8 for 10 for 136 yds and 2 touchdowns that both found Carney. Carney had 112 receiving yds. on 6 catches. Subuttoni was 6 for 6 on extra points.

Queensbury’s 341 total yds. were all gained on rushing plays. Bailey had 7 carries for 129 yds. and Zion Freeman had 13 carries for 88 yds.

BH-BL plays Albany next at home on Saturday, Oct. 9. Queensbury plays LaSalle at LaSalle Institute on Friday, Oct. 8 under the lights.

The Ballston Spa and South Glens Falls Class A matchup on Friday, Oct. 1 was postponed due to coronavirus protocols.

A post on the Ballston Spa Athletic Department’s social media announced the following:

“We regret to inform you that the South Glens Falls School District has notified us that they will be unable to field a team for tonight’s game due to a positive case of COVID-19 and required quarantining of members of their varsity team.”