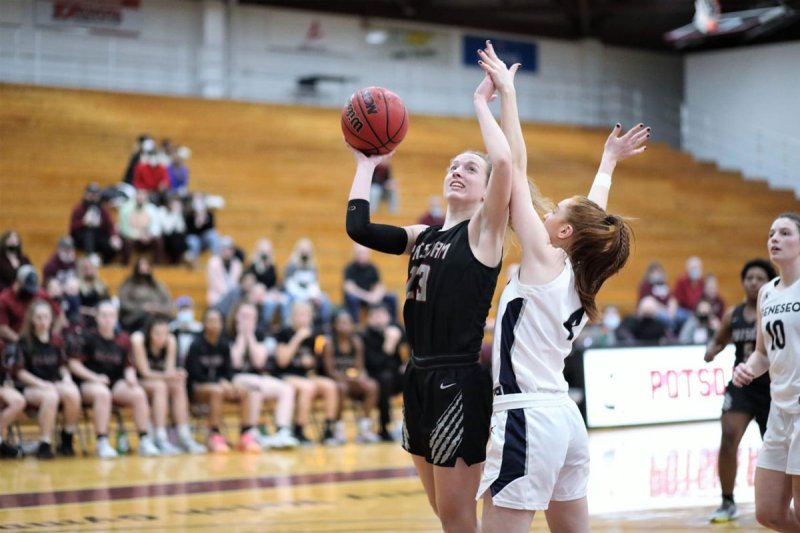 POTSDAM — Caroline LaFountain is overcoming the competition at SUNY Potsdam this season, while simultaneously overcoming an injury.

LaFountain, a 2019 Saratoga Springs High School graduate, is a sophomore at SUNY Potsdam and a guard on the Women’s Basketball Team. She has played a huge part in Potsdam’s 12-12 season, all while she recovers from an injury.

After the 2020-21 season was lost to due to COVID, LaFountain started to develop ulnar nerve damage that caused her pain when shooting and dribbling – the essential roles of her position on the court. It’s been a long recovery process for her to gain full movement back in her elbow following the surgery she had in September, but LaFountain was determined to come back.

“I struggled a little in the beginning with the mentality, but I managed to do it. I managed to get my shot back,” said LaFountain.

And her shot has been game changing, as LaFountain contributed to two huge wins this season against Brockport and Oswego.

LaFountain scored a game and career-high 22 points during their second match-up against Brockport, contributing to Potsdam’s 75-69 win and accomplishing a personal goal she set for herself this season.

“We were down almost 20 points, but we knew what we had to do to beat them,” said LaFountain. “I just kept drawing fouls and getting to the line.”

Earlier in the season, she made a buzzer beater, a long jumper from the corner, to secure a 65-64 win over Oswego.

“The play was to get it to the big, but there were other options, and I was the most open. I was a little hesitant, but I went for it,” said LaFountain. “It was a surreal moment.”

The Potsdam Bears just missed playoffs but have had one of their best seasons in recent years as far as wins. LaFountain hopes to make it to playoffs next year, and she continues to set goals for her herself as she works towards fully recovering.

More in this category: « Martin Reaches Round of 16 in Tel Aviv Glens Falls Native Now a 2x Olympic Coach »
back to top