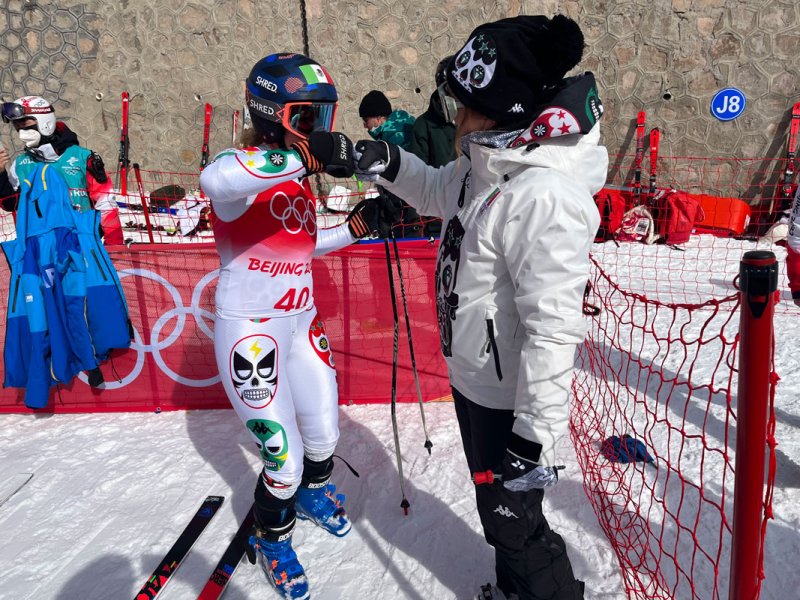 Strange is a Glens Falls graduate and Skidmore college alum, where she competed as a downhill racer for both schools. She now lives in Utah and coaches alpine skiing full-time.

“I took a pretty traditional path, but I love that about how I got through the years from skiing to coaching full-time,” said Strange. “It has allowed me creative license and paved the way for me to help Sarah continue to compete.”

Strange is referring to US Ski standout Sarah Schleper, who now competes for Team Mexico after coming out of retirement. Strange first met Schleper, who is also a coach, after bringing some athletes to train at Schleper’s ski camp.

After becoming fast friends, Schleper first asked Strange to coach her in the 2017 World Championships in Switzerland in place of her coach who was injured. Through these opportunities with Schleper, Strange secured a job with Team Mexico and coached her first Olympics in 2018 in PyeongChang, South Korea.

“This experience felt more familiar, and there were less nerves. After four years of not seeing each other, the team got right back together,” said Strange about reuniting with Team Mexico in Beijing for the 2022 Winter Olympics.

“It was definitely different than the first time in PyeongChang [due to COVID],” she added, “but everyone was friendly and just happy to be there and be competing again.”

Although Mexico didn’t win any medals in Alpine Skiing in Beijing, Schleper still had an impressive showing, placing 37th amongst her competition.

“These Olympics were filled with unexpected results that kept us all on our toes, but it was exciting,” said Strange. “The Olympic miracle is real. We didn’t know who was going to perform because of the pressure, but some of our underdogs stepped up. Team Mexico did well, and we enjoyed and soaked up the experience.”

In addition to coaching for Mexico, Strange coaches full-time at Rowmark Ski Academy in Utah. She also owns and operates Party Beach Ski Camps, a free-ride ski camp for kids and adults, out of Mt. Hood Oregon. As stated best on the Party Beach website:

“Our Mission: To provide a mountain experience where having fun is paramount to athletes’ evolution in skiing and in life. We challenge you to discover who you are as a skier in a safe and inclusive environment.”

The next Winter Games will be held in two different cities – Milan and Cortina d’Ampezzo, Italy – with the opening and closing ceremonies in different places for the first time in Olympics history. We are looking forward to seeing Strange and Schleper competing for Team Mexico in 2026, and cheering on all the future Olympians that Strange trains.

More in this category: « Saratoga Grad. is Making Every Shot Count Toga Hockey Makes it to Section II Quarterfinals »
back to top