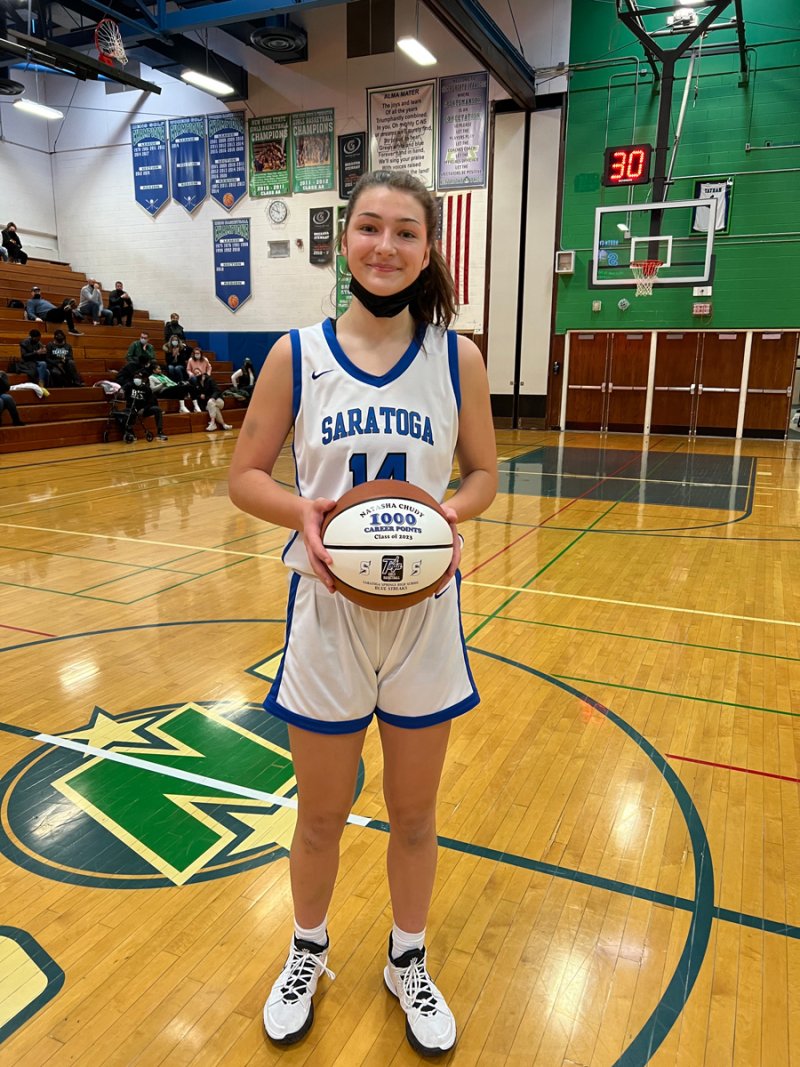 SARATOGA SPRINGS — Currently in her fifth year of varsity basketball, Saratoga Springs senior Natasha Chudy is no stranger to receiving recognition for her work on the court. This winter, however, Chudy received recognition on a national scale, as she was nominated for the McDonald’s All-American Game.

“I’m definitely really honored to have this nomination,” said Chudy. “It’s super important. I think it’s really cool to be in that category, and people looking at me and what I’ve worked for.”

Blue Streaks head coach Robin Chudy, who is also Natasha’s mother, said it has been “wonderful” to watch her daughter progress through the years.

“As an eighth-grader coming on our varsity team, it’s kind of neat to see where she is now,” said Robin Chudy. “And I think it’s a testament to her hard work, and all the practices and things that she’s put into her game, which is great. It’s really nice to see such a really big accomplishment come her way. Even to be nominated is just really remarkable.”

The Blue Streaks’ dynamic senior first joined the varsity team as an eighth-grader, and quickly joined the team’s starting lineup. In the five years since, she has reached 1,000 career points, become the team’s all-time leading rebounder, and been named to a pair of All-State teams.

While her numbers certainly jump out, Robin Chudy said she is most impressed by Natasha’s role as a “team player.”

“She knows when to make the pass, she’s not selfish at all. If you watch her when she’s sitting on the bench, it’s really neat to see her cheer for her teammates,” said Robin Chudy. “She’s jumping around and going crazy for the girls when they’re scoring and doing some really good things. That part of her game is hard to come by, it really is. That kid who is not selfish, and has a really high basketball IQ as well.”

The team’s chemistry and closeness was emphasized by the pair, with Natasha saying that having strong chemistry with her teammates is one of her priorities.

“I’ve realized over the years that really does make a difference,” said Natasha Chudy. “I feel like I have such a good relationship with every girl on the team, and try to make sure that everyone feels like a part of the team. That’s really how you have a successful team at the end, if you work well together in every way.”

Chudy also said she has enjoyed playing for her mom, who she called “the biggest influence in my life.”

“She is my mom, and she knows me the best, so she pushes me because she knows where I can be,” said Natasha Chudy. “Sometimes it gets hard, but honestly, she’s been the biggest influence in my life in many different ways, especially basketball. I think her pushing me all these years has really, really paid off, and I love that she’s my coach.”

As a coach, while Robin Chudy admitted it can be “hard to turn it off” at times, she also said Natasha is a “great listener” who receives plenty of feedback from her family.

“She takes a lot of the things that we say at our house,” Robin Chudy said. “Our entire family is a basketball family. She grew up with three older siblings who played a ton of basketball, and we all say all the things that we think she needs to improve on, and try to give her the accolades when she does a good job.”

Chudy is committed to play college basketball at Lafayette College in Easton, Pennsylvania, a Division 1 school and a member of the Patriot League. Chudy said she wanted to choose a school that had a strong balance of academics and athletics.

“When I made the decision, I chose a school that was a great balance of athletics and academics. But, especially, the coaches are amazing,” said Natasha Chudy. “They were very welcoming. They’re just so amazing. They would help me through this time, and they just wanted the best for me, and what was best for me was being with them.”

Robin Chudy was also complimentary of the Lafayette coaching staff, and said she is “so proud” of Natasha.

“Proud of her for all of her accomplishments and everything she’s done. This is what she’s worked for, which is great,” Robin Chudy said. “She picked a great school, with, like she said, a great balance of academics and athletics. For me, as a parent, I wanted her to find a home. It seems like the coaching staff is so welcoming, and I think that’s going to be a great place for her.”

But for now, the focus is on the current season. The Blue Streaks are 8-5 entering a non-league contest against the Albany Academy for Girls on Tuesday. The team has been dealing with injuries, Robin Chudy said, but have high hopes for sectionals.

“A couple are out with injuries. We’re rotating kids around and trying to get everybody healthy again,” Robin Chudy said. “I feel like if we can all get on the court at the same time, healthy and ready to go, we’re going to be a tough one to beat. We really are.”

Natasha Chudy said she feels the team’s chemistry has improved, saying that Saratoga basketball “prioritizes being a team.”

Ultimately, Robin Chudy said the opportunity to coach Natasha has been “amazing.”

“It’s been an honor to coach my kid all these years. And difficult. You’ve got a lot of people watching, making sure that you make the right calls with your kid, because it’s obviously sensitive,” said Robin Chudy. “You have a lot of coaching staff around you to make sure you’re grounded and you know you’re making the right decisions.

“But I don’t think I’d ever trade these years. It’s been amazing.”