The Definition of a Role Model: Derek Jeter 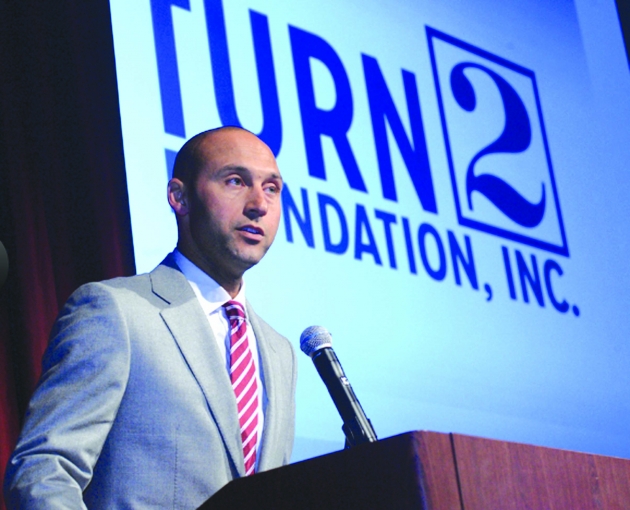 When you think about what has been recently going on in professional sports, from domestic violence and drug usage, you begin to realize how tall Derek Jeter stands. He is the definition of all that is good and what it’s meant to be, in an era of disappointment in our American sports heroes. He is the concise definition of what a sports legend is summed up to be in society, along with the earned admiration for his role and accomplishments. His social life is usually not accessible for our viewing. He’s never been identified as a party boy and he basically keeps to himself.

When Jeter dates a woman, you seldom hear about who he’s going out with and where he takes his date. In other words, this man who has lived his career as a professional baseball player, in an exemplary manner, is private in his life off the field and living in a responsible way. I can use many superlatives to describe his character, but with one simple adjective, he is probably the most “admired” professional athlete in America, maybe the world.

He is also the all-time leader in hits, games played, plate appearances, at-bats, stolen bases and singles (and strikeouts), for baseball’s most storied franchise.

One interesting Yankee statistic that may never be broken or even challenged: He is a 12-time Yankee captain, the longest run in franchise history.

I’m about 30 years older than Derek Jeter, but I pretty much consider him one of my favorite sports heroes. Moving away from Yankee Stadium, Jeter has changed the lives of many people. He’s a man who credits his parents and grandparents for all of his success. He founded the Turn 2 Foundation, an organization that steers kids away from using drugs and alcohol. His foundation, since 1996, has raised over $16 million to help youngsters who come from an environment surrounded by drug and alcohol abuse. Being a Major League Baseball player, Jeter has been tested for drugs numerous times, but of course, he hasn’t ever taken or used drugs.

In my research for information about Jeter, there were no negatives about this man, on or off the field. Here’s a guy who gets cheers from opposing fans because they know what he stands for. He’s clean, almost to a credit of disbelief, and in a world of scrutiny by the media, there are few like him in professional athletics. His stellar attitude is what guides him through how he lives his life. He is for real, and despite being one of the best shortstops in the history of the game, he carries no chips on his shoulders. He appreciates his fan base and doesn’t hesitate to let their appreciation go unnoticed.

Here is a personal story for me about the man Derek Jeter.

About nine years ago, my daughter was working and living in Manhattan. My wife, Ann, and I were visiting our daughter, Cait, on a beautiful fall weekend. Cait took us to a well-known Italian restaurant, famous for its pizza. In walks Jeter with a date.

At the time, Ann was teaching fourth grade at Lake Ave School. She had an inspirational thought that maybe she could get Jeter’s autograph for the kids in her class. She pulled out a clean bank deposit slip and pen from her purse, thinking maybe she could catch Jeter before he left the restaurant.

My feeling was that he didn’t want to be bothered, which was something I’m sure he always has to deal with. I tried to discourage her from executing her plan, but it didn’t matter. She carried out her plan as Jeter and his date were leaving their table and she, Ann, quickly moved to the entrance of the eatery.

I could see her through the store front window, as she approached the Yankee captain, and I saw him smile as he took the pen from her and signed the bank slip. Many celebrities would shun such maneuvers by a fan, but according to Ann, he was extremely nice and accommodating and said, “sure!”

Derek Jeter will be missed by many baseball fans across the country, especially Yankee fans. It just won’t be the same in the absence of the legendary No. 2 from the New York lineup. I would like to, metaphorically speaking, make a chemical solution of his character and put it out on the market.

I wouldn’t even sell it. I would give it away. Seriously, think about it?

He’s a legend with a clean character and impeccable attitude. It’s flawless. How I wish he could share his gift and even inject it into the many athletes of all levels, from little kids to professionals.

But, his character is what makes him so special and so unique. My metaphor of making a petri dish of Derek Jeter’s DNA to share will remain a fantasy. He will be missed.

Read 6209 times
More in this category: « Terry Jones’ Goal: ‘Spread the Ball Around’ The Webb Simpson Interview »
back to top