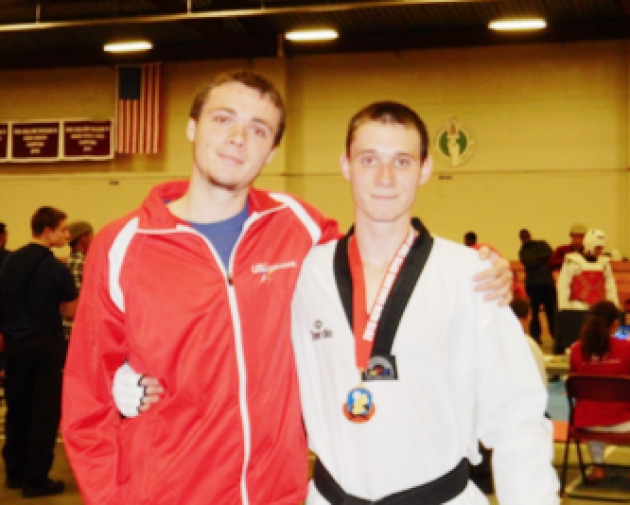 SARATOGA SPRINGS – Two young men, who are brothers and Saratoga Springs natives, have the distinction of attaining high levels of achievement at the national level in the sport of Taekwando.

The Hall brothers – Patrick, age 22, and Brian, 19 both third degree black belts, coach each other in collegiate and national tournaments and have compiled an impressive collection of credentials.

Patrick won the USAT (USA Taekwondo) New York State Championship last March, and the New England Open this past October. He competed at the Collegiate Nationals in Delaware this past April, and the USAT Nationals in Austin this July with his brother Brian as his National Level 1 Coach.

The two reverse the coaching roles depending on who is competing! Most recently, Brian coached Patrick to win the New England Open at M.I.T. The same weekend, they flipped roles and

Patrick coached Brian to a 15-6 win at the M.I.T. Sport Taekwando taeTournament.

The boys have been encouraged since their childhood by their parents, Maura (a third degree black belt) and Gary Hall (first degree black belt). The boys coach their mother in intramural competitions. Both brothers attended St. Clements Elementary School and Saratoga Central Catholic School, where Brian was a member of the 2014 WAC champion basketball team.

More in this category: « Off To A Flying Start! Top Sports Stories of 2015 »
back to top