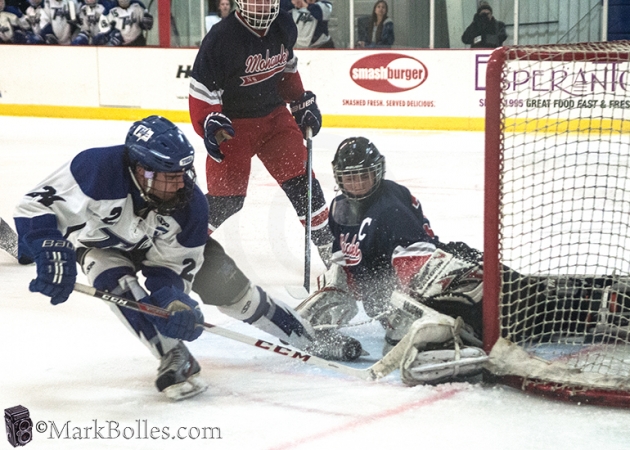 SARATOGA SPRINGS – It wasn’t the easiest win. But in the end, a quality team got the job done.

Overcoming a tremendous performance by Niskayuna/Schenectady goalie James Blanchfield, the Saratoga Springs Blue Streaks registered a solid, yet hard-earned victory over the Mohawks, 5-1, in their first (quarterfinal) playoff match on Wednesday, February 17, at Weibel Avenue rink. As such, Saratoga will play a semifinal playoff game against Burnt Hills/Ballston Spa this Friday, February 19, at 6:45 p.m.

Saratoga came into the contest with a perfect 13-0 record in league play, while Nisky/Shen was 3-10. Many times, the playoffs will dictate a different, more defensive style of play – as teams feel each other out in the beginning. That was hardly the case with the Blue Streaks here – they came out early and often, forcing Blanchfield to make save after save to keep the game scoreless after the first period. Indeed, with 12 minutes remaining in the second period, Saratoga had outshot the Mohawks 25-2!

While the Blue Streaks were never really threatened in the contest, with literally 95+ percent of the action in their offensive zone, it took quite a bit of effort for them to break through. But they stuck to their game and kept on flying to the net, peppering Blanchfield with shot after shot until finally, at 3:38 into the second period, co-captain Josh Dagle slipped one by Blanchfield, assisted by co-captain Elliot Hungerford. This was followed less than a minute later, at 4:07, with another Blue Streak tally by Colin Paton, assisted by Caleb Smith to put Saratoga up 2-0.

The Mohawks managed their lone goal, on the power play at 8:16, but Saratoga had the answer just over a minute later, as co-captain Jake Fauler, assisted by Brendan Coffey and Hungerford, made it 3-1 Saratoga, and essentially iced the game as you could feel that, despite Blanchfield’s heroics (he would finish with an impressive 51 saves in the contest), the offensive swarming tsunami of the Blue Streaks were a force that would not be denied.

In the third period, Saratoga added to their lead, with Paton registering his second goal at 1:20, and then a power play goal by Hungerford, assisted by Fauler and Coffey at 11:29, closed out the scoring.

Coming in, this had all the elements of a “trap game” – in which Saratoga came in with everything going for itself – a top seed playing at their home rink, and running into a hot goalie. And yet Saratoga made a statement that they were not going to be denied. The fact that they overcame stop after frustrating stop and kept working, sticking to their plan and, at the end, enabling their superior talent to come through, sets them up well for Friday’s semifinal match against Burnt Hills/Ballston Spa – a team which bested CBA on Wednesday, 5-3, and will come in riding an 11 game winning streak.

The winner of Friday’s semifinal game will meet the winner of LaSalle vs. Tri-Falls in the Section 2 final on Thursday, February 25.