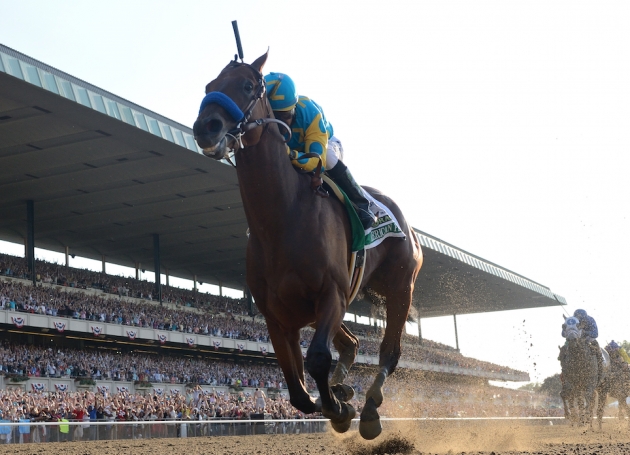 OZONE PARK - The 2015 Belmont Stakes, which saw American Pharoah crowned as a Triple Crown winner and was widely praised as the most successful mega-event in the history of the New York Racing Association, Inc. (NYRA), has been chosen as a finalist for Sports Event of the Year by Street & Smith's Sports Business Journal.

The first three-day Belmont Stakes Racing Festival, highlighted by the 147th running of the Belmont Stakes, generated more than $165 million in total wagering and was the culmination of a year-long, organization-wide planning effort that saw unprecedented community involvement and articulated NYRA's focus on enhancing the full guest experience. The sold-out crowd of 90,000 on Belmont Stakes Day and an average of 20.6 million viewers on the National Broadcasting Company Sports Group witnessed American Pharoah's run into history.

“We are honored to be nominated as Sports Event of the Year," stated Christopher K. Kay, President and CEO of the New York Racing Association.” The selection as one of the finalists validates the steps undertaken to make the 2015 Belmont Stakes Racing Festival, and those for future years, a big hit with sports fans: a three-day event filled with world-class horse racing, outstanding entertainment and unparalleled dining and hospitality. We congratulate the other nominees on their achievements."

Joining the 2015 Belmont Stakes as finalists for the Sports Event of the Year Award are Super Bowl 50, the 2015 FIFA Women's World Cup Final, Mayweather vs. Pacquiao boxing match, and the Bojangles Southern 500.

Winners of the 2016 Sports Business Awards, a celebration of the top achievements in the sporting industry in 17 categories, will be announced live on May 18 at an awards ceremony at the New York Marriott Marquis.

More in this category: « Saratoga Wilton U14 Soccer Club Has a Great Tournament! Saints on the Move! »
back to top