Saratoga Sets the Pieces in Motion 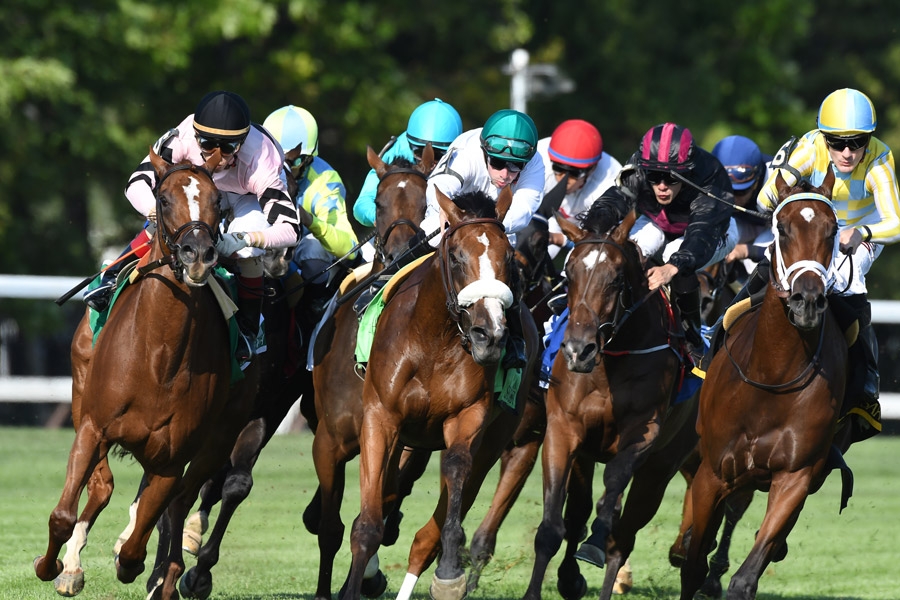 T’was the night before ‘’Toga, and all through the (club)house, not a creature was…

No, won’t go there, but you get the idea. It’s that special time of year when childrens’ smiles seem brighter, food tastes better and domestic nagging sounds like Beethoven’s Ninth.

Once the dust settles from the Triple Crown, the pieces on the board start moving in all these interesting directions. Saratoga represents the middle of the calendar year, give or take a summer week or two. From the top of Mount Saratoga, a horse, a trainer of horses, an owner of horses, a jockey of horses, a horseplayer of horses, can see, out in the distance, Sauron’s eye of the Breeders’ Cup.

All roads funnel to Del Mar this year, and this is the time to start looking out at to that beacon less than four months away. Saratoga, Del Mar, and to a lesser extent Monmouth, play major roles in setting that table on the first weekend in November.

The major questions are how will the 3-year-olds continue to develop? Will the precocious Triple Crown series winners plateau, or will they move forward into racing maturity to supplant the tenured older horses? Will those older horses remain sound and happy? Will Arrogate (speaking of late-developing 3-year-old of yesteryear) grow bored and tired? Will he grow, ahem, arrogant?

With no disrespect doled out to the 2-year-olds running this weekend at Saratoga or the monstrous grass horses, the real brass starts the second weekend of Saratoga where we see the Jim Dandy and Curlin Stakes. Also, the Haskell at Monmouth Park. Ball parking here, but with an average field of, say, 10 horses in the Curlin, Jim Dandy and Haskell, that makes about 30 horses vying for the 148th Travers Stakes with a max field of 14 for the Mid-Summer Derby.

Always Dreaming recently whipped through five-eighths in 1:01 and change, which made Pletcher say, “I thought he went great. He was nice and relaxed with a steady progression and good gallop out. He’s rounding back to top form, and we’re still on target for the Jim Dandy.”

Cloud Computing, down at Belmont Park, worked a half-mile in 48.29 for Brown, a tune up after he went a bit quick in a previous drill, but a sign that the horse is keyed up and ready for his first start since winning the Preakness from off the pace.

“He’s so competitive that he pulled the rider there,” Brown told TDN. “It caused the work to be a little faster than I wanted but, then again, it seemed like he was moving very easily.”

With Arrogate staying on the West Coast in preparations for the San Diego Handicap, Pacific Classic and, of course, the Breeders’ Cup Classic, Gun Runner takes aim (sorry) at the Grade I Whitney Invitational, as perhaps Arrogate’s chief North American rival.

“He’s a very impressive horse who continues to do well,” Asmussen said in a release. “He’s trained phenomenal all year, he really has. I’m very excited about the Whitney here. It should be a very competitive race against some excellent horses on a great stage. It’s a great opportunity for him.”

The eventual collision between Gun Runner and Arrogate could be the equivalent of LeBron James dunking over a fifth grader, but the anticipation is where the fun lies.

Arrogate has an unbeatable quality to him. If ever there was a race for him to lose it was the Dubai World Cup where he spotted the field a pole after the first 100 meters and by the end the race caller asked, “Have we seen the anointing of the Man o’War of the 21st Century?”

It’s not hyperbolic at this point to ask that question. He runs 10 furlongs like it’s a mile gallop.

You know, and this is probably the topic of another column, but I’ll plant the seed here, if it wasn’t for American Pharoah winning the Triple Crown and the “Grand Slam” in 2015, perhaps Arrogate would have caught fire faster. Arrogate emerged from the same barn too soon after Pharoah, who cast too big a shadow. Pharoah had that mass appeal, where Arrogate has more of that Curlin appeal, a hard-knockin’ industry star.

That’s what we can aim our glasses at from the Mount Saratoga, looking out over the vast expanse of the country to the seaside retreat of Del Mar. The pieces are in place, so now they move, onward, across the summer to the final tilt past the equinox.

Read 2640 times
More in this category: « Memorial Golf Tourney Celebrates Four Years A Conversation with The Legendary Tommy Roberts »
back to top