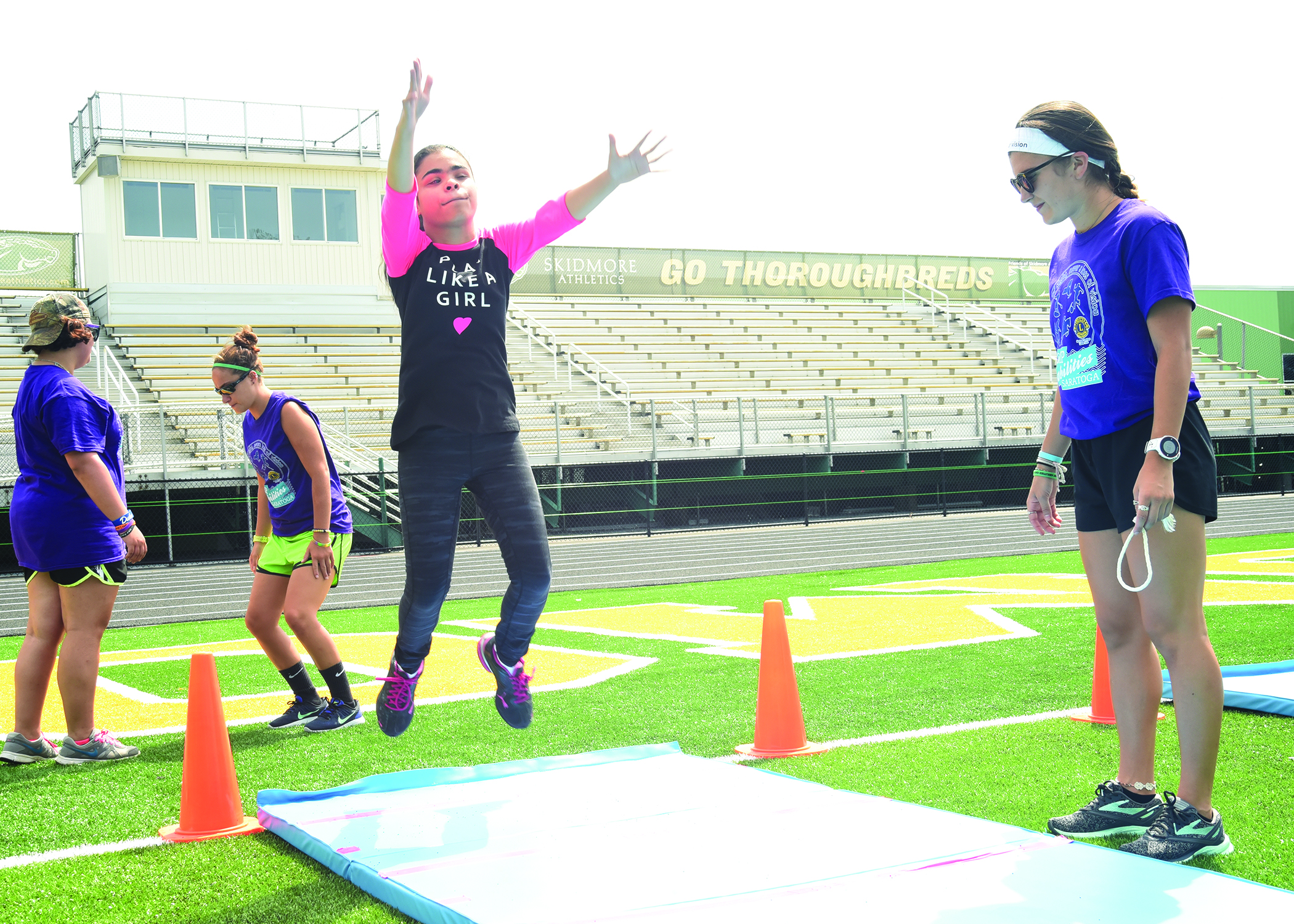 SARATOGA SPRINGS – Camp Abilities, sponsored by the Saratoga Lions Club, is in its fourth camp year this summer. This camp, which lasts a week, is an active overnight educational sports camp for children that are visually impaired. Taking place on Skidmore College campus, campers are able to experience a week of just being a normal kid.

“This is one of the only weeks where kids can just be a kid. A lot of times, they’re the only kid that might have visual impairment in their school. This week is the one time where they don’t have to worry. If they bump into something or if they make a mistake, they’re not being looked at like ‘oh you did that because you have a visual impairment.’ They just did it because they’re being a kid. They feel comfortable here,” says Tiffany Mitrakos, director of Camp Abilities.

Camp Abilities has 26 campers, each with their own counselors, so they have a one on one experience. To put on the camp itself, it costs roughly $100,000 and is $3,500 per camper, though it is funded by donations and sponsors, no money is out of the camper’s pocket to attend. The requirement for campers to attend is that the only disability they have is a visual impairment, they must be independent and otherwise capable, and they have to be between ages 10 and 18. Camp Abilities first year had 18 campers and now they are capped at 26 due to cost and less chance of forming lifelong friendships if there are an overwhelming number of attendees. Saratoga Lions Club (SLC) took on this camp as a service project four years ago and is instrumental in the planning and execution of the entire week of camp. SLC organizes all of the nighttime activities that take the campers off campus. Camp Abilities Saratoga is unique among all of the other Camp Abilities because of their nighttime activities. Other camps are confined to their campuses but with the help of SLC and donations from local restaurants, campers eat dinner off campus and attend different activities.

From day one, the staff was adamant that the kids set goals and focus on reaching them. Campers participate in sports tailored for them, such as beep baseball and goal ball while also participating in sports and activities that all peers their age play. Beep baseball, for example, is baseball tailored to the visually impaired. This game lasts six innings and only has first and third bases, which are four foot high padded cylinders with speakers that give off a continuous buzzing sound when activated. When the ball is hit, the base operator activates one of the bases and the runner must identify the correct base and run to it before a defensive player fields the ball. Each team has a sighted pitcher and catcher. Kids are also shown how to play sports not tailored for them that they can adapt and show their physical education teacher at school how they can successfully play with the other kids.

The camp is made up of 41 staff members. They have a 24 hours a day, 7 days a week nursing staff, six sports specialists with degrees in adaptive physical education, 26 counselors, and several other people who band together to help this week of camp meet it’s full potential.

A special treat for the campers is a Judo class instructed by Olympian Jason Morris, of Jason Morris Judo Center. Morris donates his time and staff to the camp.

Tiffany Mitrakos, director, has been a part of Camp Abilities for nine years. Mitrakos originally became involved at the camp’s initial location at Brockport College, where she was involved for five years before coming to Saratoga’s camp for the last four years. Mitrakos’ assistant director is Jeff Yellen, who also started with the camp in Brockport for two years and this is his second year as assistant director for the Saratoga camp.

On the Saratoga Lions Club (SLC) side, John McDonald has been a member of SLC for 18 years and is a past president of the club. He has been instrumental in the planning of the camp since it’s inauguration.

“This camp gives kids an opportunity to participate in a summer sports camp just like their peers,” McDonald echoed Mitrakos, proving the point of the camp really is for visually impaired children to feel like normal kids, if only for a week.

Joanne Soles is the current president of Saratoga Lions Club and was also involved in opening the Camp Abilities in Saratoga Springs. She is at the camp every day to oversee and enjoy.

“We are really taking advantage of what Saratoga has to offer for our night time programs. Those programs are why we stand out,” Soles said.

Some nighttime activities include going to Saratoga National for golf and disc golf, which is the new activity added to this year’s camp. They also have stand-up paddle boarding, equestrian, ice skating in conjunction with the Saratoga Ice Stars program which is also an SLC service project, and bowling at Saratoga Strike Zone Bowling Center.

“We’re already thinking about what we’re going to do next year. Our gears are always rolling,” Mitrakos said excitedly.

On the last Wednesday of every month the planning committed have phone conferences throughout the entire year to plan for the upcoming camp.

“Every year we just get better and better!” Mitrakos said.

Saratoga Lions Club motto is, “A loss of sight, never a loss of vision.”

This camp proves that vision is key.

More in this category: « John Hendrickson Appointed New President of the National Museum of Racing and Hall of Fame Two Nights; $53 Million »
back to top