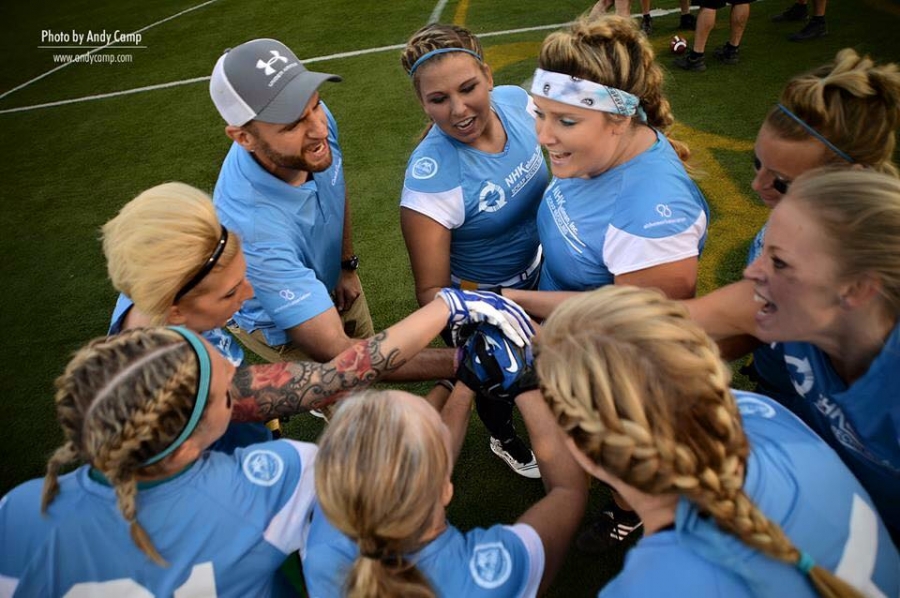 “RivALZ, where two teams of women divided to reflect rivalries such as East vs. West or Blondes vs. Brunettes compete in a flag football game to inspire fundraising, awareness, and action in the fight against Alzheimer’s disease,” said the statement.

Gates will open at 5:30 p.m. with the game starting at 6:15 p.m. BvB is a volunteer-driven and all female event. Since its inauguration in the fall of 2005 in Washington DC, this tournament has made its way to other cities nationwide. Since the initial tournament four years ago in the Capital Region, BvB has made $100,000 for the Capital Region chapter.

“In this seriously athletic, but fun flag football game, two all-female teams are divided based on the age-old rivalry between blondes and brunettes. The players, trained by experienced football players and coaches, will be practicing all summer. The Brunette Bombers are looking to win back the title from the Blonde Bombshells,” according to the official statement.

Also at the event will be food, male cheerleaders, and halftime fun. Tickets are $10 and kids under 16 are free. After the game will be a victory party at the Horseshoe Inn in Saratoga Springs. The party includes food and drinks, live music from the Schmooze, and the opportunity to celebrate both teams. Tickets to the victory party are $30 for adults and $15 for kids under 16.

“This is my fifth year of being involved with BvB Saratoga. I spent three years as a player and am in my second year as a chair of the committee. Being part of BvB Saratoga is a way for me to give back to the community and raise money and awareness for a disease (Alzheimer’s) that is impacting so many families across the country,” said BvB Chair, Kim Lourinia.

“I am so proud of our committee, players, coaches, and volunteers who spend so much time giving back through fundraising, planning activities, and preparing for Game Day which ultimately brings us that much closer to creating a world without Alzheimer's,” Lourinia stated.

“I am so grateful to the Blondes and Brunettes for their dedication and commitment. Not only do they practice hard and engage in an exciting game of football, they raise much needed awareness by engaging a younger generation in our fight against Alzheimer’s,” said Alzheimer’s Association of New York’s Executive Director and CEO, Elizabeth Smith-Boivin.

You can donate to the players and receive free admission to the game by visiting www.act.alz.org and going to the RivALZ link. So far, the Blonde Bombshells have raised approximately $27,520 and the Brunette Bombers have raised $25,320.

To learn more about Alzheimer’s disease or Blondes vs. Brunettes, visit www.alz.org.