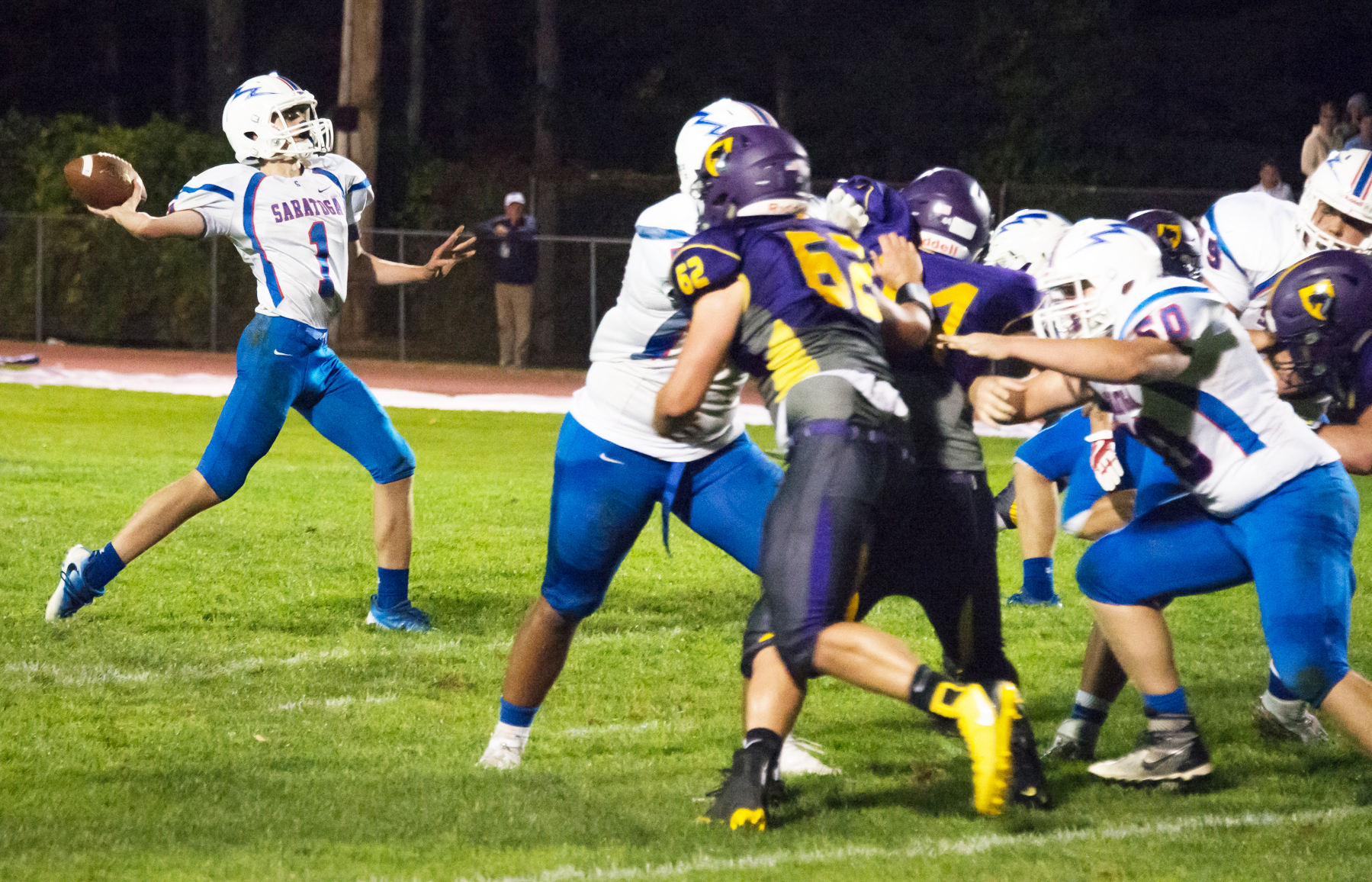 How is it possible that three local teams can all be undefeated? The teams represent different classes and leagues, based on school size, with Saratoga being the largest of the classes, Section 2 Class AA, in the Empire Football League. We sat down with each coach this week to get their take on the current season.

Coach Matt Shell is very happy with how well the season has gone so far.

“The kids are working hard, we’re excited to be in the position that we’re in. We have a big game this week and we have to make sure we’re ready to play at such a high level.”

He’s happy with his offensive line and continues to see improvements on the defensive line, which has a few new players this year.

“Our defense has improved week to week,” he said.

In game one, they played Queensbury, which Shelly described as a “real good game.”

Averill Park was a tough team to beat but they were able to thanks to making some big plays at key times in the game.

“The team just works really hard and they’ve been doing a good job. Their work ethic has been good and fundamentally, they do a good job of working on the basics of the game to improve,” Shell said.

With practices Monday through Thursday, the Spartans stay busy and motivated.

Coach John Bowen is equally enthusiastic about his team’s season.

“I would definitely say to this point that the success we’ve been able to have has been a direct attribute to the way the kids work Monday through Thursday. Friday nights are for them. It’s their time. You allow them to showcase everything they’ve worked for. We’ve got a great group of kids who are willing to listen to and employ anything we ask of them,” Bowen said.

Bowen makes sure that the team stays focused on the week ahead and nothing beyond that.

“I’ve been very proud of the fact that the boys have really kept their focus and not allowed themselves to get ahead of the schedule in any given week. They’ve been really dialed into that week’s opponent,” Bowen explained.

Coach Terry Jones is making a comeback after last season.

“I think it’s great to be at this point, especially considering all of our games have been in our division. Winning our first five games has secured us the number one seed in the Empire Division, which guarantees us a playoff game in week eight and in week nine if we win the game in week eight. That’s one of the goals we set out with, was to win our division. We’re not looking past any of our goals as far as the rest of the season goes, we’re focusing on Albany this week,” Jones explained.

Last season was difficult for the Blue Streaks, they had a number of injuries and were unsure of how the team would perform this season.

“We knew the talent was there,” he said, “and we knew that if things came together we could get to this point, but you never know how 16 and 17 year-olds are going to perform when the lights go on.”

Saratoga Springs will have their homecoming game on Friday, Oct. 6 at 7:00 p.m.

Check back on the Saratoga TODAY Newspaper Facebook page after the games this week for updates.