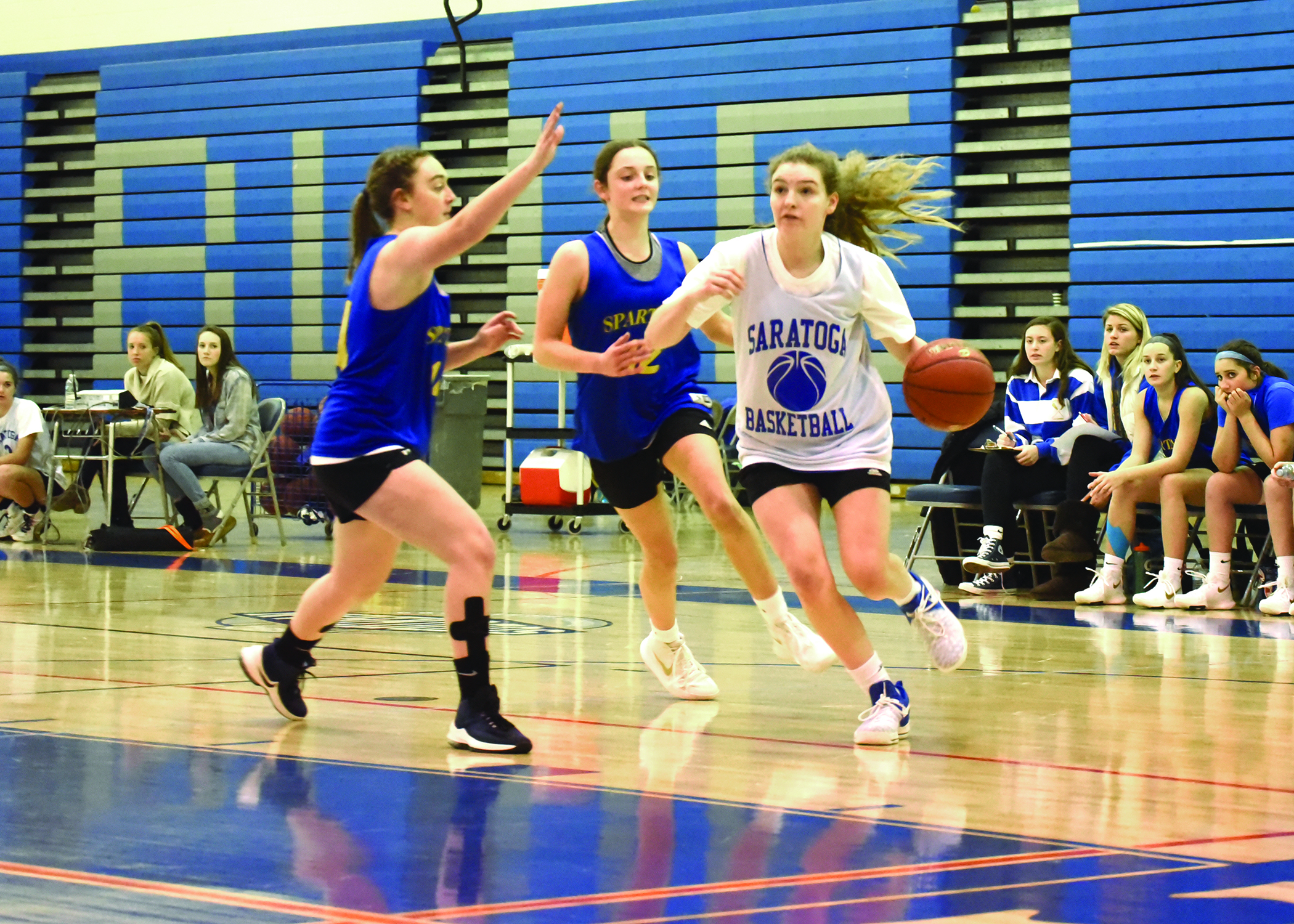 With 13 girls on the team, five of which are seniors, Chudy is grateful for the scrimmage opportunities the team has before officially starting the season.

“It’s always good to compete. We’ve been practicing a lot so to get out and compete against other teams is a good thing. It gets the girls kind of excited for the season to start,” Chudy said.

The team has already seen a few sprained ankles and one ACL repair this pre-season, so it is safe to say that scrimmaging was a nice way to pull the team together in a competitive atmosphere. Chudy spoke of her four key players warmly. Dolly Cairns, a sophomore, is described by Chudy as the teams’ “go-to person when there is five seconds left on the clock.”

“Cairns handles the ball, handles the pressure, she handles the leadership out on the court. She has a great outside shot, she can drive to the basket, and she plays solid defense,” Chudy said.

It is clear to see why Cairns would be Chudy’s point-guard, she was brought up to varsity halfway through her seventhgrade season.

Kerry Flaherty, a junior who has been on the team since her eighth-grade season, is another player to watch.

“She’s a solid overall shooter, she’s fast, she’s quick to the basket, and she runs the break really well. She’ll be another person who will lead us in scoring, tempo, and pace. She and Dolly are both able to see the court well so the two of them will be huge for us,” Chudy explained.

Briann Barringer, a senior and captain for the team, has been described by Chudy as a “work horse.”

With three other captains to help Barringer lead the team, she is able to put in work as a small forward.

Barringer will “get to the ball, she’ll grab rebounds, she’ll have put-backs. She will add a lot to our team as well as her defense and her ability to get to the basket,” Chudy said.

Barringer is a captain along with senior guard Kara Vamvalis and senior small forward Amanda McGinn. Kara Vamvalis is being counted on to take the pressure off the other two guards.

“Kara is going to be pretty big for us this season. She is a very good outside shooter, she’s so fast. We’re going to look to her to take some of the pressure off the two guards. She’s a very good shooter, I think she’s really going to help us a lot,” Chudy explained.

Chudy said their biggest challenge this season will be, “putting together our defense the way we want to. Our offense has a lot of shooters and very good, very talented, shooting guards. It’s going to be our solid overall defense, being aggressive, playing hard, rebounding, and getting boards. Defense will be our focus because we are pretty skilled offensively.”

Chudy considers the games against Shenendehowa as the teams’ biggest of the season.

“They have a great team and we always seem to compete with them. We haven’t been quite able to get the win, but we always have a great game with them. The girls are always pumped to play with them so I think it’s going to be another great couple of games when we play them,” Chudy said.

Friday, Dec. 8 marks the first official league game of the season and will be played against Schenectady High School at Saratoga Springs at 7 p.m.

More in this category: « YMCA: Not Just A Gym, A Community Saratoga Springs Boys Basketball »
back to top