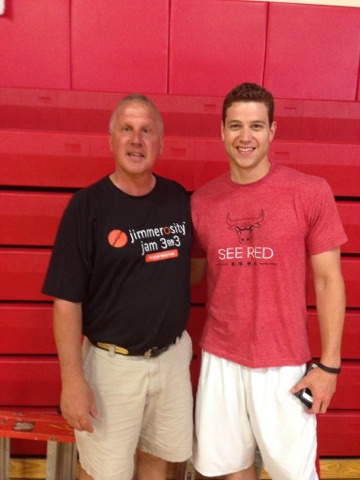 Starting in 1991, “we started off with good athletes and it took a lot of work to get us to a point where we were successful year in and year out. In order to get to that point, I had a lot of help. I had a great assistant, Dave Casey, JV coach Steve Zurlo, and the parents that we had of the kids that were playing for me, they were great. They’d take the kids to different tournaments during the summer and the off-season and it was just a lot of people helping get to where they are right now,” Hammel reminisced.

Hammel remembers all his teams, some for humous reasons.

“On our 1999 team, we didn’t have anybody over 6 foot on that team. We were fortunate enough to make it to the state tournament, anyway. Those kids were tough, hard-nosed, grinded out, defensive players. They were fun to coach and fun to watch. People would watch us warm up with that team and they’d say, ‘who are these guys? What are they doing here?’ They were small, but they were tough.”

Hammel remained humble in his coaching career, always surprised when year after year, his team moved forward in sectionals and, twice, to states.

“Our first time we got to go to the Civic Center was in 1995, that was the biggest deal. I remember getting cards from elementary kids and different things like that saying, 'congratulations, you made it to the Civic Center,' and we got beat by 40 points. Two years later we made it again, and we got beat by 42 points. Then in 1999, we made it again and we won our first sectional championship. That year we went out to LeMoyne to play in the regionals and we were fortunate to win out there. We then went back to the state tournament at the Civic Center and that was a huge event. The hometown team coming back and I said, ‘you know what? This is never going to happen again, I can’t see it happening,’” Hammel said.

However, in 2003, the Indians were back at the Civic Center, winning another sectional championship, made it back to states again as a result, where they won their first game in the semi-finals and lost the second game by 20 points.

“I always say we won half of a state championship because we were up three points at halftime,” he laughed.

After 2003, Hammel didn’t think states would happen again, “and then Jimmer comes along with that group. Even though Jimmer was a great player, he had some real good players around him,” Hammel said.

“We went down to the draft and just to see the excitement and everything around Jimmer was pandemonium. It was surreal. We went to his final game at Brigham Young University his senior year and we all went out to dinner afterward, and people would stop his car just to get his autograph. He was like a movie star,” Hammel said of Jimmer Fredette.

Hammel taught third and sixth grade in the district and always said, “I had the best job in the world. It was great, I went from eight-year-olds all day and then I was able to work with sixteen to eighteen-year-olds. A lot of the time, I always told my team, my eight-year-olds were smarter than them,” he laughed.

“I had a lot of support throughout my career, including my wife Pat. She filmed all our games, she helped with the organization and paper work with our Super Hooper Camp, and she even made lasagna every Sunday for the team to enjoy after practice in the early stages of us building the program. She was an intricate part of us being successful,” Hammel said, praising his wife.

“Coaching was a great experience, something I’ll never forget. I was very lucky to have the job that I had,” Hammel said as he pulled into the golf course.

After retiring from coaching in 2015 and teaching in 2016, Hammel took to the golf course and started enjoying his time off.

More in this category: « YMCA Annual Kick Off Campaign The Stretch at Saratoga Race Course »
back to top