Justify Running for the Triple Crown 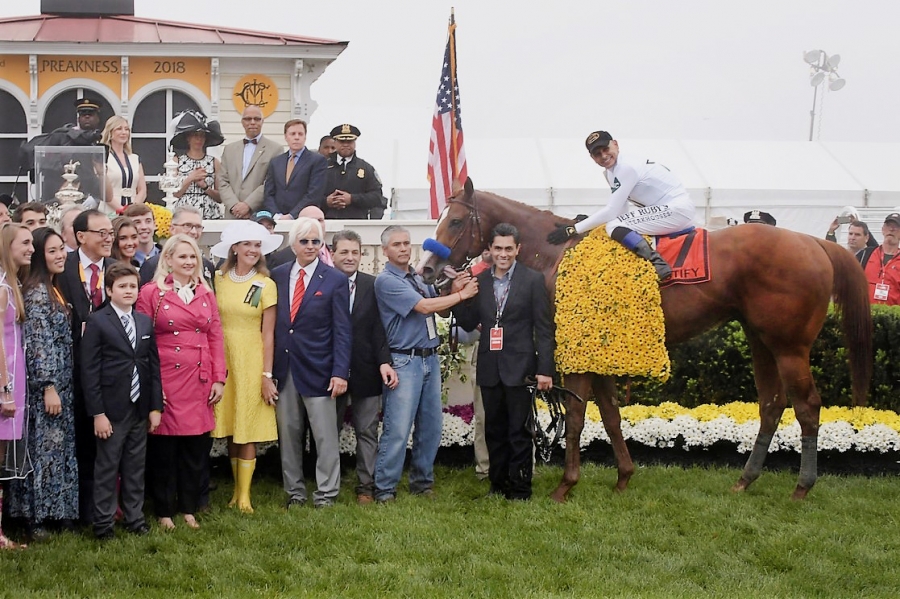 SHOULD JUSTIFY win the Triple Crown on Saturday, I’d be lying if I said it wouldn’t feel a little cheap.

Two weeks ago, Justify’s greatest challenger, Audible, was withdrawn from the Belmont. He finished third in the Derby, and few trainers use the Kentucky Derby as a Belmont Stakes prep the way Todd Pletcher can.

Pletcher has won three Belmonts, two from colts who previously ran in the Derby (Palice Malace, Tapwrit) and one filly, Rags to Riches, who won the Kentucky Oaks the day before the 2007 Derby.

The real snag about this conflict is that Justify and Audible share similar ownership interests: WinStar Farms. Justify’s ownership group looks like a royal flush with the China Horse Club, WinStar, Starlight Racing and Head of Plains Partners all chipping in on vet bills.

Audible posed one of — if not the — biggest threat to Justify. Eliot Walden, CEO of WinStar, maintains it was Pletcher’s decision.

Now, this could be the case. When you’re not around the horse, feeling his legs, and watching him eat and gallop all day, you have to take trainers at their word. If a horse doesn’t run well out on the track, you take the jockey at their word. After all, they’re the experts, the ones in direct contact with the horse, and here’s the rub—the horse can’t talk so we rely on these translators.

But there’s nothing Prime about this Audible business. The ownership group footing Justify’s bills have several dozens of millions of dollars at stake should Justify lose and because WinStar conveniently owns the principle threat to Justify, it was able to cheerfully withdraw the horse and lay it all on the trainer. Why beat yourself?

As Pat Forde of Yahoo Sports wrote, “The outcome of the Triple Crown could come down to a business decision, not a sporting competition.”

When an owner/farm has a Grade 1-calibre horse, it’s just as bad a business decision not to run him in the Classics. If Audible wins, there’s another mega-stallion.

They likely broke out a new Excel spreadsheet and did some serious P&L crunching on the math of Audible beating Justify with the math tipping the scale several million in favor of Justify.

Still, the absence of Audible doesn’t mean it’s going to be easy for Justify because there are several horses capable of winning. And you never know what the weather will do. As of this writing, there’s a 50 percent chance of rain (bonus for Justify) and for a high temperature of 70 degrees (bonus for all contenders and fans alike.)

The presumption that eliminating Audible from contention secures Justify’s chances reeks of the hubris of 10 years ago, when trainer Rick Dutrow, IEAH and Big Brown entered the Belmont Stakes the prohibitive favorite and, as Dutrow put it, a “foregone conclusion.”

It was hot and humid as a sauna that day, Big Brown got stepped on, and eventually jockey Kent Desormeaux, no doubt hearing the ringing of Eight Belles in his ears from five weeks prior, eased Big Brown and did not finish.

Nobody in Justify’s camp has been as brash as Dutrow because Justify still has his work cut out for him, this from a colt who didn’t race at two and started his competitive career two weeks after Groundhog Day.

The Preakness was his only sub-100 Beyer Speed Figure, but that came on a taxing track, a track that saw D. Wayne Lukas’ Bravazo come screaming up to get second. In the gallop out, Justify re-engaged.

Justify will have company on the lead with Noble Indy, a possible rabbit for Vino Rosso. Bravazo will be running late and will look to give Lukas another Triple Crown race.

All this said, when you step back and objectively look at the gift that is the Belmont Stakes with a Triple Crown on the line, few things are better than the three-week anticipation, the butterflies that accompany the loading of the gate at the start-finish line and the subsequent nausea of watching the favorite try and hammer it out for two and a half minutes in the Test of a Champion.

“I think it brings our sport to the very highest level and becomes the most exciting sports event arguably that there is,” Pletcher said at the post draw. “It puts us right on par with the Super Bowl and the World Series. I mean, the Belmont on its own is a tremendous event and a tremendous race, but when there’s a Triple Crown at stake, to me there’s nothing like it.”

Read 1394 times
More in this category: « Man O’ War, The Champion of All Champions Fun Run Breaks Records »
back to top