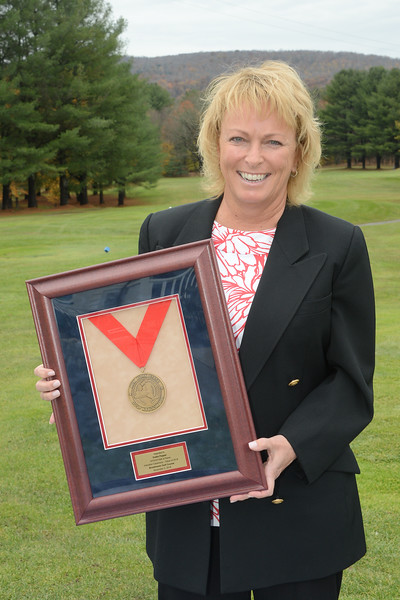 PORTER CORNERS — It was a special evening Friday, November 2 at Brookhaven Golf Course, as over one hundred distinguished guests and golf enthusiasts from around New York gathered to celebrate the induction of four new members into the New York State Golf Hall of Fame (NYSGA). The 2018 class included Walter Hagen of Rochester, Gene Sarazen of Harrison, Dottie Pepper of Saratoga Springs, and Willie Turnesa of Elmsford. Pepper first learned the game at Brookhaven and discovered her passion for the sport as a junior member. The sentimental value it holds to her early days of golf was naturally why the venue was selected to hold this year’s induction ceremony.

“A significant part of my youth sports experience was spent on this very road. I learned to play golf here. First big course I ever played and Alpine Meadows is where I learned to ski,” said Pepper.

“When I played golf here it was $100 for a summer membership for junior golfers. It’s still only $200. It is a haven of what is really great about this game,” Pepper continued.

The night began with a cocktail reception and dinner, followed by the induction ceremony. To get things started, NYSGA President Warren Winslow of Western Turnpike, and Hall of Fame Chairman, Joe Enright of Lancaster Country Club in Buffalo, briefly introduced the committee, their selection process, history of the Hall of Fame and lastly, recognized past inductees. Only one Hall of Fame member attended the induction, NYSGA committee member Tom Reidy of Elmira (class of 2015). Presented first were the late golf legends Hagen and Sarazen, represented by NYSGA Hall of Fame committee members Dick Galvin of Ontario Country Club and Doug Vergith of Chautauqua Country Club, respectively. Next was the late Turnesa, who was represented by his daughter Polly and son-in-law Reed Sparling. They honored Willie by sharing old stories and special sentiments he’d mentioned to them over the years.

“We know Willie would have been so honored to enter the hall of fame. If he could have been here, we know he would have been even more thrilled to shake your hand and share his stories with people, who, like him, receive such joy from the game,” said Reed in closing to the audience.

Last to be honored was Pepper, the lone inductee in attendance, who was surrounded by tables of family and friends that came out to be a part of the special evening. Her close friend Kimberly Galvin-Janelle was selected to introduce Pepper and shared some memories from their longtime friendship and reflected on all her great achievements. Dottie graciously accepted the award and spoke on selecting Brookhaven and George Pulver’s significance to her.

“This is an essential rung, or rung on the ladder of what I really consider the great golf experience to be, because it is the complete experience. This place is the heartbeat of its community, it’s owned by the town, it was gifted from a corporation. I think the choice of this location was sort of full circle, because designer architect George Pulver knew all three of these other distinguished honorees. He was a big reason why I became a golf architecture geek. He was a rockstar before we even knew what a rockstar was,” Pepper said.

She described her experiences at the NYSGA championships each summer, and her memorable wins.

“As I look back winning in championships in New York, I have a couple of favorite moments,” she mentioned.

What Dottie was especially drawn to about the NYSGA was a former committee member who passed on in 2016, Betty Deeley. She was also inducted into the NYSGA Hall of Fame, in the inaugural class in 2012.

“She was a devoted supporter of everything that happened at not only the New York State Golf Association but particularly the girls and women’s events. We were always referred to as Betty’s girls. She loved what she did with especially the young girls in the state,” she said.

Although none of Pepper’s current colleagues at CBS Sports could attend, notable broadcaster Jim Nantz surprised Dottie with a special video message demonstrating the network’s appreciation of her achievement and congratulations for the welldeserved honor. The night finished with closing remarks from NYSGA Assistant Executive Director Andrew Hickey thanking everyone for their attendance along with final congratulations to the inductees and their families. There are now 17 members of the NYSGA Hall of Fame. The next NYSGA Hall of Fame class will be announced in early summer of 2019.

More in this category: « Athlete of the Week: Tucker Wurtmann Local All-Star Moments »
back to top