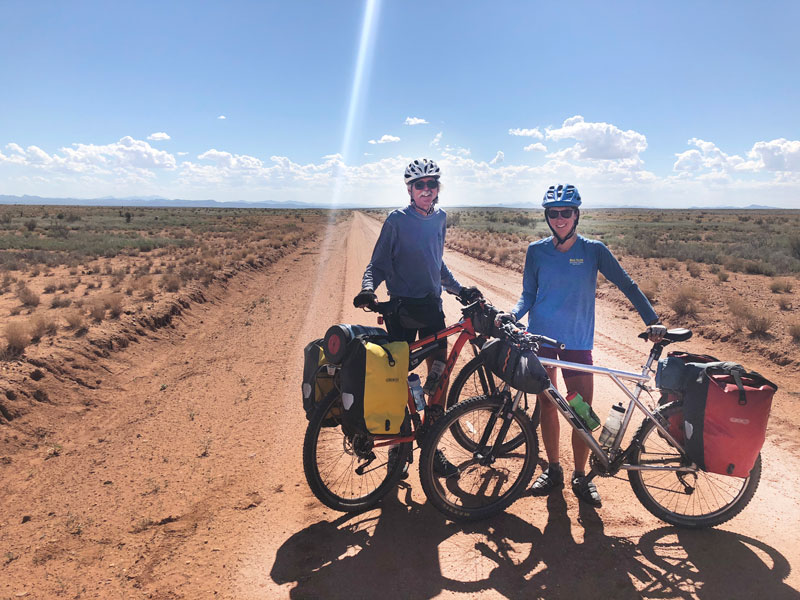 SARATOGA — In mid-July of 2018 Steve Mackey and his daughter Heather Mackey set out to complete the Great Divide mountain bike route. The trek took two whole months to make it from Jasper, Alberta to the Mexican border in Antelope Wells, N.M. The total route: 3,335 miles according to their bicycle odometers.

The two used a mobile application called Adventure Cycling. It is also a non-profit that put together the Great Divide bike route about 20 years ago, according to Steve Mackey. Mackey says he has had his eye on this route for some time and knew it was something he wanted to do if he had the time. The application showed both Steve and Heather where they were at all times and helped them keep track of their mileage.

The Great Divide mountain bike route follows the Continental Divide hiking trail; it crosses it about 32 times. At some points the crossing spanned 22 miles. Mackey says nearly 80 percent of the route is gravel roads, 10 percent is pavement and 10 percent is single-tracked. Single- track is a type of mountain biking where the trail is as wide as the bike.

Mackey says throughout the whole duration of the trip, he and his daughter saw about 50 people also on the trail. However, many just bike parts of the trail. A lot of days they saw no one. Because they were in such remote areas most of the time, Steve and Heather had to be prepared in case a grizzly bear was present. Steve would have bear spray on hand in his fanny pack and Heather would be ready to record.

“We never did see a grizzly, we saw a black bear and we saw the tracks a few times,” Mackey said, although they had friends that did see one.

Most nights they pitched tents and slept at campsites, some had running water and an outhouse other nights they slept just off the bike route. Out of the whole two months only 10 nights were spent in a hotel or motel.

“If we were in a little town that had a hotel, we would stay, charge our electrics,buy more food, take showers and stuff, and do laundry,” Mackey said.

Throughout the two-months, both Steve and Heather had the adventure of a lifetime that included getting bogged down in impassible mud in New Mexico, where the mud is so bad some bikers abandon their bike.

“It’s so sticky that just putting them in the water doesn’t make a difference, you actually had to scrub them to get it off,” Mackey said about the mud stuck to his bike tires.

Everyday the bikers are carrying between 25 and 40 pounds of travel equipment, necessities and non-perishable food. “The more calories the better,” Mackey said. Their diet consisted of soda, granola bars, candy, fruit, fruit pies, nuts, macaroni and cheese or spaghetti for dinner and the occasional café stop.

“Soda tastes so good when you’re out there and you’re hot and dry,” Mackey said.

Near the Colorado River, Steve was unfortunately hit by a kayak attached to a truck. At this part of the route, he was on a gravel road with many vehicles commuting to a rafting festival.

“All of a sudden a bus went by and they kind of yelled, you know you only got a split second, and they had kayaks sideways that were wider than the bus and one of them cut me in the head. I had helmet on but it knocked me in the brush. They saw that they hit me and they stopped and got out to see if I was okay,” Mackey said.

“So it was kind of a minor thing, but at the time quite a surprise,” he added.

At the very end of their trip, Steve and Heather had their bikes stolen while at a restaurant in New Mexico. Fortunately the bikes were found.

“Heather said she was just happy to get the bikes back and didn’t press charges,” Mackey said.

“They were only missing for 15 minutes,” he added.

Mackey recommends the trip to anybody who is interested. But he probably will not do this route again; he says it was something on his bucket list.

“It’s such a unique opportunity. She’s (Heather) engaged and when you get a full-time job and are married you can’t do this stuff with your good old dad anymore,” he said.

On Jan. 16 at 7 p.m. Steve and Heather Mackey will be at the Crandall Public Library in Glens Falls to talk about their journey. The event is part of a monthly program series hosted by the Glens Falls-Saratoga Chapter of the Adirondack Mountain Club. It is free and open to the public. For more information email Sarah King at This email address is being protected from spambots. You need JavaScript enabled to view it.