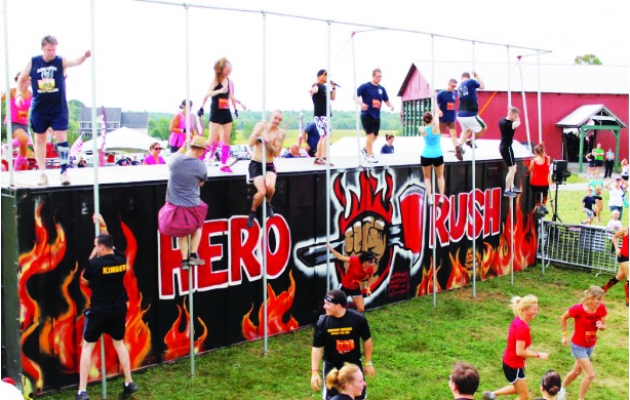 These are just a few of the simple descriptions thrown around when talking about Hero Rush. The firefighter-themed obstacle run enters its second year in existence with a full schedule of 16 stops around the country, including their May 18 date at Ellms Family Farm in Ballston Spa.

An obstacle run consists of a dozen or more obstacles spaced out over a roughly four-mile course. From there, competitors stop at each station and cannot continue until it’s been completed. Some are muddy, others are wet but all of them are designed with one goal in mind: fun.

“It gives the average weekend warrior a chance to go out and have fun at a family-fun event that’s also pretty challenging,” said Hero Rush event director Stuart Kaul. “There are about 17 obstacles over four to five miles of running. It’s a fun day; it’s going to be tough and challenging but worth the reward of completing the course.”

The run enjoyed a wildly successful first year, which included a stop in Saratoga County last year as well. Kaul says the idea for Hero Rush was planted after one of the founders thought the obstacle course he had just completed was much too simple.

“Hero Rush is owned and co-founded by two firefighters from Baltimore,” explains Kaul. “One of those firefighters ran a race that was kind of similar to ours about three years ago. After he finished, being a lifelong firefighter, he thought what firefighters go through during training was a lot harder than what he had just done there. He decided to create his own themed-obstacle course and base the obstacles on scenarios of what a firefighter might encounter on a call.”

While devoid of any real hazards firefighters might encounter such as actual fires or toxic smoke, the obstacles take on real-life scenarios which firefighters encounter on a daily basis.

“Firefighters might go to a hoarder’s apartment, if it’s caught on fire and there’s junk everywhere. One of our obstacles is called ‘Hoarder’s Hell,’ which is fully of couches, garbage and smoke. You have to climb up a ladder, in through a window and into the ‘apartment’ and make your way through and scale back down a ladder. It certainly isn’t on fire or anything like that, but people get the idea.”

Hero Rush is scheduled for May 18 beginning at 8:30 a.m., which will feature the only competitive heat of the day. The rest are designed for fun, whether it’s with a group of friends or a way to spend time with the whole family.

“We’re very family-friendly,” adds Kaul. “We have one of the most legit kids’ courses on the obstacle-running nationwide series.  We put a lot of time into creating a fun experience for mom and dad as well as the two junior races we have.”

Registration is currently open and costs $75 until March 29. From there, late registration will be open until May 3 and costs $80. Finally, you can register up to three days before the race but it will cost you $89. You can sign up online at www.herorush.com/events/new-york. Registration includes a runner’s bib, Inferno Tour T-shirt, meal voucher, a completion medal and full access to the Hero Rush course.

The children’s course costs $15 and includes a medal and T-shirt. Spectators are welcome free of charge.

Kaul says the venue for the Hero Rush, Ellms Family Farms, has been a gracious and enthusiastic host, helping make the Hero Rush as much of a success as anyone.

“We’re coming back to Ellms Family Farms. We were there last year and the Ellms family is just a fantastic partner and they have a great venue. We’re going to be able to put up about a four-mile course on their farm and scatter our obstacles throughout.”

At 11 a.m., the Hero Rush runs what they call the “343 Wave” which is named in honor of the men and women firefighters lost in the events of 9/11. Each runner wears a commemorative bib with the name of a fallen firefighter inscribed upon it. It costs an extra $10 to run the 343, which will be entirely donated to the National Fallen Firefighters Association. The Hero Rush will also match each runner’s donation that day.

Families, friends and groups representing various firehouses and EMT units all turn out to run in the event. There are sometimes even funny costumes, which the organizers definitely encourage.

“We have people run in costume all the time,” said Kaul. “We’ve got some pretty wild and crazy costumes. If you look on our Facebook page, you’ll see some of the crazy things people wear.”

While it’s one thing to read about Hero Rush, it’s quite different to actually experience it. Between the themes, the obstacles, the costumes and the excitement, it’s more than just a fun run.

More in this category: « Saratoga Rowers Take Gold Saratoga Hockey Off to State Semifinals for Fourth-Consecutive Year »
back to top