Andrew Phillips: Athlete of the Week 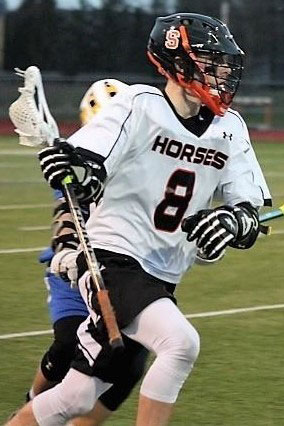 Phillips dabbled in a few sports throughout middle school before his finite spring sport switch from baseball to lacrosse. What prompted the switch? An opportunity to remain close to his friends who were all joining the lacrosse team that spring.

While he also plays soccer and basketball, lacrosse is by far his favorite sport as it is always fast-paced.

"Especially when you're a midfielder you always have something to do,” said Phillips. You're never gonna be caught just standing around on the field. The game is always changing, coming at you so fast; it's so exciting."

The excitement doesn’t go away off the field. Phillips can be referred to as the team’s “hype-man,” as he takes pride in often being the first one to get visibly excited and energized before each game.

His abundance of energy and motivation comes from within as he is consciously mindful and a visual thinker.

“I just kind of picture myself having that one big play or that one big shot…picturing myself just going out there and just having fun; there's nothing better than that. I just really get into the game that way,” said Phillips.

Phillips is grateful to his parents for all their support from being his biggest fans to the time and effort they have also dedicated to his athletics.

"My dad ended up building my first net, which I have to this day... My mom, she used to drive me out to practices - I always had her for that."

His father is not only one of his biggest fans, but he is also Phillips’ biggest inspiration, alongside his fellow teammate Justin Carte. Phillips sees both as fine examples of what it takes to be a high school athlete.

As the season came to an unfortunate end, with a loss to Briarcliff in the sub-regionals, Phillips will remember the fun time’s he’s had with his team as he continues to the college of Saint Rose.