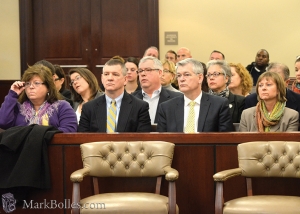 A Measure of Justice for Amy Stock and Her Family

But these are the most important stories to write. They are written with the hope that we will never have to write stories like this again – though we realistically know that the best we can hope for is to write them less often.

This is ultimately a story about choices. Bad choices. And worse consequences.

During the early morning hours of July 19, 2015, Amy Stock was driving home from babysitting in Albany when a drunk driver struck her vehicle. A drunk driver who sped into Amy’s car at the intersection of First Street and Henry Johnson Boulevard at 75 miles per hour – more than double the speed limit – after being observed driving through three stop signs. A drunk driver who did this after first sideswiping several parked cars and made the bad choice to keep going, despite officers on patrol’s commands to stop. A driver who made the bad choice, the fatal choice, to operate a motor vehicle with a blood alcohol level of .27 percent; nearly three times the legal limit.

In so doing, he took the life of Amy Stock – a woman in the prime of her life. A woman whose life was dedicated to enrich lives, not just those of Saratoga residents (for activities such as the co-founding of Sustainable Saratoga) but also the lives of many in the greater Capital Region and beyond. This is a story about choices, and we make the choice to not call the killer by his name. He is the drunk driver who became the killer.

At the killer’s sentencing in Albany County Court on Tuesday, January 12, he got to hear about all this and more – he got to hear about the damage he had done. He got to hear the truth – from a family who was severely wounded, but found, through each other, the strength to see the process through, and make sure that the killer – the drunk driver who made bad choices – faced the consequences for his actions.

The Stock family members read statements that were united in loss, yet each came from a personal perspective. One by one the statements came: From sisters that grieved that they could have “no last goodbye”; that the anguish of a broken heart outweighs struggling with cancer; from brother Charles, who told how he now regards driving through an intersection as “Russian roulette,” of discovering an email his son Brandon wrote to Amy after the tragedy, with the subject line: Goodbye. “You were an awesome aunt,” the email said; from another brother, Matthew, who used to work in an ambulance but could not now – lest he come upon another DWI scene. The killer heard from brother Tom, who first read the statements from Amy’s anguished parents (Mary Ann and Arthur) and then showed a video that captured Amy’s spirit: Pictures of her from childhood as the sixth of seven siblings through adulthood, coupled with voicemail messages from Amy that captured both her zest for life and the dramatic sense of loss at this moment.

After hearing all of this, and more, Prosecutor and Vehicular Crimes Unit Bureau Chief Mary Tanner-Richter asked that the maximum sentence be given under the plea arrangement guidelines. The Honorable Judge Stephen W. Herrick then handed down the first sentence for a conviction for Aggravated Vehicular Homicide in Albany County to the person who made bad choices on July 19.

The drunk driver, who became a killer, is now a number. He was given 8 to 24 years in State Prison.

Afterwards, Tom Stock, speaking on behalf of the family, expressed the family’s gratitude for the work of several agencies including the Albany Police, District Attorney and Vehicular Crimes Unit as well as Judge Herrick for providing a measure of justice for Amy. Perhaps someday, it will provide a measure of closure, as well.

One of Amy Stock’s goals for this year was to publish her book. The family has published River Stories: Healing Through Nature and Rivers posthumously on October 15. All proceeds from the sale of this book are going to the Amy Stock Memorial Scholarship in Sustainability at SUNY Empire State and/or a scholarship in Amy’s memory at Gloversville High School. It is available at Northshire Bookstore and via amazon.com.