Skidmore College Ice Hockey: Back on the Ice 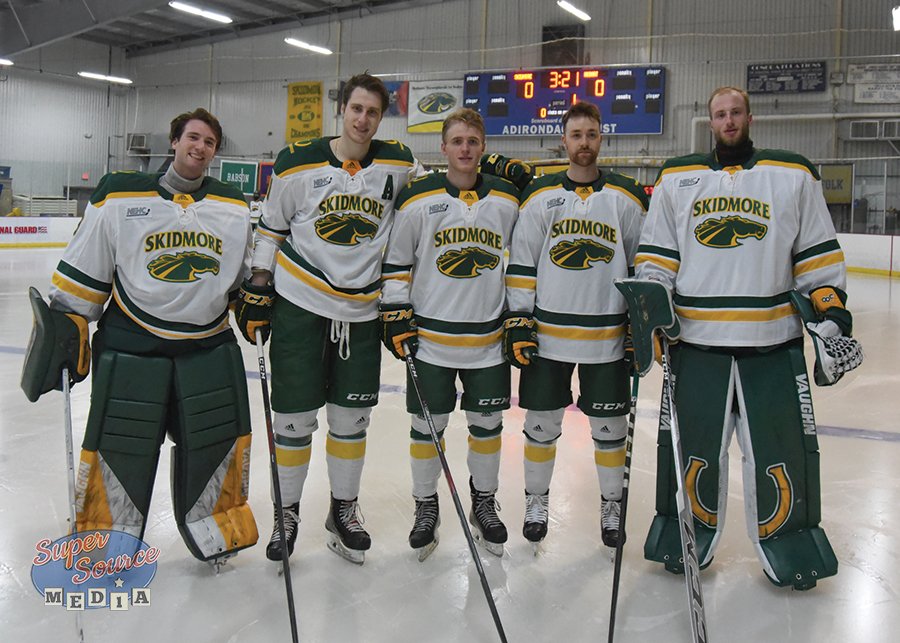 SARATOGA SPRINGS — Skidmore College Men’s Ice Hockey Team had their first and only games this past weekend on Friday, March 26 and Saturday, March 27 against Hobart College.

All of the games prior for the Thoroughbreds had been cancelled due to other colleges’ COVID protocols, or their own COVID protocols – varying reasons every game.

“It’s great to be back on the ice in a game setting, after many trials and tribulations,” said Rob Hutchison, Head Men’s Ice Hockey Coach. “We just couldn’t get over the hurdles to get to a game until Hobart.”

The home/away weekend series were exhibition games. Skidmore lost 1-0 on Friday. Hobart’s Zach Tyson scored the lone goal in the first period of the game, with assists from Travis Schneider and Aaron Maguyan. Skidmore’s goalie Brian Kowalski had 42 saves, 19 of them in the third period.

They lost again on Saturday at Hobart, the final score being 4-1. Tyler Hall scored the only goal for the Thoroughbreds in the third period, with assists from Everett Wardle and Mike Gelatt. Danny Lassman had 18 saves in goal for Skidmore. Kowalski had 14, and Tate Brandon had 20.

The team had been practicing like it was a regular season right along. After about eight weeks of practice in the fall, they had a two-month break from Thanksgiving until January, instead of their usual 10-day rest. Although there were no spectators allowed at the games this past weekend, they still honored their five seniors - Danny Lassman, Matt Muzyka, Misha Mrotchek, Tyler Hall, and Brian Kowalski.

“They are awesome people on and off the ice,” said Coach Hutchison. “In terms, of leadership, they kept the team motivated and excited to get out on the rink. They put a positive spin on things.”

Next season, the team is looking forward to a fresh start after an exhausting season this year. Coach Hutchison is hopeful that they will be able to go into summer training with some sense of normalcy.