SARATOGA SPRINGS – Lake Avenue Elementary was one of 42 schools in the country selected to pilot Project Lead The Way’s (PLTW) LAUNCH curriculum, in which second-grade teacher Nancy Ferguson now writes ‘engineering’ as a subject on the chalkboard along with science, math, English and writing.

With only a handful of classrooms participating in the experimental format to enhance science, technology, engineering and mathematics (STEM) understanding at the elementary level, Ferguson said the main complaint she receives is from parents who can't get child included in the program.

The curriculum is based on introducing formatted modules to the classroom that begin with a reading component, then progresses through tiered problem solving activities, and ending with a project or ‘build’ .

The modules, which take 10-12 hours to complete during the course of the semester, allow the classroom to apply lessons from multiple subjects into a problem-solving activity, Ferguson said and added that it’s a curriculum that she would like to see continue next year. "We don’t just talk about math in isolation," she said. "We apply it."

Six classrooms, one in each grade level, have been leading their students through such modules since November to stir interest in STEM learning as well as another way to reach current common core standards.

This is the opportunity where the "playing field is leveled" for students and teachers, as Instructional Technologist as Saratoga Springs School District Jim Nair said. In areas where students may struggle in one subject, they may have a strength in others that will aid them in completing a project with their partner. All the while, the role of the teacher is been changed into that of a facilitator.

"It can be a little chaotic in the classroom, but the energy is directed at solving the problems," he said.

The topics for the modules this year include Structure and Function of Materials, Forces, Sound and Light, Flight, Energy and Robotics.

"We are asking students to branch out in new ways and allow themselves to learn from their mistakes with the teacher acting as mentor and facilitator," Nair said. "The ongoing goal of this exciting pilot is to allow students to listen, collaborate, investigate and engineer solutions to problems using math, science and technology."

Lake Avenue Elementary is the only school in the Northeast piloting the program. Through its participation, Nair aim to help shape what the program will look like as it rolls out at other schools in the future.

Nair said that the program has so far generated a lot positive feedback from teachers, students and parents in addition to comments for where the project could be improved in the future. 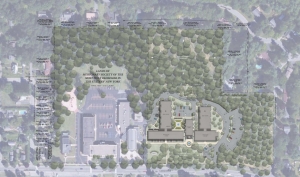 SARATOGA SPRINGS – For weeks, residents had seen the signs.

First, the signs said that The St. John Neumann Residence on the St. Clement’s campus at 233 Lake Avenue was “for sale.” Then later, “sale pending.” And though there was some buzz that the Bonacio Corporation was the pending buyer, the actual development details were a closely guarded secret.

The big reveal took place at the Saratoga Springs City Council meeting on Tuesday, February 18 as a contingent led by Attorney Michael Toohey, The LA Group’s Principal-in-Charge C. Michael Ingersoll, Bradley Birge of the Saratoga Springs Planning Office and Sonny Bonacio detailed plans for an “adaptive reuse” of the residence – converting it into senior housing.

A total of 85 senior apartments have been proposed for the residence. These would not be assisted living facilities but rather accommodations designed for ages 55 and older.

The item before the council, which passed unanimously, was to “merit for review” a change in the comprehensive plan and zoning maps that would re-designate the parcel containing the residence to UR-1, which Mr. Toohey noted was the zoning designation for the surrounding neighborhood, and allow for the senior apartment project to be a permitted use. Currently the building is zoned for Institutional/Educational use.

The design proposed to the council involved minimal modifications to the building’s façade, which Mr. Toohey described as an important building to the city as well as a major “entrance statement” for those entering the city from the East.

The major structural adaptations would not be visible from Lake Avenue. Two additional wings will be built onto the residence’s rear side, and parking will be increased. Mr. Toohey detailed to the council a tree survey that had been completed prior to developing the plan, with the intent of minimizing the loss of trees on the property.

The sale of the property is contingent on the zoning change, and there will be many meetings (before Design Review and Zoning committees as well as further planned neighborhood information meetings) before the zoning modification can actually be made official.

Should the project proceed, there will also be a need to attend to several environmental issues at the St. John Neumann Residence. These include asbestos and mold abatement, the costs of which Mayor Joanne Yepsen noted, in expressing support for the project, had driven other developers away.