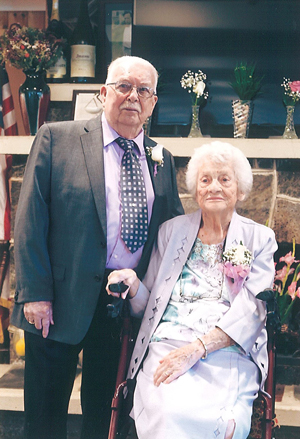 Dorothy graduated from Saratoga Springs High School and SUNY Cobleskill. She was employed by Skidmore College in Food Service and later at Saratoga Springs City School District as the School Lunch Director for 25 years. During this time, she was named to the NYS Skilled Worker Emeritus Program by Governor Mario Cuomo.

Dorothy married Henry Rowland on August 29, 1948, and they recently celebrated 72 years of marriage. She is survived by her husband Henry; brother George; son Dick and daughter-in-law Joan Rowland; daughter Lynn and son-in-law Tom Cumm; and son Stephan and daughter-in-law Rosamaria Rowland. She is also survived by her grandchildren: Shana Cumm and Tom Rupert; Shaun and JoAnne Cumm; Lauren and Rob Delaney; Dominique and Brandon Semzock; and Stephanie and Nicholas Chandler; and great-grandchildren: Landen, Blake, and Avery Cumm; Waylon and Eleanor Semzock; and Emily Chandler. Additionally, Dorothy is survived by her sisters-in-law Ruth Hayes and Norma Potter and by many nieces and nephews.

In addition to her parents, Dorothy was predeceased by her siblings Frances Potter, Chester Potter, John Potter, Laura Roeckle and Jane Potter.

Dorothy was a communicant of Simpson United Methodist Church, Rock City Falls, President and 75-year-member of Greenfield Grange #807, a member of Saratoga County Pomona Grange, NYS Grange, and National Grange. She was past NYS Grange Deputy for Saratoga & Fulton Counties, Co-Director for NYS Grange CWA and Assistant Director of NYS Junior Grange Camp. She was a member and past president of the NYS School Food Service Association and a member of the Saratoga County Agricultural Society as an Ad Hoc for the Culinary Department, Zonta International, and delivered Meals on Wheels for many years. As a member of the Greenfield Historical Society, Dorothy was instrumental in the restoration of the one-room schoolhouse she had attended as a child.

Family, food and community were all extremely important to Dorothy.

The family would like to express their heartfelt thanks to Eileen Beckwith and the Home Instead caregivers who helped take care of Mom over the past year. We would also like to thank Wesley Healthcare for their care and concern in her final days.

In lieu of flowers, donations may be made in Dorothy’s memory to Simpson United Methodist Church, 1089 Rock City Road, Rock City Falls, NY 12863.

Funeral services will be private. Dorothy will be laid to rest at Greenfield Cemetery.

More in this category: « Doris M. (Nee) Lundstrom Pinto  A. William Colonell »
back to top